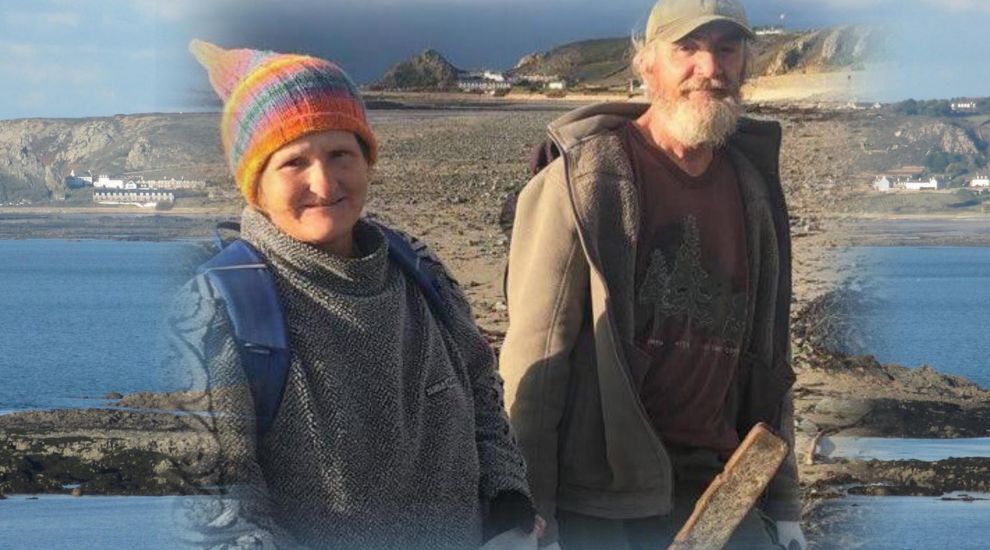 A Jersey couple who can be found litter picking on the beach come rain or shine have been hailed as the island's "unsung heroes" after it emerged they'd been quietly "doing their bit" for over a quarter of a century.

Tracy and Malcolm Vibert have been picking up litter on Jersey's beaches for over 25 years out of their love of nature, but were this week honoured by thousands of people locally, and around the world, after a local dog walker's post praising them went viral.

While walking her dog on St. Ouen's beach, islander Jo overheard Tracy ask Malcolm for "another bag" and noticed the couple were collecting rubbish. She started talking to them and learned that they had been on the beach all day and had filled seven bags with litter.

Inspired by their commitment, Jo was keen to share their "selflessness and dedication" with the wider world. She described them as "two of Jersey's most beautiful unsung heroes", adding that they don't see what they do as anything special. 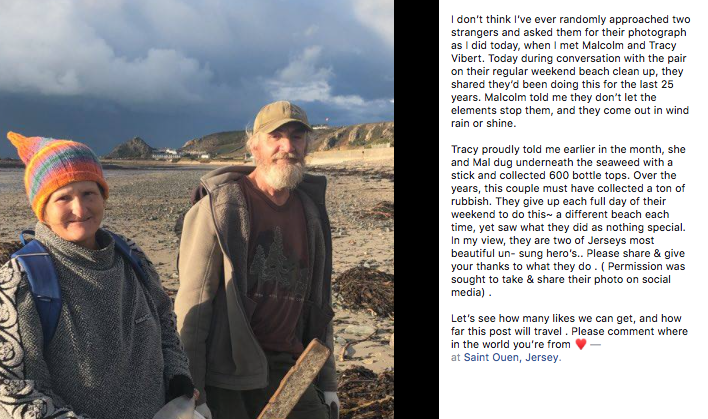 Pictured: In her post, Jo described Malcolm and Tracy as "two of Jersey's most beautiful unsung heroes."

It appears that many felt similarly about the hidden heroes' work, with the post quickly racking up over 3,000 likes and being shared over 1,300 times by people in countries as far afield as Nicaragua, New Zealand, the US and Tasmania - some of whom have decided to use the pair's work to inspire their own communities. "Never in my wildest dreams did I think that my post would go viral," Jo told Express.

Tracy and Malcolm didn't expect that much attention either. "It's just crazy, it's been amazing," Tracy said. "But we are not doing it for attention, we are just passionate about nature and want to give it a chance. We grew up loving the beach and just do it for the nature. We just love nature and the outdoors."

The couple first started sweeping rubbish from the island's beaches long before plastic-free, and Blue Planet-inspired, initiatives had taken over global consciousness. The hobby began when the pair were beachcombing, an activity involving walking along the tideline looking for interesting finds. After noticing bits of fishing gear that had washed up, the couple started taking bags with them on their walks.

They now go out every weekend, all year round, in all weather. 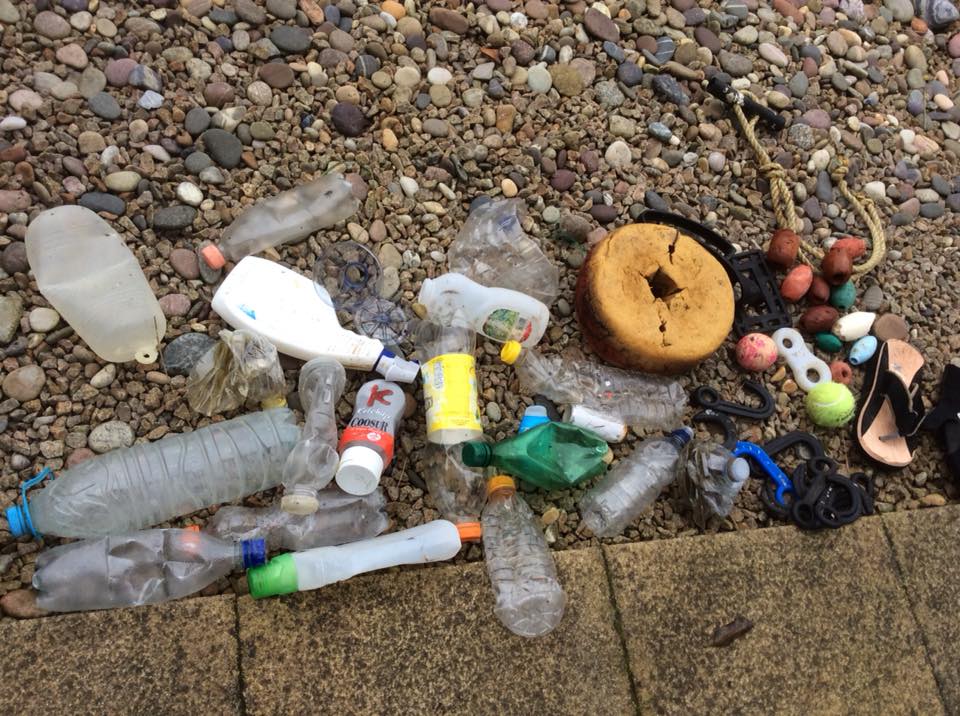 Pictured: Tracy said that she and Malcom now find more single-use plastics than they used to 25 years ago.

Over the years, Tracy says that the amount and nature of the rubbish has changed.

"It's got worse," she explained. "In the early years, we would find rope, strings, broken nets, which didn't necessarily came from local fishermen. It's their livelihood you know and we have some great guys out there that will actually pick stuff up when they see it.

"But now we find a lot more single use plastics. I think a lot of it is down to boats, who throw their rubbish in the sea instead of taking it ashore. We find a lot of medical stuff that can only be coming off boats. You find syringes and tubes so you have to be quite careful and always wear gloves."

But the couple do not always throw away the litter they find. When possible, they recycle or up-cycle it. 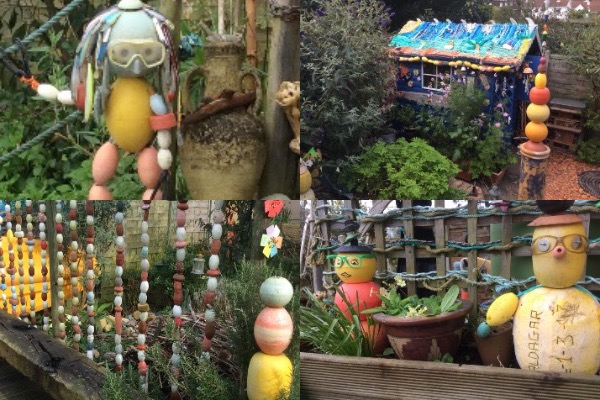 Pictured: Tracy and Malcolm have incorporated their beach finds into their garden.

If they find fishing gear in good condition, they pass it on to fishermen they know, while children's toys like buckets and spades are cleaned, sterilised and then taken to daycare centres and nurseries. Tracy has also up-cycled buoys, fishing rods and oyster bags to decorate her garden shed, and has even used her finds to create a mascot called 'Chucky'.

"It's an ongoing passion. If we are on the beach and we see something, we just pick it up. Even if we are on a walk somewhere else or travelling, we do the same. We are just doing our bit for nature. We are part of a chain of people who actively do something for the planet. That's just who we are."

While Tracy says the couple finds hundreds of poo bags on every beach, one thing they don't see enough of is other people helping clean up. "You bump into a few people but it's not enough," Tracy said. "Since David Attenborough did 'Blue Planet' people have been waking up to the facts. He made it fashionable, which is a fantastic thing."

Demonstrating some of the previous lack of environmental awareness they'd encountered, Tracy recalled: "A lady once thought we were on community service and being punished because she couldn't understand we would pick up rubbish willingly!" 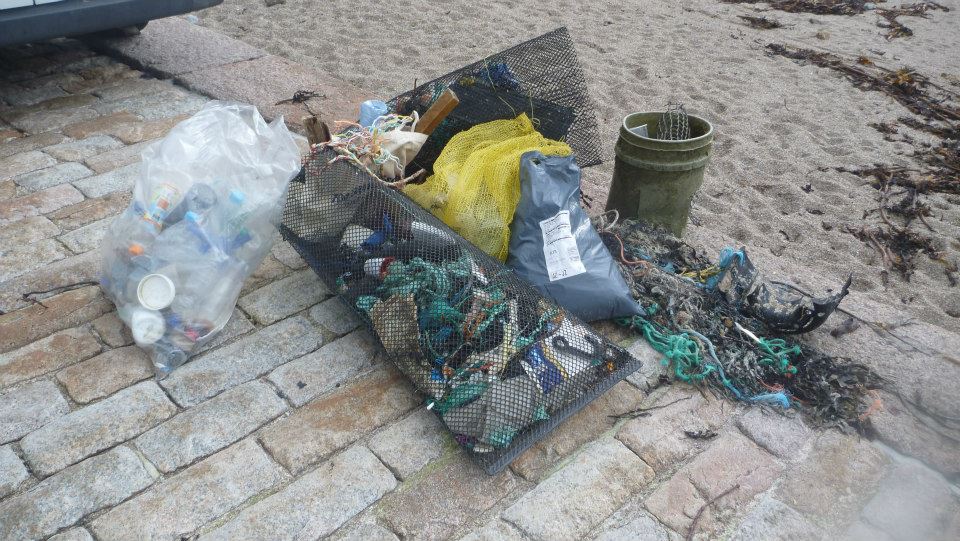 Pictured: "All it takes is one bag," said Tracy.

Habits are slowly changing, but the eco-aware pair would still like to see more action from islanders. "You see more people doing it now, but people still make excuses. It only takes one bag. We only get one chance at this earth and it's not looking pretty good at the moment. It's quite scary! There are over 100,000 people on the island, can you imagine if everybody picked up one piece of rubbish?"

Tracy and Malcolm's dedication has already helped convince others to start beach cleaning, including Jo herself. "After my encounter with Tracy and Malcolm, I was so inspired by their story, during a dog walk the following day, I decided to return back to the same beach with a poo bag and a plastic bag.

"If you can pick up poo you can pick up plastic! It was during this time, I was horrified to find a blood transfusion bag, which appeared to have originated from Hamburg. This still had all the rubber IV leads attached to it."

Jo thinks the island as a whole should encourage beach cleaning. She said it would be great to think up of a slogan which would be posted near beaches and coastal areas or some of the "more palatable images" featured in Blue Planet 2 on items such as milk cartons.

Posted by Chris P Bacon on Nov 28th, 2018
Absolutely delighted that this couple have been recognised.

I briefly spoke to the lady the other week as she was keeping an eye on her husband who had traversed down a very steep passageway to clear an out of reach beach. They do not just look after the ones we see; they look after the ones we don't but our wildlife do! Incredible couple. We should all do more!
To place a comment please login Login »