Last two airworthy Lancasters in world to fly over Jersey 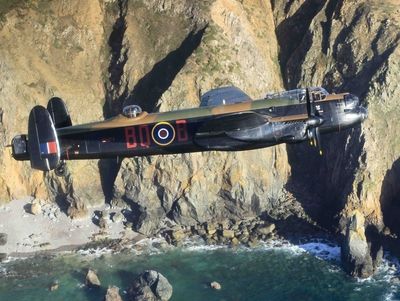 Last two airworthy Lancasters in world to fly over Jersey

Two Lancaster bombers will be flying in this September’s Air Show - the first time more than one has appeared over the skies of Britain since the 1950s.

In a historic first for the Island, the RAF’s only flyable Lancaster will be joined by a plane from the Canadian Warplane Heritage Museum in Hamilton, Ontario.

It will take three days for the plane to cross the Atlantic, stopping in Goose Bay, Greenland, Iceland, and Scotland, before arriving for air shows in the UK.

The plane, which will be accompanied to the UK by a Royal Canadian Air Force Hurricane, was originally due to return to Canada before the Jersey show.

Deputy Mike Higgins, organiser of the Jersey Air Display, said: “We managed to persuade them to stay a little longer and come to the Jersey show too. This will be the first time two Lancasters will have flown in the skies of Jersey, or anywhere else in Britain for over 50 years.

“There are so few of them left, and the Canadians are just as short of planes as we are. This will be the first time the planes will fly together.”

The Lancasters retired from active service in the UK in the 1950s, while the Canadian planes retired in 1965. Over 7,377 Lancasters were produced in the UK and Canada between 1941-1945; only 17 survive, and only two are airworthy.

Lancasters were based at airfields across the east of England during the Second World War and were used on bombing missions across Germany. Islanders will have seen them in the skies of Normandy during the allied invasions when they were used to blow up bridges, roads and railways to stop German reinforcements reaching the front line.

It is unlikely that the Air Show, on Thursday 11 September, will get any modern RAF planes this year due to work commitments. Mike said: “When the typhoons first came out we managed to show them in Jersey. The typhoons are working flat out at the moment and are training every day so there is no possibility of them attending any mid-week air shows.”

The Typhoons are operating in the Baltic along with aircraft from other Nato countries.

Deputy Higgins said: “Last year the RAF did send an AWAC and a C-17, and they only have six of each of theses.  This year we are hoping to have six planes which have never been to Jersey before, but plans can change. Last year we lost 10 aircraft just four days before the show. It can sometimes be like pulling rabbits out of a hat.”