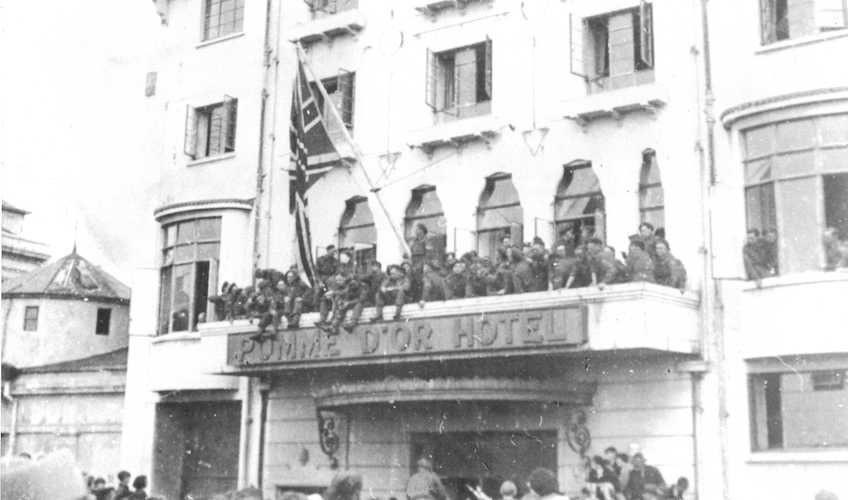 Jersey had endured five years of Occupation and the islanders were eager to see an end to the war. Liberation was only a few days away...

"In early 1945, the civilian food rations were down to subsistence levels and it was only the Red Cross food supplies keeping the population alive. Electricity and gas were rarely working, schools had been closed for seven weeks from Christmas Eve 1944 due to the cold. Most people’s shoes were worn out and their clothes had been darned and repaired.

By the beginning of May 1945, the population knew the end of the war was tauntingly close.

Hitler had committed suicide and Germany lay in ruins. Jersey had endured five years of occupation and the islanders were eager to see an end to the war. Liberation was only a few days away. Rumours about the end of the war had been circulating for days, but on Saturday 5 May 1945 they came to a head. 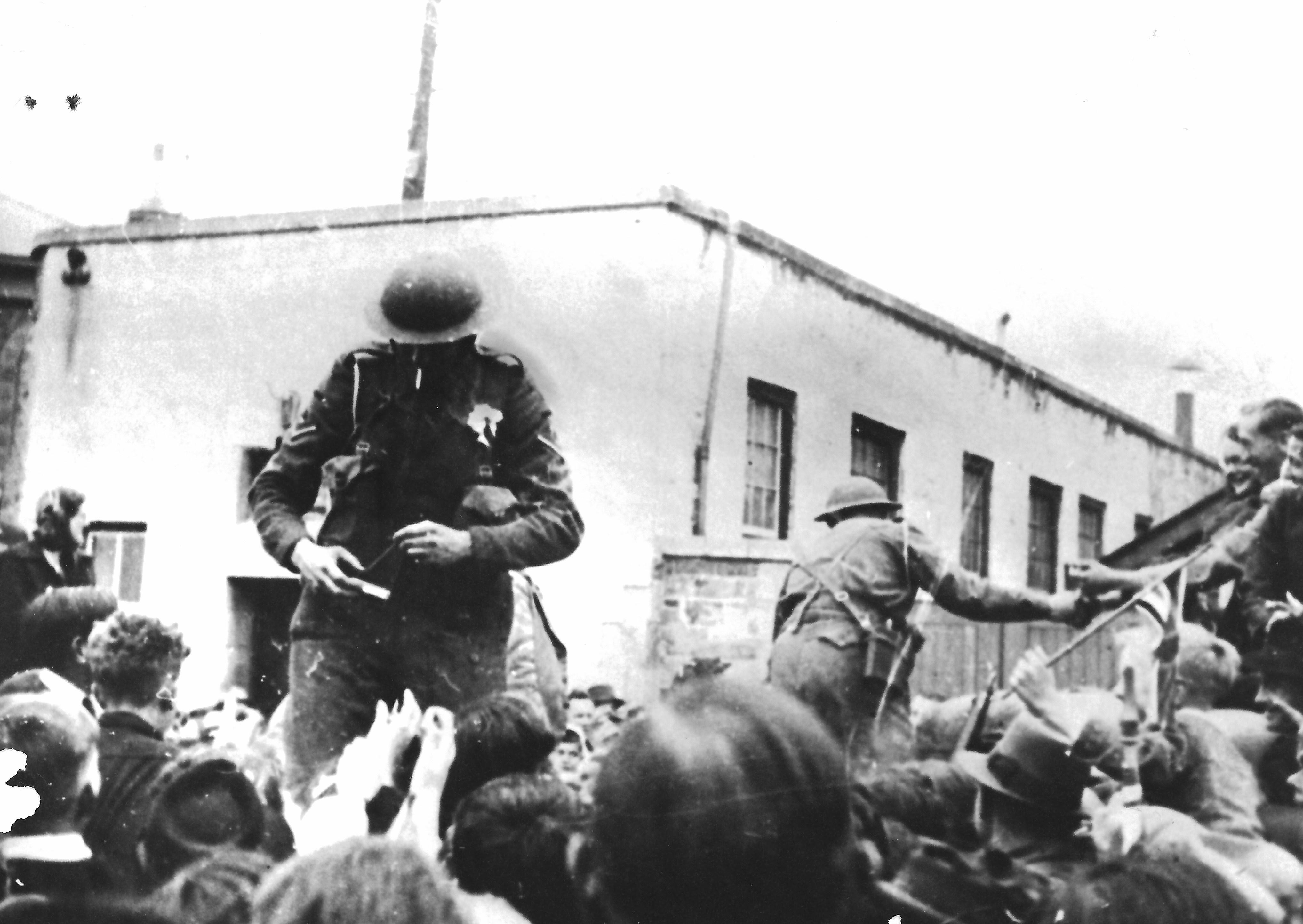 Suddenly, shops started selling Union Jack flags and bunting. Flags had started being hoisted in some parts of the island and many islanders began wearing patriotic red, white and blue brooches.

However, this had been a false rumour and it did not go unnoticed by the German authorities, who issued an order prohibiting the sale of any British flags until further notice, but it did not stop the population taking precautions, as no one wanted to be stuck with valueless money at the end of the war, so the banks suddenly found themselves busy with islanders wanting to cash in German marks.

On Sunday 6 May, the BBC World Radio Service announced the war in Europe would be over in a day or two and this had been picked up by those locals brave enough to have clandestine crystal sets. The news travelled rapidly around the island and for the first time since the evacuation in June 1940, people began to gather in large groups and openly talked about the end of the war.

Pictured: Islanders took to the streets to celebrate the end of occupation

With no petrol and few serviceable bicycles, people had to walk everywhere. The Summerland factory in Rouge Bouillon had been busy for the whole Occupation making and repairing shoes, these had wood soles and were not very comfortable. Therefore when new shoes were brought into the island by the Red Cross ship, the SS Vega on Monday 7 May, there were huge queues to acquire them.

VE day in Jersey started quietly, no news had circulated about the end of the war in Europe and although many people had painted their flagpoles in preparation for hoisting their Union Jack flags, the feeling was one of disappointment, however this feeling soon changed when the Bailiff, A.M. Coutanche, issued a message to the island which read:

“I appeal to you to maintain your calm and dignity in the hours which lie ahead and to refrain from all forms of demonstrations. It is my earnest wish that all services should be held in all places of worship in the same manner as services are being held in the United Kingdom and in other parts of the Empire.

"I feel that the conclusion of the Prime Minister’s speech this afternoon will be the appropriate moment for the hoisting of flags, and I make the strongest appeal to you, in the interests of public order, not to fly flags before that time. I was present last evening at the release from custody of the majority of the political prisoners, and I am doing all in my power to obtain the immediate release of the remainder of them. I shall make known to you immediately any further developments.”

Pictured: The Union Jack flag hoisted on the first floor balcony of the Pomme D’or Hotel

After the message was read, a huge crowd gathered at 15:00 in the Royal Square. Loudspeakers had been erected and the crowd listened intently to Churchill’s speech in which he declared, “...and our dear Channel Islands are also to be freed today."

After the speech, the Union Jack and the Jersey flag were hoisted over the Royal Court building. In other parts of the island, cars and motorcycles which had been hidden away suddenly appeared together with radios which should have been handed in to the authorities back in June 1942.

Many people remembered the street lights stayed on until late into the night ignoring any thoughts of the curfew.

The following day, Wednesday 9 May 1945 at 10:00, HMS Beagle appeared off Noirmont Point. At the same time, the Bailiff had been summoned to the German Field Command at College House to take a call from the British contingent requesting his presence along with the General commanding the German armed forces in Jersey on board the Beagle. They were collected by a Royal Navy launch and taken to HMS Beagle where General Wulf signed the official unconditional surrender of all armed forces in Jersey. A few hours earlier, Major General Heine had signed the surrender on-board HMS Bulldog in Guernsey. 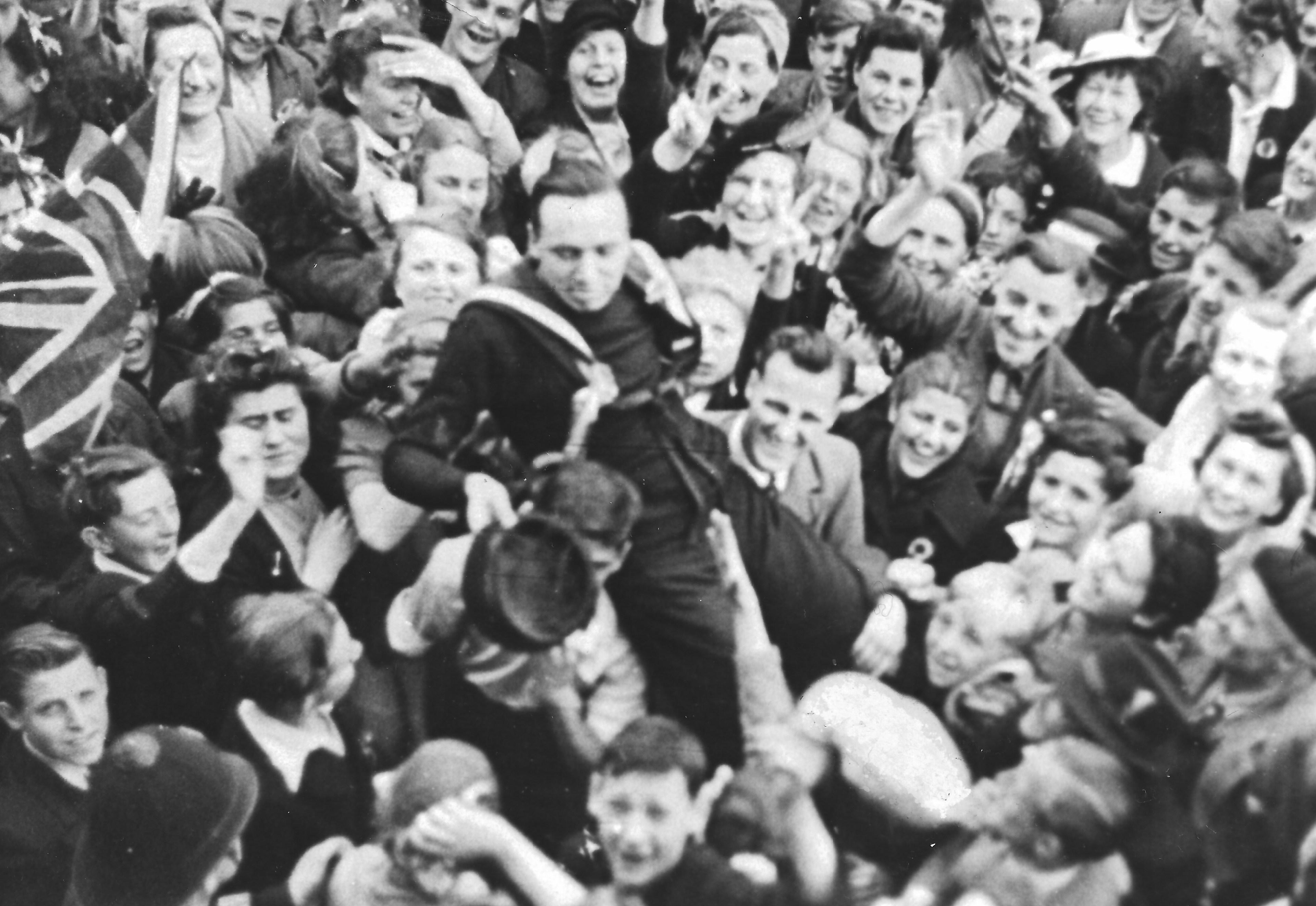 Whilst this was happening, a large crowd had gathered at the harbour and terminus building to see the first British troops arrive. A huge cheer went up when a British naval vessel was seen entering the harbour.

The first to arrive were Lieutenant Milne and Surgeon Macdonald who were medical staff and had come to access the wellbeing of the islanders. They had been driven to the end of the Albert Pier, but had to continue on foot because of the huge crowd. They were mobbed by islanders delighted to see the British servicemen.

They eventually entered the Harbour office where they hung a Union Jack flag from the first floor window, which was received by deafening cheers from the relieved and enthusiastic crowd below.

By early afternoon, formations of Royal Air Force planes flew low over the Island and more British troops had arrived. Colonel Robinson, the Officer in Command of the British forces in Jersey made the Pomme D’or Hotel his headquarters. He addressed the crowd from the first floor balcony, after which the Union Jack flag was hoisted to more euphoria.

After five long years of Occupation, the island had finally been liberated."