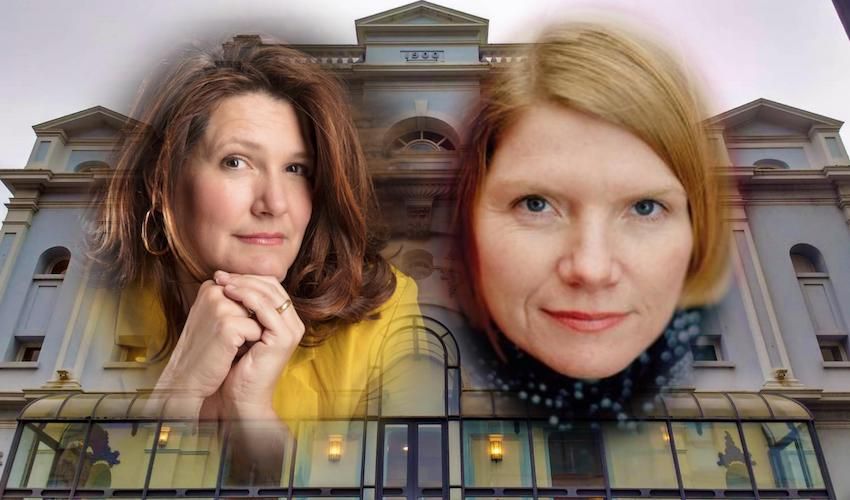 A celebrated jazz singer, who has always wanted to write, and a bestselling author keen to sing are going to be trying something completely new live on stage after a last minute cancellation at this year’s literary festival.

Replacing legendary journalist Sir Michael Parkinson, who was due to headline this year’s Festival of Words but cancelled due to a minor medical matter, is an evening which will put two acclaimed female creatives firmly out of their “comfort zone.”

Stepping into the breech is jazz and cabaret singer Kate Dimbleby and Sunday Times bestseller and Festival of Words patron Cathy Rentzenbrink, who are bringing their new show ‘Out of Our Comfort Zone’ to Jersey as part of next week’s festival.

Sir Michael was due to headline the fifth annual Festival of Words with an event called ‘An Evening with Sir Michael Parkinson.’ The evening was going to see the stalwart interviewer become the interviewee as he was set to face a grilling from his very own son Mike.

Pictured: The festival have found a replacement for Sir Michael Parkinson at the eleventh hour.

Following news that Sir Michael couldn’t attend, the festival have now announced that they have found a replacement in a new show by firm friends Kate and Cathy.

In their new show, the two masters of their respective fields are willing to become novices for just one evening as they swap disciplines – in front of a live audience.

As well as Kate giving writing a go and Cathy trying to get pitch perfect, the pair will also be sharing some words of wisdom they have gained over the course of their career about weathering life’s ups and downs.

The duo’s show, which takes place on 27 September at 20:00, explores what it means to find and own your voice, for themselves and everyone else.

Having released six albums and sold out the Royal Festival Hall in London, Kate is no stranger to performing, but this event will force her to ‘face the music’ in a completely different way as she conquers her fear of trying something she’s never done before.

Pictured: The festival kicks off next week.

Cathy first featured in the Festival of Words back in 2016 to discuss her memoir ‘The Last Act of Love’ and she will also be interviewing other guests at this year’s event including record-breaking sailor Sir Robin Knox-Johnston.

Organisers of the festival promise that the latest addition to this year’s line-up will be “an uplifting evening of songs and stories with lots of laughter and possibly a few tears!”

Chairman of the festival committee, Jennifer Bridge, commented: “We’re immensely grateful to Cathy and Kate for agreeing to bring their new show to the festival at such short notice. Both are masters of their crafts and we look forward to what promises to be an inspiring evening.”

The literary festival is on from 25 to 29 September and will include appearances from Jenny Eclair, Konnie Huq and Louise Minchin amongst others.