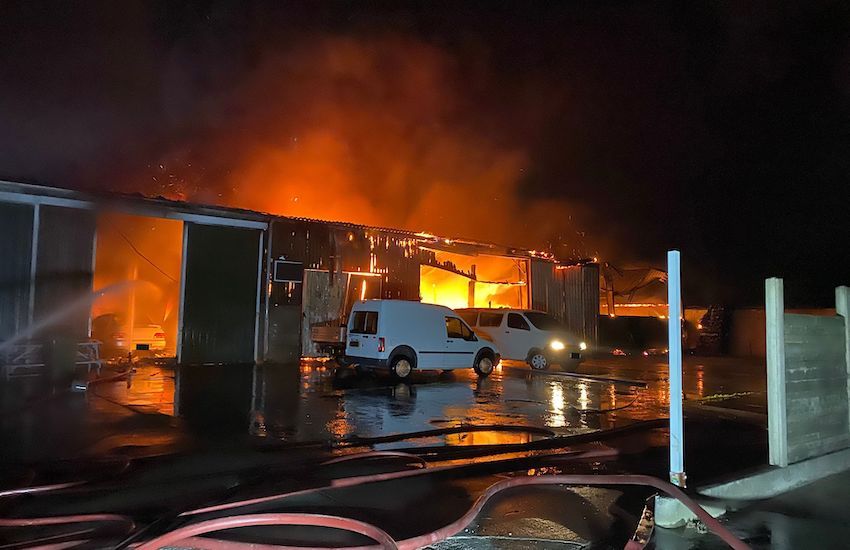 Farmers have been praised by the fire service for quickly rescuing their livestock, and helping to control a serious industrial fire that broke out late last night.

It happened on La Rue de Maupertuis in St Helier, just after half past ten.

It is believed no individual or livestock was injured.

The fire service received reports of a large fire that had broken out in a commercial unit on a private farm in St. Helier.

When the first crews arrived, they saw that blaze was quickly spreading to other commercial units, and called for more support. At the height of the fire, there were a total of 26 firefighters trying to get it under control.

Pictured: The fire broke out in the area of La Rue de Maupertuis around 22:37 on Wednesday night.

Firefighters struggled to contain the fire due to the challenges of the “unknown and mixed contents” of each unit and an insufficient water supply.

“The complexities of the unknown hazards that are common in such commercial premises present great danger for firefighters and nearby residents,” a statement from the fire service explained.

Luckily the landowners, who had quickly moved the livestock to another area of the farm before the crews arrived, assisted the firefighters, who not only praised their quick actions but also the vital information they provided.

The landowners informed the crews of the type and location of any potential hazards so that  firefighters could react quickly to remove several stored cylinders and flammable liquids.

Following the incident, Station Commander Ryan Hall said:  “Praise is well deserved for the quick actions moving the livestock to a place of safety, and information from on scene staff gave crews critical information on the hazards present so that we could react quickly to remove these and improve the safety of our crews working in these challenging conditions.”

The cause of the fire is currently under investigation.