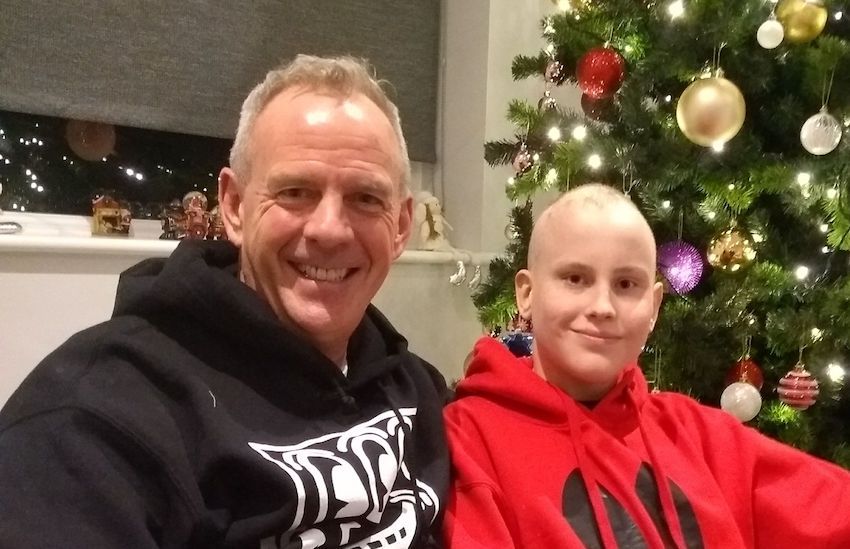 A 14-year-old aspiring DJ has returned to Jersey after spending 200 days in the children’s cancer ward at Southampton Hospital – during which time he met, one of his musical heroes, DJ Fatboy Slim.

Tom Clayton was diagnosed with stage 4 Non-Hodgkin Lymphoma – a type of cancer that affects the lymphatic system – in October 2019 and went to Piam Brown Ward at Southampton Hospital in early November with his mum, Peta.

The teenage boy spent 200 days in Southampton, where he received seven cycles of chemo, each lasting three weeks. In February, his scans started showing encouraging signs with no cancer activity appearing.

“The first PET CT scan [which enables doctors to track cancer activity in the body] he was lit up like a Christmas tree, it was all over the place,” Tom’s father, Tim, explained.

“The scan in March, it was night and day.”

Having been declared in remission, Tom was finally allowed to return to the island after 200 days in Southampton last Friday – although he will have to return to Southampton in three months to do more scans. 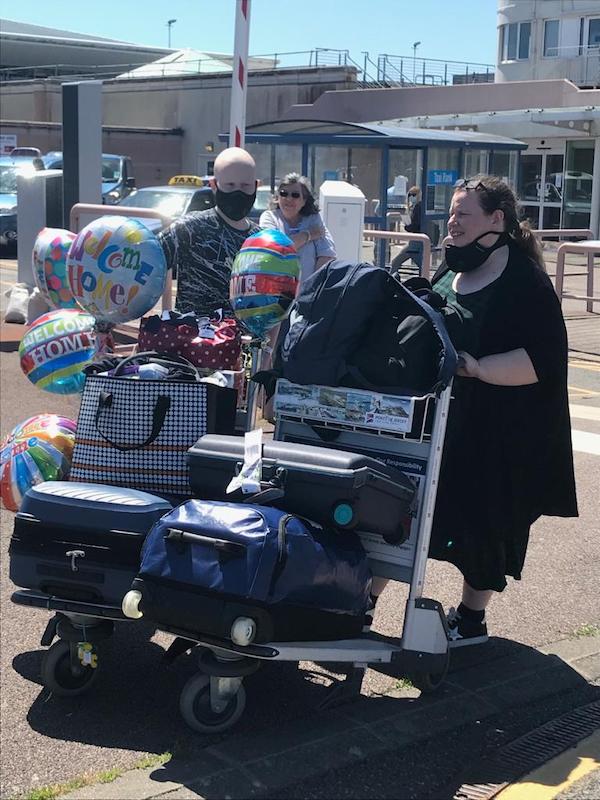 Pictured: Tom's family and friends came to the airport to welcome him back from a distance.

When he heard he would be able to come back to Jersey, Tom said ‘Thank god!” having missed playing with his younger brother, Alex, being in his house and being socially active.

A few family members and friends gathered at the airport on Friday to welcome Tom back to Jersey from a distance.

“There was like a party going on,” the teen said.

CLIC Sargent Jersey helped the finally find a place at Jean’s House, a home managed by CLIC Sargent UK where young patients and their families can stay while they receive cancer treatment at Southampton Hospital.

“It’s like a really nice Premier Inn,” Tim said. “You have your own room and there are communal rooms to cook and play.” 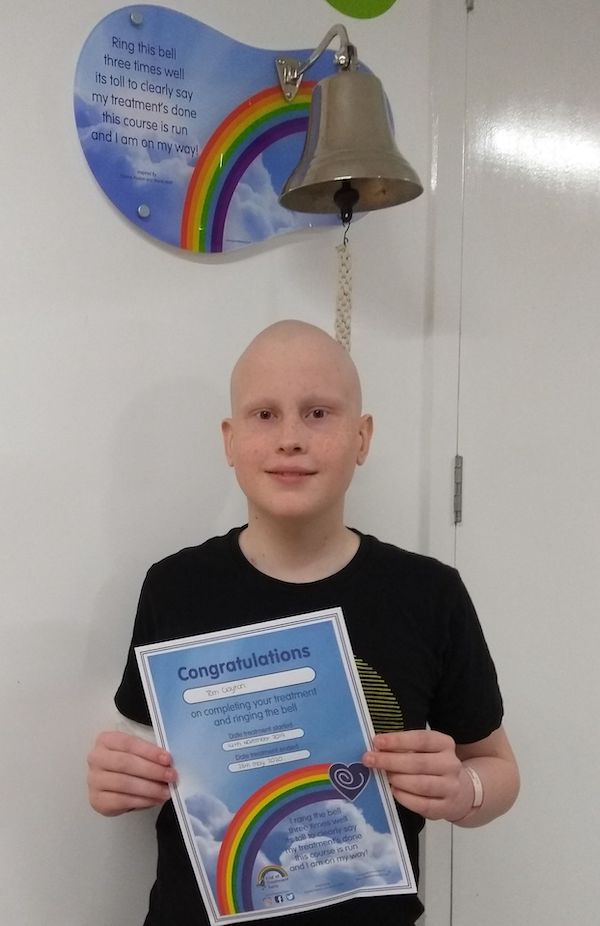 Pictured: Tom got to ring the bell signalling the end of his treatment before leaving Piam Brown ward.

“They were absolutely everything,” Tim said. “They pay a sum of money into your account every month and whatever you need or want, they will help.”

Due to Alex being only 10, Peta and Tim decided he would stay in Jersey to keep attending school. This meant that Peta stayed with Tom from November to January while Tim stayed with Alex in Jersey.

The couple then swapped over until the corona virus pandemic struck and Peta returned to Southampton to stay with Alex through lockdown. 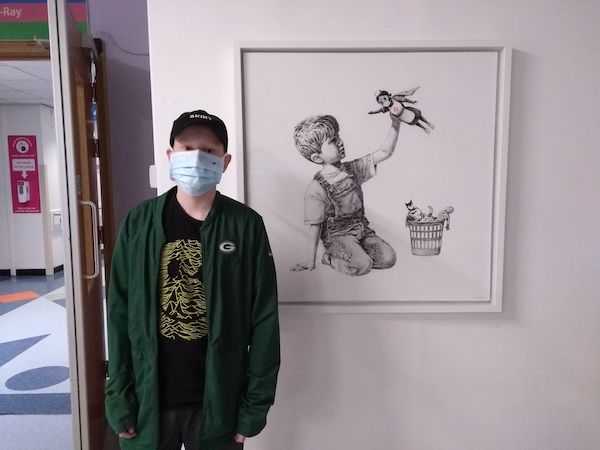 Pictured: Tom next to the artwork Banksy donated to Southampton Hospital.

Tim and Alex were able to visit Tom in Southampton for a weekend thanks to the Grace Crocker Foundation who funds bills for relatives. “When family comes along it makes his day,” Tim said.

Speaking of both charities, Tim said: “They gave us an amazing amount of support they were so helpful. They deserve all the money they can get.”

They also thanked Jersey Hospital’s Travel office who helped find an apartment for Peta and Tom to stay in when Jean’s House had to close due to the pandemic.

“They were absolutely amazing,” they said. “The support we got was overwhelmingly good.” 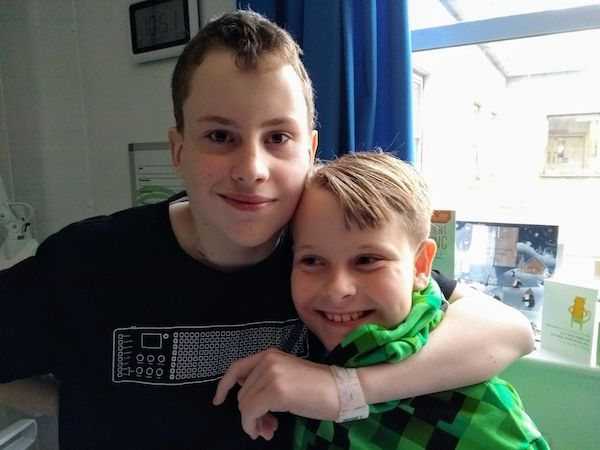 But the family also thanked DJs who have shown their support to Tom, an aspiring DJ himself, sending him playlists like Bristol-based duo Cousn.

Renowned DJ Fatboy Slim even visited the teenage boy at the hospital, ahead of his Boxing Day gig in Southampton after Peta contacted his agent.

“They were so many people like that,” Tim said.

Due to the family having to stay in quarantine for two weeks and with Tom having to shield for a few months still, the young boy hasn’t had the chance to see his friends and talk about the encounter yet. 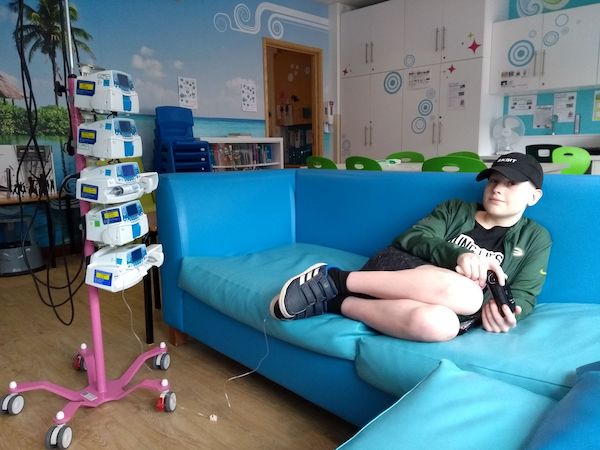 Pictured: Tom is looking forward to seeing his friends again after over seven months away from them.

But he has enjoyed returning home and finding a “mountain” of gifts from his birthday and Christmas in his bedroom.

He is however looking forward to hopefully returning to school in September and to travelling with family to Japan, London and France next year.

“We have had a few bumps in the road,” Tim said, referring to Tom’s treatment. “Now we are on the other side of this, we can enjoy the non-bumps.”