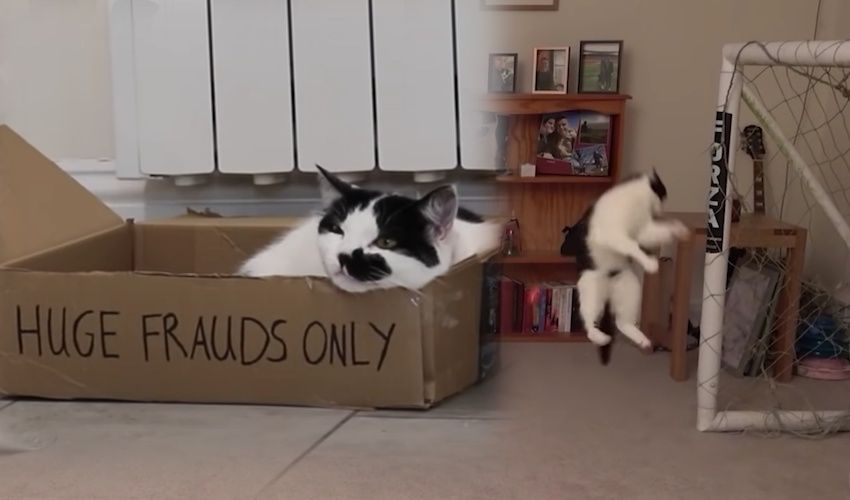 A Jersey vlogger determined to prove how easy it is to fake posts online, has gone behind the scenes of a spoof video of his cat’s apparent goalkeeping skills, which went viral and was even picked up by Good Morning, America and James Corden.

Chris Dixon, posting on his popular YouTube account, ChrisMD, has come clean that his 'feline on the goal line' – internet sensation Smudge – was only made to look as though he was saving shots by a production team, when really, he was just playing with one of his favourite toys.

Viewers around the world, however, had already been convinced that Smudge was the new Iker Cat-sillas and the clip was even picked up by global news programmes and ‘The Late, Late Show with James Corden’.

Chris made this video as part of a week-long challenge to post fake videos and photos on his Instagram to see if anyone noticed. His other posts included a photoshopped picture of him dead-lifting his girlfriend, Shannon Langdon, and a doctored video, made to look like he smashed Shannon’s car window with a football trick shot gone wrong.

Video: Chris shows his followers how he pulled off the series of spoof posts (YouTube/ChrisMD).

He said that he wanted to make a point about how artificial so much of the content on the social media platform is. In a new video showing how he pulled off the internet stunts, Chris goes behind the scenes to show how much time and effort goes into manipulating reality online.

Speaking about why he wanted to do this challenge, Chris explained his motivations: “The reason I’m doing this is to show you the type of process that some celebrities and influencers definitely go through every time they upload a photo, and how unrealistic the photos they do upload are as a depiction of their bodies or lives.

“I’m not saying that everyone photoshops their photos, but everyone edits their photos to some degree; whether it’s lighting or texture to make themselves look better. Taking 300 photos per pose so that you can select the one that makes you look most unlike your actual self as possible is almost just as bad as photoshop.”

He stressed that whenever a network or account got in touch with him to use the cat goalkeeper video, he informed them that it was fake.

Video: The clip was picked up by James Corden's TV show in America (YouTube/The Late Late Show with James Corden).

Amused by the reaction it received and proud of how it turned out, Chris joked: “This is the best thing I’ve ever made, let alone for this video. I think ever.”

He also said that the clip completely surpassed his expectations, as it did the rounds in France, New Zealand, the Netherlands, the UK and America.

He even got approached by BBC News to be interviewed about Smudge’s cat-like skills in goal, but of this he said: “Politely declined that. [I] didn’t think ‘lol, jk, lads, it was fake’ would go down brilliantly live on BBC News.”

At the end of the behind-the-scenes video, Chris suggested that his pet is now the breadwinner of the family: “I think that is the only thing of mine that has ever gone viral. So, well done, Smudge, for putting a roof over our heads!"

Pictured (top): Smudge the cat who has become an Internet sensation over his (doctored) goalkeeping skills (YouTube/ChrisMD).

Posted by Scott Mills on Jun 1st, 2020
just shows the virtual world is exactly that....fake.....think about that when you spend all your life scrolling your screen and watching all the other similar stuff on the anti-social media
To place a comment please login Login »

Muratti off for another year