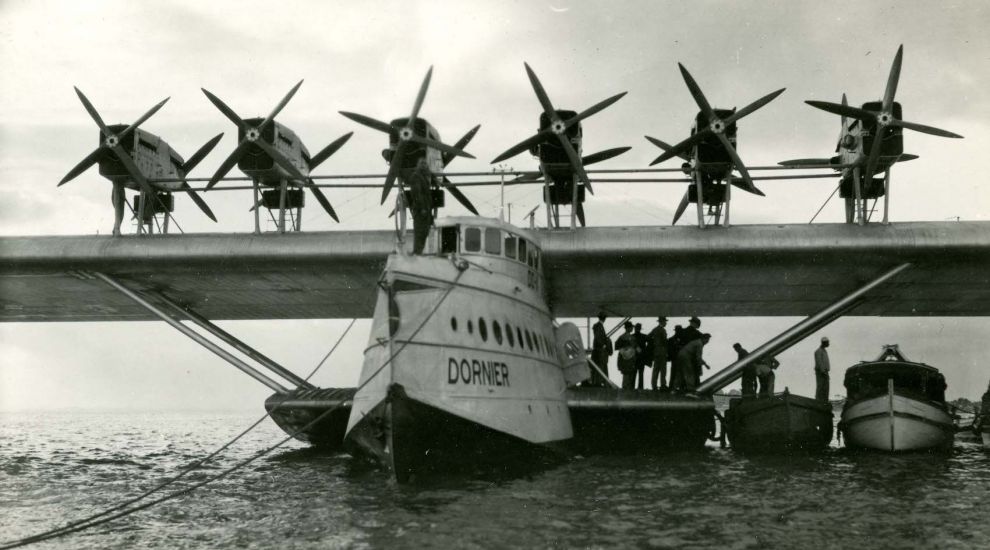 When a Jersey couple living in Brazil went to catch a glimpse of the world’s largest flying boat in 1931, they were shocked to discover that its captain was the same man who had shot down their friend during the First World War.

The Dornier Do X was a giant flying boat built in 1929 as the last word in luxury air travel.

It is described as having had “yacht amenities”, including a dining salon and smoking lounge, and typewriters provided in passenger cabins.

With 12 engines, it was the world’s largest, heaviest and most powerful aeroplane when it was built. 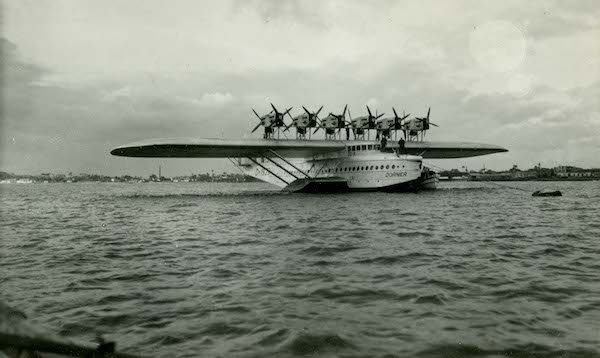 It was piloted by Friedrich Christiansen, who had been chosen by the Claude Dornier Company for the plane’s maiden transatlantic voyage from Germany to New York, which began in November 1930.

Christiansen was a highly decorated German flying ace and is credited with shooting down 13 planes during the Great War - though Christiansen himself claimed 20 victories.

It was while the Do X was in Brazil in August 1931 that islanders Ken and Kathleen Le Sueur, who had moved to Brazil after getting married in Jersey, went to see it.

Ken, a keen photographer, took at least two pictures of the aircraft, copies of which Kathleen sent to Nell Mossop, a cousin of hers, in December 1931.

A year later, on 22 December 1932, Kathleen received an apologetic late reply from Nell, thanking Kathleen “for the very good snaps” and writing: “Edward, especially, was very interested in pictures of the Do X. I think you knew that the Captain was the man who shot Edward down in the North Sea during the war.” 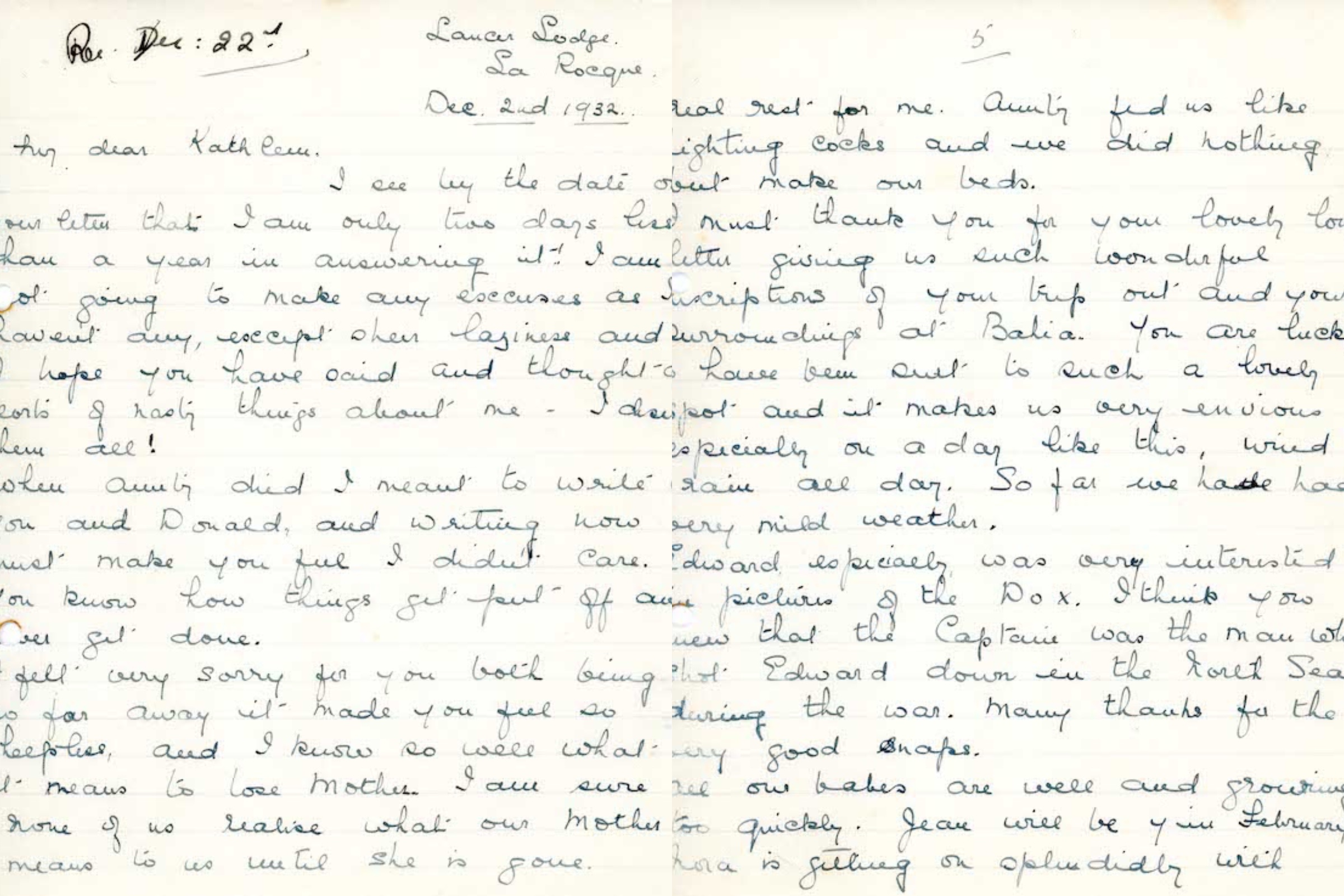 CLICK TO ENLARGE: The letter from Nell Mossop to her cousin, Kathleen Le Sueur. (Jersey Heritage)

Edward Mossop, Nell’s husband, had served in the RAF during the First World War. On 31 July 1918, he and his crew were conducting a routine patrol off Lowestoft when they were attacked by five German seaplanes, forcing them to land in the North Sea.

Two of the crew died, but Edward and two others miraculously survived, despite coming under further fire once in the water. The pilot responsible for the attack was none other than Friedrich Christiansen. In fact, it is the last victory for which Christiansen is officially credited.

Tragically, on 13 August 1918, Edward’s younger brother, Stanley, who also served in the RAF, died near Cherbourg when his seaplane crashed after the tail plane collapsed.

Just three days earlier, Stanley had become the first Jerseyman to land a plane in Jersey. He had been making a flying visit to see his parents and his brother, Edward, who was on leave in the Island having been shot down by Christiansen less than two weeks earlier.

After the Nazis assumed power in 1933, Christiansen’s distinguished and decorated career led to appointments in the Reich Aviation Ministry and National Socialist Flyers Corps. In 1939, he was promoted to the rank of General der Flieger, a General of the branch rank of the Luftwaffe.

From May 1940 to April 1945, Christiansen held the position of the Supreme Commander of the Wehrmacht in the occupied Netherlands. In August 1948, he was found guilty of war crimes and sentenced to 12 years’ imprisonment in Arnhem. 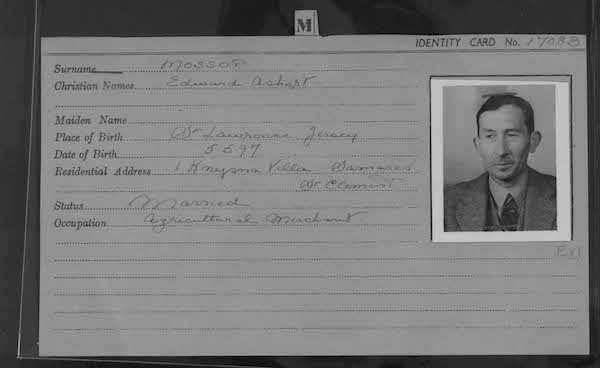 Christiansen was released in 1951 on the grounds of ill-health, living another 20 years before his death in 1972. His one-time adversary, Edward Mossop, died a year earlier.

The Le Sueurs, who took and sent the pictures to the Mossops, moved to Bahia in northeast Brazil shortly after their wedding at St. Brelade’s Church in April 1931. They later lived in Barbados, Mexico City and London, before returning to Jersey in retirement in 1969.

They had actually got engaged in September 1927, but, shortly after, Ken took up a post with the Western Telegraph Company in Buenos Aires for three months, before relocating to São Vicente, one of the Cape Verde islands.

Kathleen, on the other hand, worked as a music teacher in schools in the southwest of England, and spent her school holidays back home with her family at Vale Farm, St. Peter. 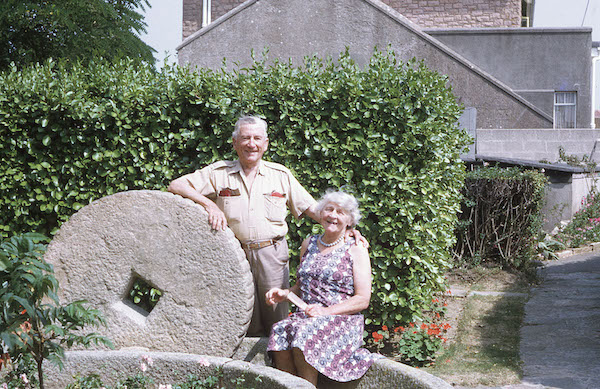 It would be three years after their engagement before they saw each other again, communicating primarily by letter throughout.

Many of these letters, in addition to Ken’s extensive photograph collection – including the shots of the Dornier Do X – are held at Jersey Archive.