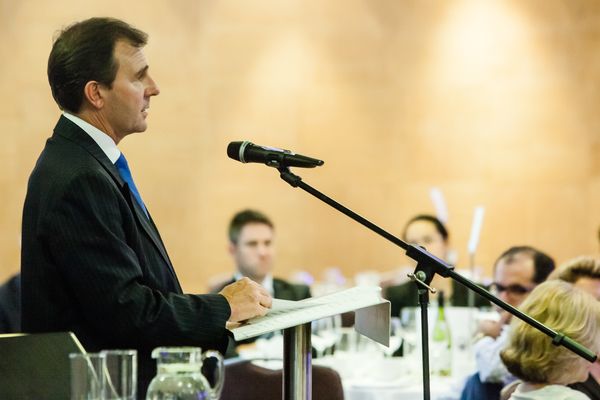 The minister who has come bottom of an online survey of favourability ratings says that he and his colleagues are paying the price for taking difficult decisions and failing to get their message across.

Treasury Minister Alan Maclean scored the lowest approval rating of any of the 16 politicians included in the online poll by independent political campaign group change.je, with a -62.71% rating. He was closely followed by Senator Philip Ozouf (-62.48%), Infrastructure Minister Eddie Noel (-49.48%) and Health Minister Andrew Green (-49.2%).

Responding to the results, Senator Maclean said that the ratings were unsurprising, considering that he and his colleagues had to deal with a £145 million potential deficit in States finances. That "black hole" has led to redundancies, a public sector pay freeze cuts to services, and £55 million worth of new taxes for health and sewage.

The Senator - who came fourth in the October 2014 Senatorial election with 11,698 votes - said that the difficult decisions that ministers had taken over the last year would lay the groundwork for sustainable public finances for years to come. He also said that while they could have massaged the figures and pretended that there wasn't a problem, but that the responsible thing to do was front up to the scale of the issues and be honest about them.

Senator Maclean said: "The survey result is really not a surprise as it would be rare for a Finance Minister to be very popular and especially in an environment where he is faced with having to find a solution to a funding shortfall of £145m within a few weeks of taking office.

"The Council of Ministers could have approached the problem in a number of different ways. We could have taken the easy option, massaged the figures, borrowed some money, spent more of our reserves and said we'd close the remaining gap as the economy grew in the future and thus effectively passing a much bigger problem to future generations.

"We decided to be absolutely open about the challenges we faced and set about developing a Medium Term Financial Plan to deal with them and deliver a balanced budget by 2019. A plan to set the foundations for strong public finances for future generations. It was clear to us that the Island could not afford to continue as it was and that the level of change necessary to modernise the public sector and put public finances on a strong long term footing would be difficult and in places very unpopular.

"I am obviously disappointed to be bottom of this poll and think my rating and that of the Council of Ministers also reflects the fact that we haven't managed to explain as effectively as we could have exactly what we are doing and why? We need to find ways to improve our communications and level of engagement with the community so we can take them with us on this difficult but necessary journey."

Posted by Gregg Kelly on Mar 1st, 2016
Fully agree that you are not getting your message across - whose fault is that?? Also, perhaps you are making the wrong decisions in the eyes of the public.... The Waterfront Finance Centre....?
Posted by Tim South on Mar 1st, 2016
Instead they are speculating in with tax payers money and the islands assets ( land and car park ) by building unneeded office blocks have borrowed £250 for housing and been honest about the black hole which a month before the election stood at a mere £30 million but six months after amazingly was over £100 million. Maybe we should ask the ex treasurer why she resigned five days before the accounts for Jersey were signed off ?
Posted by david forde on Mar 1st, 2016
Not to mention being dishonest, entering a business they have NO business being in, and lied to the public! Then treating the public like morons!
Posted by Stewart Pearce on Mar 1st, 2016
You are paying the price for BAD MANAGEMENT end of story, if we ran a Company like the States run Jersey we would have been sacked long ago. Start by introducing a tax on the beloved Banks you so dearly treasure.
Posted by Gary Picot on Mar 1st, 2016
There are rich people that have come to live here years ago, "negotiated thier future taxes" and now pay a hell of a lot less than most locals pay.
if you want to get back in our good books, reduce our taxes and make the people who come here to live pay for the benefit.
And try listening for a change
Posted by Gary le blond on Mar 1st, 2016
There is NO 145m black hole, its only you wanting to spend that is making it, with the Finance Centre, cycle track through st peters which bikes wont use like Gorey because of surface fit only for mountain bikes, stop spending our money to the point where we have to borrow and cut you cloth to suit your means ie not by job cuts but by your stupid spending. Also you should get you Chief Officers to stop taking the P with flights and so on I wonder if they the only Two guilty? and believe me they knew what they were doing.
Posted by Anthony Johnson on Mar 1st, 2016
Time for the States to see the light. Its not the workers its the top heavy management. To many chiefs and the right amount of Indians. The cost of losing one over payed manager the price of three Indians. Manager sat behind desk for 8 hour shuffling paper then 2 more manager above him shuffling paper the the over manager doing sweet FA because he got 3 or 4 managers to do his job. Well it time for the manager at the top to start doing his job that he's over paid to do, instead of getting a shiny ass on his suit pants
Posted by space invader on Mar 2nd, 2016
Two civil servants on six figure salaries taking the mickey on flights and no one is held accountable.Two million just to look for a site for a hospital that they don't even know how big it needs to be,a minister who spends half the week in London, JCG sold for £1 million,speculating on a finance center the list goes on.The chief minister is a weak spineless puppet who doesn't have the balls to hold people to account.Wake up Gorst they are taking the piss.Grow some balls and put the island back on track - unless you are totally corrupt or incompetent and if so then just resign
Posted by Bo In Jersey on Mar 2nd, 2016
You can't get away from the fact he was an estate agent. And then the public go and vote in two DJ's. You couldn't make it up.
To place a comment please login Login »