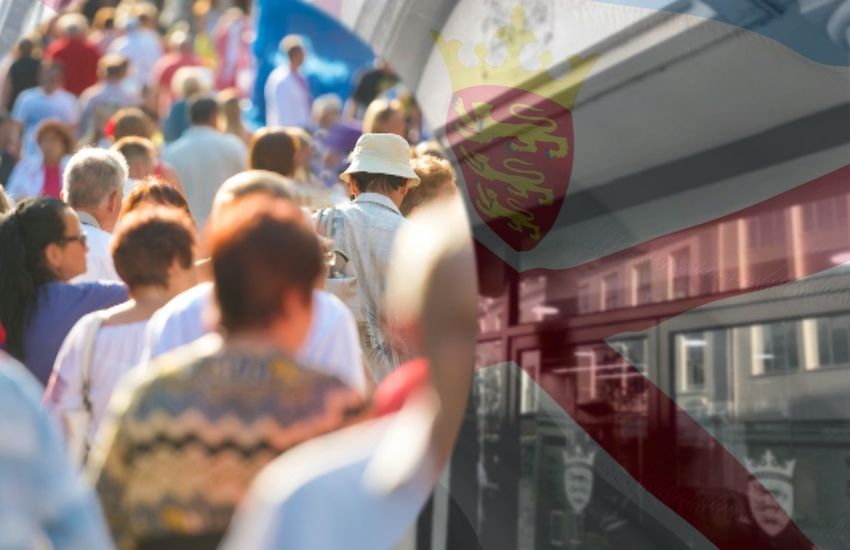 Ministers have published plans to replace the current system controlling who can live and work in Jersey - but there's still no policy setting out exactly what the island wants to achieve.

The new Migration Policy provides for nine month, four year, 10 year and long term permissions, removes the ability for a business to 'recycle' a permission between employees, and tightens up the criminal record checks. But Ministers say it is NOT a population policy, setting out what the island actually wants - it simply gives the island better tools to deliver that, once it is decided - which won't be until 2022.

In announcing the new proposals, the Chief Minister was also critical of the existing migration system, admitting it simply isn't capable of actually controlling the number of people in Jersey.

If agreed by the island's politicians, the new plan replaces the current system of Entitled, Entitled for work, Registered and Licensed permissions for those who want to work in the island.

Jersey has seen its population grow by more than 20% since 2001, with the vast majority of jobs being available within the 'local' labour market, with no restrictions on the numbers of staff employed. 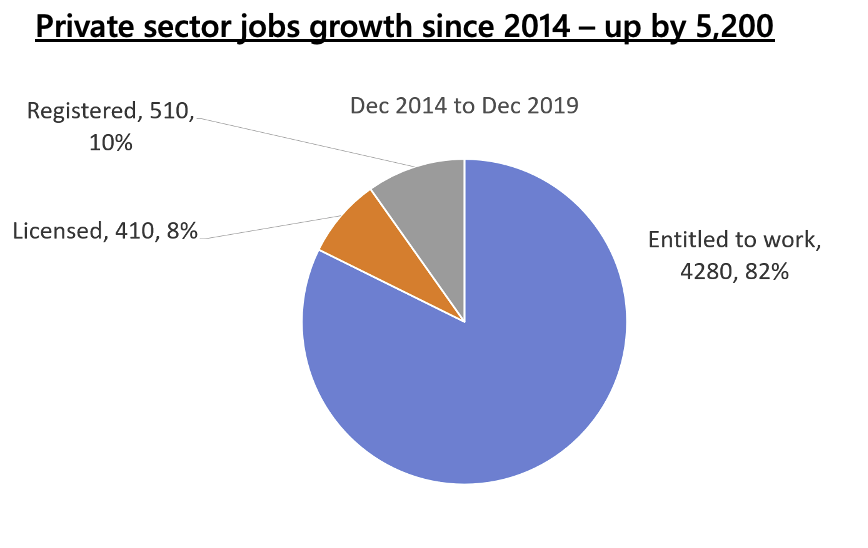 Pictured: most jobs have been created for 'local' workers.

The official population number now stands at more than 107,000. Ministers say the main reason for that growth has been that permissions can be 'recycled' and passed from one employee to the next:

"The main driver of the recent growth in Jersey’s population has been the automatic ‘graduation’ of migrant workers who arrive in the island to take up registered employment and who, when they become Entitled To Work (ETW) after five years, can move into the wider job market – freeing up registered employment permissions that employers use again for new inward migrants.

"This allows one registered permission to be used repeatedly by the employer allowing more than one migrant to take advantage of the permission at different times. This means that the total number of workers in the Island continues to increase even if no new registered permissions are granted to businesses." 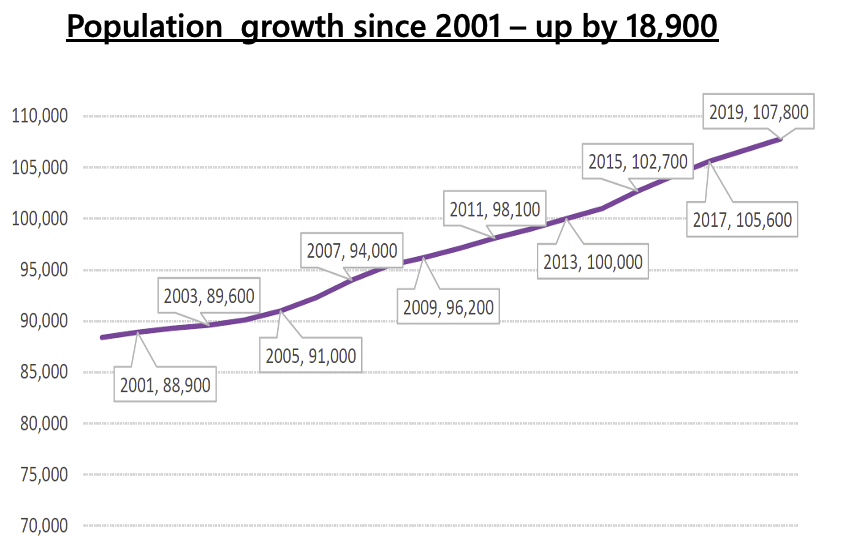 Pictured: Jersey's population has grown by 20% in the last 20 years.

The final report of the Migration Policy Development Board under the St John Constable Chris Taylor, was published in March, to the frustration of politicians tasked with reviewing it, who wanted a clearer vision for the future population policy.

The new policy is based on that report, and is intended to provide "more responsive" migration controls to manage population growth, as well as a "more transparent" applications and approval process, better data collection and analysis and make sure Jersey is an "attractive and fair" place to come to work.

It also tightens up the criminal record checks for new residents and allows housing or work permissions to be removed, if someone commits a serious offence while in Jersey. 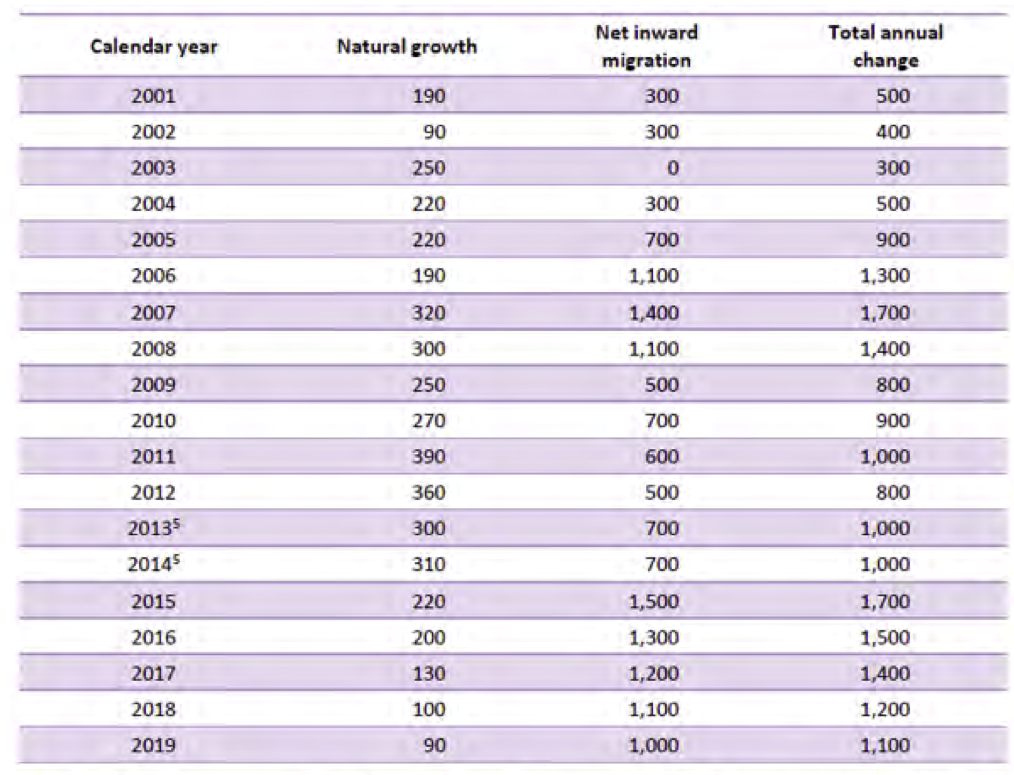 The nine month permission is primarily aimed at seasonal workers, and can be renewed repeatedly, as long as the worker leaves the island for at least three months - it does not lead to permanent residential status.

There is also a four year permission, which can be extended (following an application) to 10 years, and then permanent status, if the worker's skills, job responsibility and salary develops.

Finally there is also a 10 year permission, which on application, can lead to permanent residential status.

But today's Migration Policy is not a Population Policy, and is designed only to provide the tools necessary to implement one, once it has been produced, which won't be until 2022.

"The proposed migration controls are sufficiently robust to restrict the net inward migration rate where required to do so, but also offer the flexibility to allow targeted migration as may be required for our future needs. 2021 will bring fresh challenges.

"The economy has contracted during 2020 and during the time we will be encouraging and supporting economic recovery there will also, therefore, be time to design and implement these proposed legal and administrative changes to create a new system that is fit for the future.

"This policy paper does not attempt to set a population target. This will require wider public and political debate on how the island wants to move forward in our post Brexit and Covid-19 world."

In the media briefing this afternoon, the Chief Minister accepted that the existing system was incapable of controlling population numbers, which was why successive governments had set targets for the number of people in Jersey, only to see them repeatedly smashed. He argued the new Migration Policy gave his government the tools to have that control.

He also warned that the number of people working in Jersey had actually fallen this year:

"Initial estimates suggest that the number of workers in Jersey has fallen by several thousand between summer 2019 and summer 2020. It is likely that migration is likely to continue to be depressed during 2021 due to both Covid and Brexit."

The new Migration Policy does not affect what are known as 2 (1) (e) applications from high-net-worth residents.

Posted by Private Individual on Oct 21st, 2020
Another non policy. This will do nothing to stop the flow of migration into the island.
Posted by IanSmith97 on Oct 21st, 2020
It does not take a genius to work out why the population exploded. The geniuses who agreed the EU treaty terms when the U.K. joined the EU agreed that EU residents had the right to establishment in Jersey whilst Jersey people with 4 local grandparents were barred from establishment in the EU. Consequently many thousands who used to come on 9 month work permits for tourism and agriculture simply stayed after their countries joined the EU. I am not blaming those people who did a great job, after all, who wouldn’t want to live here but the unequal treaty terms caused a population explosion.
Posted by David Moon on Oct 21st, 2020
The problem is not the EU workers coming into the Island but uncontrolled immigration from the UK. The only way is to restrict the right to purchase or rent property as under the 1949 Housing Law. With the vast amounts of money which has been invested in education the Island should be able to fill all jobs from local residents instead of recruiting from the UK. A restraint on development would reduce the demand for workers from outside the Island for the construction industry as would an improvement in terms and conditions in agriculture. The education system focusing on vocational and technological rather than on university aspirations would also assist.
To place a comment please login Login »