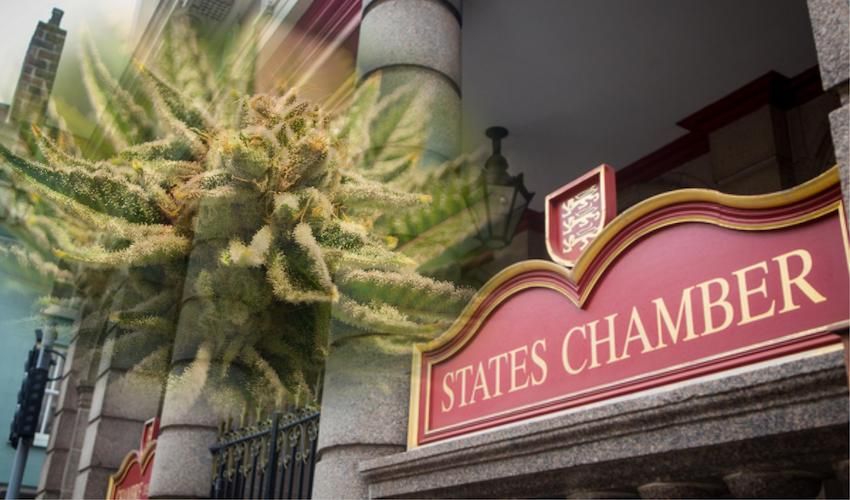 The Health Minister has defended doctors who are hesitant about prescribing medicinal cannabis for pain relief amid claims that their actions are having a "morale-sapping" effect on islanders in need.

Responding to a questioning over whether he would encourage a more “positive” and “proactive” approach towards prescribing medicinal cannabis, the Minister, Deputy Richard Renouf, explained that local doctors want to learn more about how the drug works, and for the moment “are seeking advice” from their professional regulatory bodies.

Deputy Rowland Huelin asked the Health Minister about the issue during yesterday’s States Assembly sitting after Jersey’s leading pain Consultant, Dr Chad Taylor said publicly that he was "duty-bound" not to prescribe medicinal cannabis following the States' "watershed" decision to allow Jersey doctors to do so.

Pictured: Health Minister Deputy Richard Renouf was quizzed in the States about the scepticism of some medical practitioners to prescribing medicinal cannabis.

Deputy Huelin described these comments as having a “morale-sapping effect on those people who would like the opportunity to try” medicinal cannabis and who "believe it will have a life-changing effect" on their health conditions. In light of this, the Deputy asked whether the Minister would “try and encourage the pain consultant to take a positive and pro-active view of his research into medicinal cannabis."

In response, Deputy Renouf said: “We must take care about making this personal. The consultants in question are seeking advice from their professional bodies… and at the moment that advice is that the use of cannabis for chronic pain is not proven, though there is good advice for other uses.”

The Health Minister added that local clinicians are “very willing” to get involved in clinical trials to further test the uses of medicinal cannabis, but for now “cannabis is not a certain solution for chronic pain” and medical professionals have to “rely on solid clinical trials."

Pictured: Jersey's leading pain specialist's comments that he is "duty-bound" not to prescribe medicinal cannabis were described as "morale sapping" in the States Assembly yesterday.

Dr Taylor previously said to Express that the Pain Clinic are "very interested" in researching the medicinal potential of the drug.

He said: "I’ve said to the Minister that the Pain Clinic would be very interested in getting involved with independent research linked in with our GP colleagues and we have the opportunity to do this now because GPs and specialists can prescribe it... I’d be very keen to get involved with research to try and find the best way forward to prove whether these products do work or don’t work, what the harm is – we need to know all these things before we would be happy to prescribe the medication."

Elsewhere during his question time, Deputy Renouf was asked about the lack of staff consultation on the Future Hospital project, the future of mental health services and post-natal support for new parents.

Posted by William Boyd on Dec 4th, 2018
Whilst I have no objection to cannabis being properly prescribed for those in serious pain (and in a format dope-heads can't use for kicks) I cannot help but think that this is being used by some as a back door to general cannabis availability. It is usually always the same, make a good but emotional case for something and before we know it the whole original purpose has been lost and there is a free for all. You see it on the telly with ne-er do wells who have 'cannabis licences' in some licensing U.S. states who are obviously taking the Mickey. Before I get slaughtered just read the first sentence of this post. We licence morphine so I do not have a problem with medicinal cannabis, just the Mickey takers and those trying to have a cannabis fre-for-all (so we can save agriculture apparently). Be very, very careful what you wish for.
To place a comment please login Login »