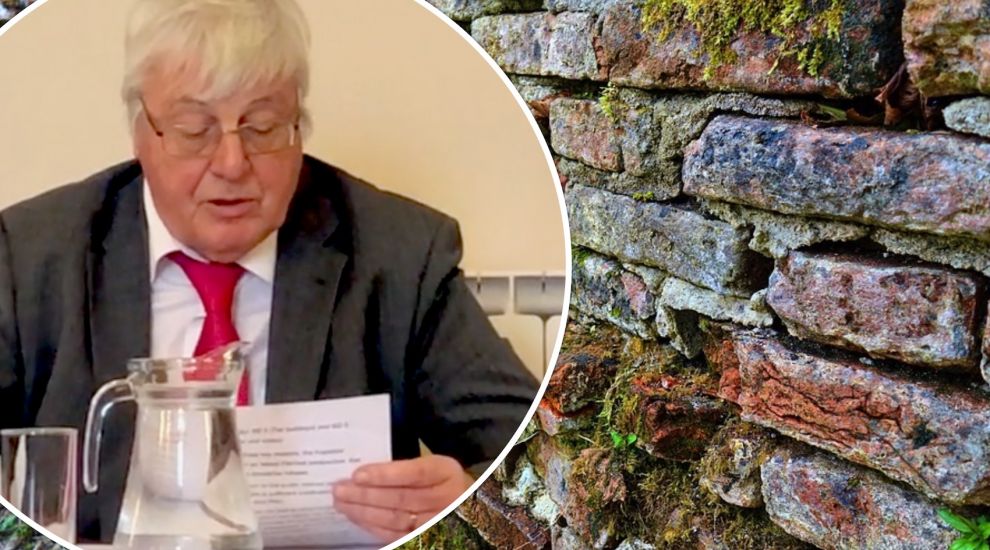 The Environment Minister has ruled against the reconstruction of a Trinity farmhouse and outbuilding, which fell into ruin after the Occupation after the family owners was forced to leave.

The Planning Committee had previously granted the permission for the plans at Egypte Farm on La Rue d’Egypte, but it was overturned following an appeal, with Deputy John Young judging that the plans would constitute creating a 'new' building because the existing ones had been abandoned for too long.

The plans included the reconstruction of a farmhouse to form a three-bedroom home and one of outbuilding to create a garage and store.

At the time of their decision, the Committee said it was based on “genuinely exceptional circumstances relating to the wartime occupation”.

They also considered the residential use had not been abandoned “by virtue of the planning history of the site; links the applicants have maintained with the island through the continuation of rates payments and by maintaining ownership for such a long period of time”.

Pictured: The home is located in Trinity.

Planning Inspector Roy Foster was tasked with submitting a report to the Environment Minister, Deputy John Young, who sought to establish whether the residential use had been abandoned as well as an ecological assessment.

In his report, he described the farmhouse, which has been owned by the same family since 1943, as “the ruinous shell of the original dwelling now in very poor structural condition”.

He also noted that the house had not been lived in or used in any other way since July 1943 due to “sudden forced vacation”, and described the circumstances as “certainly unique”.

Previous reports noted the department had accepted the original building had become a ruin “as a result of the actions of the occupying forces during the war”.

Mr Foster explained how the family who owns the property was unable to reconstruct the home after 1949 due to a lack of “sufficient compensation and funds”. Later on in 1961, the plans were further “frustrated” by the imposition of South African exchange controls.

However, the family made enquiries to the Planning Department about the potential reconstruction in 1984, 1998, 2005 and 2006, even though the Department always considered the buildings abandoned. Two formal applications were made in 2006 and 2014 and both were refused.

He noted that while there had been a gap of 35 years between the 1949 estimate for reconstruction and the first of the written enquiries, the latter had started 10 years before the relaxation of exchange controls.

He added that there was no evidence that the owners had abandoned all intention to rebuild the home between 1949 and 1984.

He concluded the residential use had not been abandoned and that conditions could be imposed to ensure a “package of ecological enhancement and mitigation measures” as recommended by a full ecological assessment.

The Minister however overturned the decision because Egypte Farm had not been in residential use for over 75 years, “with no interim use or clearly proven intention to re-use the site for residential purposes within that time”.

“In reaching this conclusion, the Minister further notes that the farm buildings have been in a ruinous state for a substantial period of time and that the vestiges of structures remaining do not reasonably constitute a dwelling house,” his Ministerial decision noted.

Due to the home having been abandoned, he said allowing the proposals would represent the erection of a new dwelling house within the Coastal National Park, which goes against the Island Plan Policies.

He also said there was not enough evidence to show the proposals would “secure the conservation and enhancement of the natural beauty, wildlife and cultural heritage of the Coastal National Park”.

He therefore allowed the appeal and refused to grant planning permission.

Posted by John Sheen on Nov 7th, 2021
Ridiculous. Buildings get old and need replacing. It’s as if the planning department believe nothing should ever be modernized or developed. If the human race hadn’t been doing that for thousands of years, we’d all still be living in caves - perhaps that’s what planning officers would prefer, as if you take that view, every single building on this rock is not original and has ruined the character of the original jersey.
Or could it be that the human race’s needs have changed, and so the buildings must evolve with them? Hmmmmm. I wonder.
Posted by Private Individual on Nov 8th, 2021
So let me get this right, the family was forced to flee an area of war so we're in fact refugees in the 2nd world war being forced from their country by an occupying force. They then return after the conflict ends but have no money due to circumstances beyond their control.

After such a traumatic event it takes decades to recover from it and for normality to return. They then apply to rebuild the family home which is refused countless times. All this is going on whilst we have building firms constructing high-rise apartments across the island such as Portelet, the Water Front, the whole of the town.

This is unfair and smacks of the same scenario when Mr. Manning was trying to build a house for his family next to B&Q. and was refused by the planning minister at the time who owned B&Q.

When an outside company wants to build ugly apartment blocks or houses on our skyline and waterfront it's ok, but heaven forbid if you are local and want to rebuild your family home if it's set in a country location with some land around it.

Perhaps they have it earmarked in the new island plan for social housing that Andium can build with our local contractor Dandara?
To place a comment please login Login »

Tourism officials back revamp of centuries-old barns into holiday lets