Ministers back down on Christmas bonus as pensioners protest Budget debate 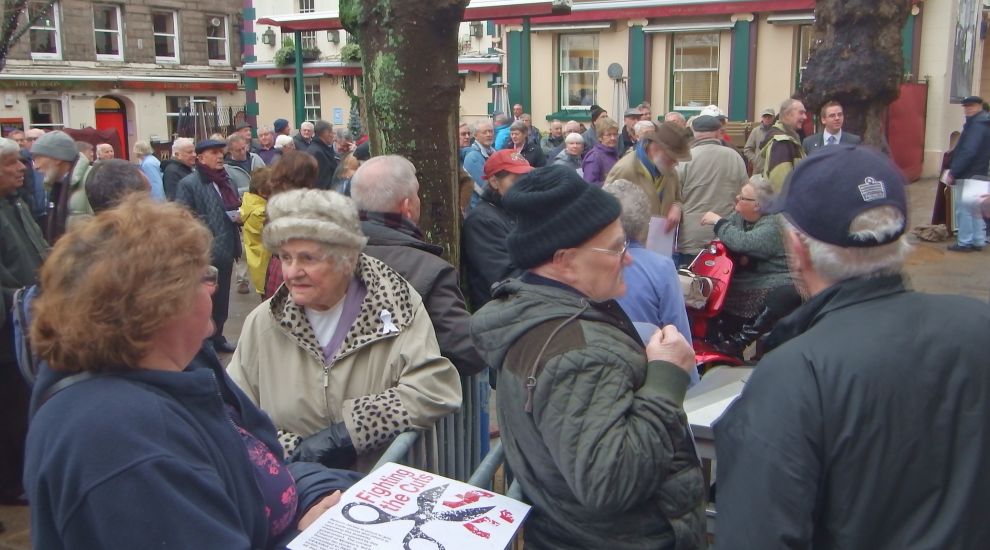 Ministers back down on Christmas bonus as pensioners protest Budget debate

Ian Gorst’s Council of Ministers has backed down from ending the Christmas bonus just hours before the Budget debate, with pensioners protesting as Members entered the States Chamber this morning.

Although they are pressing ahead with plans to phase out the extra £3,000 tax allowance for pensioners and mortgage interest tax relief, the Council of Ministers have signalled that they will keep the Christmas Bonus.

They still want an amendment guaranteeing an £85 bonus for all pensioners who don’t pay Income Tax to be scrapped – but have pledged to bring back new proposals for a mean-tested bonus in the next 12 months.

The budget, which is being debated over the next few days by the States, proposes measures that would increase tax revenue by £1.8 million next year – but it also sets up proposals that will go much further over the next few years.

Cutting both mortgage interest relief and pensioner allowances would ultimately increase Islanders’ Income Tax bills by around £15 million per year, but ministers’ plans are to gradually phase them out over 12 years.

The phasing out would start in 2017, and no new entrants will be allowed to get the extra tax allowance for pensioners.

The budget proposals are:

- Standard exemption for marginal-rate payers goes up by 0.9% in line with inflation.

- Mortgage interest tax relief to be phased out over 12 years.

- Added exemption for pensioners to be phased out.

- For top earners at 20% rate allowances for children to be phased out.

- Reduction in relief for non-residents.

- VED to be worked out by emissions for commercial vehicles.

Posted by Trevor Carre on Dec 15th, 2015
Tax the people, until they have nothing left. Then where will the States find the money to waste!
Posted by Tilly the Toad on Dec 15th, 2015
Why are they targeting the very people who have contributed all their working lives?? I think the States - especially Treasury & Chief Ministers should hang their heads in shame... how can they sleep at night?
Posted by Karen Jones on Dec 15th, 2015
Can you imagine anyone saving for their old age when the States only want to take from pensioners, especially those who have saved and are now paying for others LTC through tax. Apart from that they have never given anyone an incentive to save as in the UK with ISA's. So disappointing. Something must be done about the tax that higher earners are paying and our rich residents.
To place a comment please login Login »