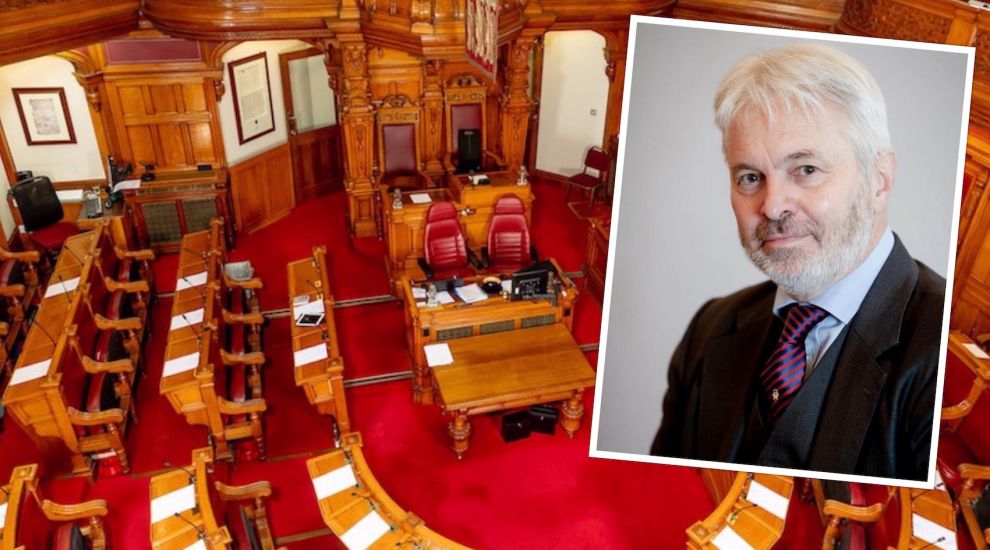 The Bailiff has told Ministers they should stay away from their officers when answering questions during States Assembly meetings after backbenchers raised concerns about the potential “interference."

With only one Minister out of 12 present in the States Chamber yesterday, Timothy Le Cocq also “warmly encouraged” Ministers to come to the Chamber - rather than joining from the government offices in Broad Street or from home - unless they are “otherwise unable to do so."

His ruling came after Scrutineers voiced concerns about the "interference” of officers with Ministers during question time and major debates.

Scrutiny Liaison Committee Chair Senator Kristina Moore said her panel had written to the Bailiff seeking such a ruling. She spoke in the Chamber after seeing the Chief Minister, Senator John Le Fondré, answering questions from his office in the Government's Broad Street headquarters.

“We have pointed out that there is a level of concern in relation to the potential for officers assisting Ministers in question time but also in major debates and of course the main reason for the letter was because of the coming Government Plan but also we raised the concern of these behaviours creeping into question time also,” she said.

She added that it was “perfectly possible to be socially distanced” in the Assembly and urged the Bailiff to require the presence of Ministers, noting only one out of 12, Health Minister Deputy Richard Renouf, was physically present.

The #Bailiff has been asked about #Ministers not being in @StatesAssembly when answering questions. He is “encouraging” #Ministers to be in the #Chamber if possible FYI there are currently just six (6) members in the #Chamber today.

The Constable of St. John, Andy Jehan, noted on Twitter that only six politicians were in the Chamber yesterday. All States Members, except five who were either excused or ill, attended the sitting.

Senator Sam Mézec made a similar request referring to a previous ruling in which the then-Bailiff had declared civil servants should not be in the precincts of the Assembly.

“Things have now changed because of hybrid settings where you could argue that the precincts of the States Chamber now extends to the other side of a computer screen irrespective of where in the island that would be,” the Senator said, arguing it would ensure backbenchers have direct access to Ministers without “interference” from officers.

The Bailiff said the Standing Orders that allow remote participation were silent on the point raised by both Senators.

He however added: “But they are clearly, as I have ruled in the past, intended to permit Members to participate in the sitting, whereby for reasons of the pandemic they would otherwise be unable to do so.

“Those orders were not designed to extend beyond what is necessary to achieve that end and as far as is possible, the conditions that pertain in the Assembly should be replicated in the remote environment, the rules of the Assembly extend into those spaces as well.”

He concluded that Ministers should have “no greater access to officers and advice” than they would if they were in the States Chamber.

“Therefore, it seems to me that officers should not, unless it’s impossible to arrange otherwise, be present with Ministers during Ministerial Questions,” he said. “This applies also to non-Ministers answering questions in the formal environment of the Assembly.

“I appreciate that this ruling might be difficult to police, but I am conscious, as has always been the case that Ministers will act with integrity and with honesty as is expected of all States Members and will of course adhere to this ruling.”

The Bailiff, however, said he couldn’t require the presence of Ministers as the current position was “permissive."

Posted by John Sheen on Dec 14th, 2021
Let’s not kid ourselves, whether they officers are in the room with ministers or not, do people really think ministers write their own replies or speeches? Plus they all can be seen checking their phones for texts or whatsapp messages, no doubt getting updates from officers.
Are both Senators Moore and Mezec suggesting they never received officers help mid debate when they were ministers or read out an answer or made a speech written by someone else???
And in any event is it not better that politicians answer questions correctly, with the facts, rather than fumble their way through, get it wrong and mislead the public?
Posted by gordon le claire on Dec 14th, 2021
ban the use of mobile phone In the chamber
Posted by john garner on Dec 14th, 2021
Will this apply to "phone a friend" on who wants to be a millionaire ?
Posted by Paul Troalic on Dec 15th, 2021
At last the Bailiff has imposed something. I thought he'd fallen asleep since he took office. His inaction over important issues in recent years calls into question his very existence in the Chamber in my view.
Posted by Scott Mills on Dec 15th, 2021
Use the perfect excuse which pupils use, when caught using their handheld smart laptops at school "I'm phoning my dad/mum!". Shouldn't have phones in chambers, at least keep in line with the house of commons, as they copy everything else that happens there.
To place a comment please login Login »