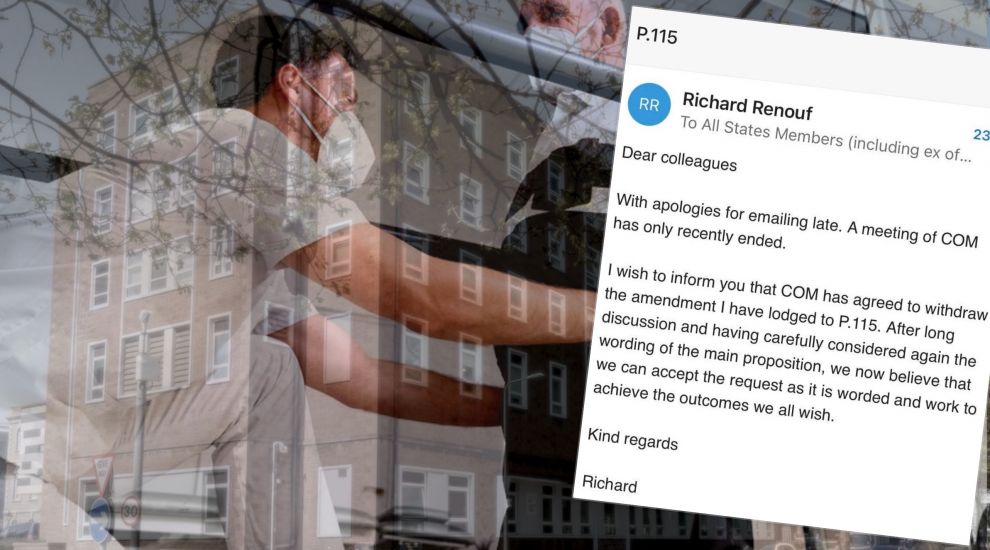 The Government will no longer be opposing a bid to reinstate the full suite of rehabilitation and stroke services that were previously available at Samarès Ward after a crunch Ministerial meeting resulted in a U-turn late last night.

Health Minister Deputy Richard Renouf wrote to States Members shortly after 23:00 - straight after the Council of Ministers meeting - to inform them: “After long discussion and having carefully considered again the wording of the main proposition, we now believe that we can accept the request as it is worded and work to achieve the outcomes we all wish.”

It's believed that the significant policy shift on the eve of the key vote over the future of rehabiliation services came after some Ministers threatened to break ranks. 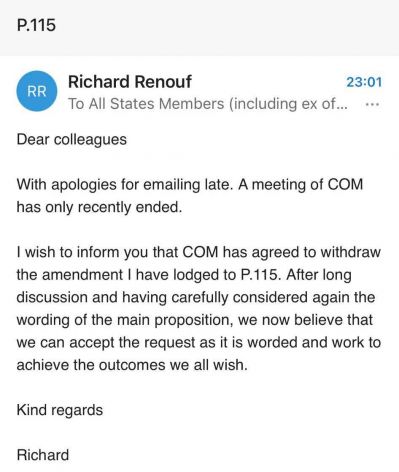 Pictured: A copy of Deputy Renouf's email obtained by Express.

More than an hour before Deputy Renouf's email to States Members, Deputy Chief Minister Senator Lyndon Farnham was already contacting islanders to let them know that he would be supporting the proposition "after careful consideration and discussions with Ministerial colleagues and our health professionals."

He said he had "full confidence" that the Health services would be able to deliver on its "aims" and "what it intends to achieve."

The debate on the proposal put forward by Senator Steve Pallett to reopen the Overdale-based ward - or provide the same facilities "at another suitable location" - got underway this morning.

Ahead of the debate, Deputy Renouf had pushed for the proposal to be watered down, with an amendment that committed to a “progress report by 1 March” but removing references to the reinstatement of Samarès Ward.

Pictured: One of the emails sent by Senator Farnham in advance of the Health Minister confirming the amendment would be withdrawn.

In his email, however, he said that amendment would be withdrawn.

It comes following significant pressure from stroke survivors, States Members, campaigners and medics at several levels, who had complained that moving rehabilitation services to Plémont Ward has been a retrograde step.

Whereas Samarès Ward gave patients their own rooms, specialist equipment and easy access to the outdoors, Plemont Ward placed all individuals needing rehabilitative care on a shared bay with around five people sharing a single toilet. The ward has been described as significantly smaller, with narrower corridors, and bringing patients out for fresh air is more difficult to achieve. A senior medic with experience of both wards told Express that they believed the environment at Plemont Ward could hinder recovery.

In response, the Government has in the past week released a promotional video about Plemont Ward and held urgent briefings with politicians and the media to make the argument that Plemont Ward should remain the key rehabilitative facility.

Medical Director Patrick Armstrong and Chief Nurse Rose Naylor wrote to States Members to tell them that reopening Samarès Ward would be a “mistake”.

Campaigners and States Members have so far welcomed the decision to backtrack from this position, but some have told Express they’re not ready to celebrate yet and are sceptical about the Government’s intentions, fearing they may have found a “technical” way out.

Senator Pallett's proposition asks for States Members to request that the Health Minister "reinstate the full suite of stroke and injury rehabilitation services facilities and beds at the earliest opportunity, but no later than 1st March 2022, either at Samarès Ward at Overdale or at another suitable location, as determined by the Minister".

It also asks that the Minister ensures "ensure that a purpose-built rehabilitation unit offering the full suite of stroke and injury rehabilitation service facilities and beds formerly offered at Samarès Ward is delivered as part of the development of a new hospital campus at Overdale, or at another suitable location."

It's believed that the reference to "another suitable location" in each may have played a crucial role in last night's Ministerial decision.

Opening the debate on his proposition this morning, Senator Steve Pallett questioned why the decision to move rehabilitation services to a "cramped and ill-equipped" location had been made - something he said he only learned about through the media despite being an Assistant Health Minister at the time.

He said that, despite seeking explanations about who made the decision to "uproot" services, he had never received a clear answer from Government.

Senator Pallett went on to blast Government for creating a situation whereby patients are "unacceptably forced out of hospital" and into a community-based service "that either can't cope or it not ready" in the name of the Jersey Care Model.

Reading accounts of stroke and severe injury patients being "squashed together with no privacy" in Plémont Ward, he described the current situation as "scandalous."

The debate continues, and you can follow Express for all the latest updates…

Posted by Aston Francis on Jan 19th, 2022
Congratulations to Senator Pallett and all who supported him and some of our most vulnerable patients for withstanding the pressure from the minister of health and those who opposed what is right for the patients in need of advanced rehabilitation. It is sad that and plainly obvious that some of our senior Health leaders seem to have their loyalty on the side of the minister rather than those who suffer. GMC Good medical practice describes what it means to be a good doctor (also applies to doctors/managers). It says that as a good doctor you will: make the care of your patient your first concern and establish and maintain good partnerships with your patients and colleagues
maintain trust in you and the profession by being open, honest and acting with integrity.
Posted by nigel pearce on Jan 19th, 2022
The assistant health minister only learnt about the decision to move the rehabilitation services through the media. Surely he knows by now that only the select few get inside information from our authoritarian government.
Posted by IanSmith97 on Jan 19th, 2022
This escapade does not bode well for the future “community care” model for us.
You should all read the 90+ page document (I have) and be very afraid for your future health care.
Posted by Keith Marsh on Jan 19th, 2022
Those little words "another suitable location" gives this ministerial lot an open book ~ WHO decides what is "suitable" or not ?
The Jersey Care Model was wrong from the start, it will never work as care in the community is never properly staffed or funded ~ and this is what our NEW HOSPITAL is based on.
Jersey Care Model is still wrong and so is the NEW, too small, hospital.
Posted by Denise Shrives on Jan 19th, 2022
Sorry but I don't believe the Health Minister's statement, it's easy to "say it" but another thing to "do it". I have lost all faith in Deputy Renouf and am very, very surprised at the letters from Mr. Armstrong and Chief Nurse Rose Naylor, surely as a surgeon and Chief Nurse they must know how important really good rehabilitation is !
To place a comment please login Login »