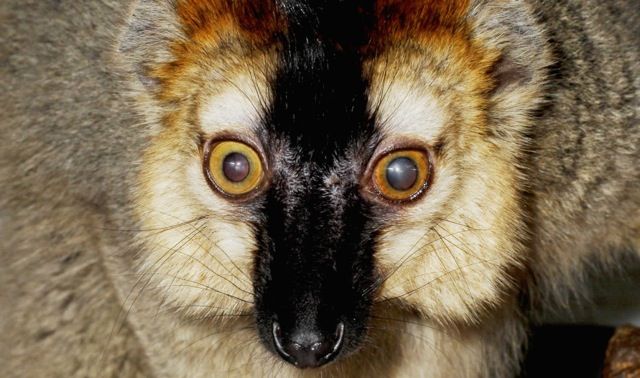 This lemur has been given a new lease of life after veterinary surgeons performed a ground-breaking operation to remove cataracts from his eyes.

Sam the red fronted brown lemur started developing cataracts in January, and Durrell’s keepers called in the experts from the Animal Health Trust to assist. They sent over two specialist surgeons – Claudia Hartley and Rachael Grundon – to perform the surgery over here, and Sam has just been given the all-clear after a six-week recovery period that had keepers nervously hoping for the best.

Now he’s back with his friends at Durrell’s Lemur Lake and keepers say his vision and accuracy are back to normal.

Claudia Hartley, who is the Head of Ophthalmology at the AHT, said that her job was the best in the world.

She said: “In the past, we’ve helped elephants, bears, lions and even eagles to see again. Whether it’s a beloved family pet or a more exotic animal, there is nothing quite like the feeling of restoring sight to an animal – especially witnessing them see again for the first time. It really is the best job in the world!”

And Durrell’s Kelly Barker said that they were grateful to have Sam back to his old self.

She said: “Our staff are really attached to Sam, he’s a real character. But we’ll do anything we can to improve the quality of life for any of our animals.”

An excerpt of the operation can be viewed here: www.durrell.org/blind-lemur