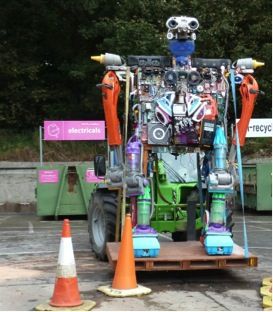 The well known face of recycling in Jersey is being binned at Bellozanne.

Mr Robot, who has been helping TTS raise awareness about recycling for the last three years, is off to the UK to be recycled himself.

Mr Robot was created out of waste electrical items by local artist Ian Rolls back in 2012 and has since travelled all over the Island making a number of appearances at Jersey Live and at several schools.

He'll be standing down from his duty welcoming customers to the Household Recycling Centre at Bellozanne at the beginning of next month so that there's more space for cars at the Centre when it's busy.

TTS had considered moving him to a new home but because of his age and fragility they say he wouldn't have survived the move.

TTS Recycling Manager Emma Richardson-Calladine said: "Mr Robot will be missed from the Household Recycling Centre but he will be disassembled and all of his electrical parts will be sent to the UK for specialist recycling.  He has been a huge success and we hope to create something equally engaging in a future campaign, watch this space!"