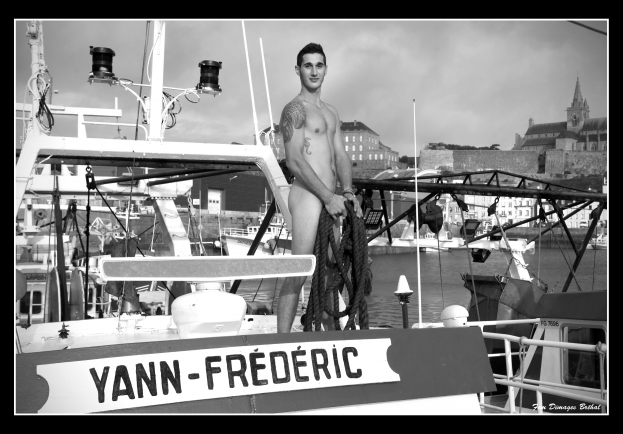 A local company hopes a saucy French calendar will reel in Islanders and help sell one of the biggest events in the Normandy calendar.

Granville’s fishermen got their kit off to help make money for the town’s carnival in February and have been caught up in a media frenzy ever since.

Their calendar has made the French national news and has been flying off the shelves since it landed on Jersey’s shores.

Aurelie Leroy who runs the Maison de La Normandie et de la Manche in Halkett Place said she sold five as soon as she put it on sale in her shops.

The calendar costs £5 and all the proceeds are going towards the Granville Carnival.

Aurelie said: “Basically it happens every year around Mardi Gras – 13 until 17 February. It attracts 200,000 people, it’s the biggest carnival in the west of France when the town is closed off to traffic.

“It goes back in history to when the fishermen went cod fishing in Newfoundland. They did a fete to wish them luck before they went off. Every year it got bigger and bigger and it’s a very strong tradition in Granville.

“It’s an event for all the family, it’s very family orientated, lots of events for children.”

Aurelie hopes the idea will catch on here and is challenging local fishermen to make their own calendar too.

Portraits of artists on display at Maison de la Normandie