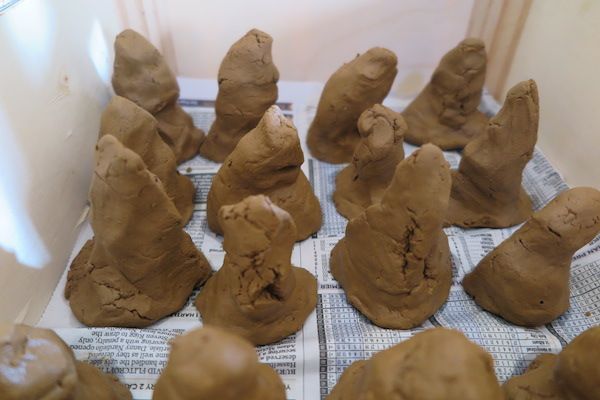 Thousands of "little people" are taking over Jersey's archaeological site.

‘Les P’tits Faîtchieaux’, as they are known in Jersey French, are the work of a team of artists who have created them out of local clay.

According to folklore, Les Faîtchieaux were believed to live in the local dolmens where they were generally active and helpful, doing housework in exchange for cake, but were also known for mischievously hiding belongings.

Now it's your turn to have a go at making some as the idea of this Skipton Art Series project is to get as many people involved as possible to help create an exhibition like Antony Gormley's "Field for the British Isles."

It has already started hotting up at La Hougue Bie - those that have already been made have now been fired in a pit oven ready for when the site re-opens to the public on 25 March.

The little army of figures have been installed in the Neolithic passageway, ahead of Friday's spring Equinox. The alignment happens twice a year when a beam of light travels to the very back of the passageway and illuminates the chamber where they are on display and the Jersey Arts Trust hope it'll be a spectacular show.

Over 15 collaborative art projects are planned this year as part of the Skipton Art Series developed by the Jersey Arts Trust.

Skipton International's MD Jim Coupe said: “We are delighted to support the Skipton Art Series and play a part in stimulating and encouraging local artist collaboration and creativity. The plans for 2015 are very exciting indeed and it is good to see artists wholeheartedly embracing the concept.”

"We need to think about arts like we do about finance: big and internationally"