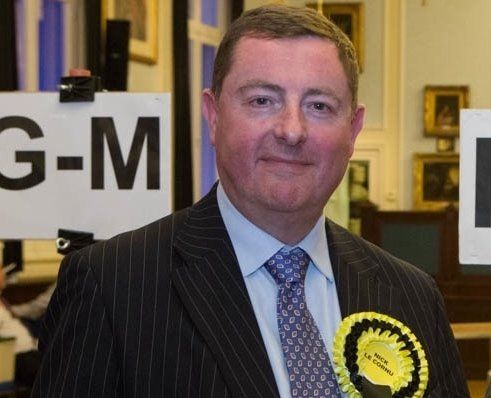 Moments after winning a States seat in last night’s by-election, Deputy-elect Nick Le Cornu said that he hoped to lead a new political party in the October general elections.

The 55-year-old lawyer who has stood for election several times since 1996 polled 248 votes last night, 47 ahead of his nearest challenger in St Helier No 1 district. Mr Le Cornu said that he and Sam Mezec, who won the other by-election in St Helier No 2 district, would continue to work together under the Reform Jersey banner, and that the group could go into the October elections with a group manifesto and a group of candidates.

“There has to be real opposition to the existing power bloc,” said Deputy-elect Le Cornu, after celebrating with supporters.

“It depends on our ability to organise and create Reform Jersey as an organisation.

“That is the potential path, to move from a one-party state to a genuine democracy where there is a manifesto, there are candidates, and it will be clear that these are Reform Jersey candidates. It will be a whole set of people standing together in solidarity representing for the first time the working people of Jersey.”

On its Facebook page, Reform Jersey describes itself as a “political pressure group that campaigns for greater democracy in Jersey as well as other progressive causes”. The group was established in 2012 by Deputy-elect Mezec, and campaigned unsuccessfully in the build-up to the reform referendum for a Clothier-style reform removing Constables and Senators from the States.

Ironically, the two former Deputies who Le Cornu and Mezec are replacing, Shona and Trevor Pitman, were members of the last political party to hold seats in the States, the Jersey Democratic Alliance. The left-leaning group held four out of 53 States seats at its peak, before collapsing.

The Pitmans lost their seats after being declared bankrupt when they could not pay the debts they saddled themselves with after pursuing a long and unsuccessful defamation action against the JEP and estate agents Broadlands.