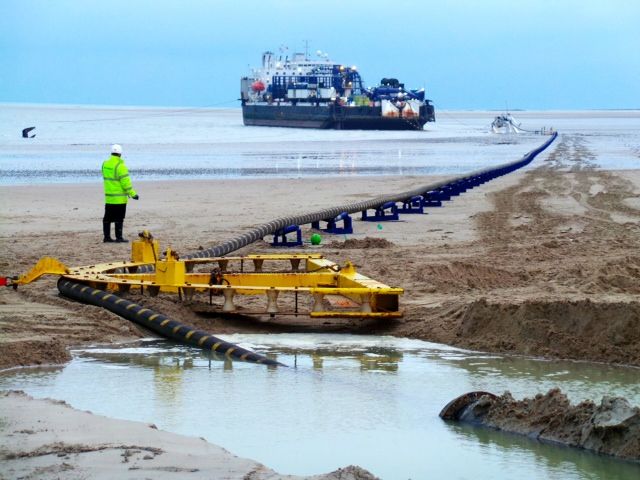 The new undersea cable connecting Jersey to the French energy grid has started its 50 metre-per-hour trip across the sea from Normandy.

The £70 million cable will stretch 32 kilometres from Armanville Beach to Long Beach at Gorey, and is expected to reach Jersey around the beginning of June.

The vast majority of Jersey’s power comes from France under a ten-year, one-billion-euro contract signed with EDF in 2011, and the 100 megawatt cable which will be buried two metres beneath the seabed will help to provide a more reliable connection.

Jersey Electricity CEO Chris Ambler said: “Today is a very special day in the history of Jersey Electricity, another milestone in our 30-year relationship with the French power industry and further evidence of the success of our partnership with Guernsey Electricity in the Channel Islands Electricity Grid. We are all absolutely delighted to see this long process finally come to fruition.”

And he added that the new link would have enough capacity to allow Jersey to sell electricity into the European grid if long-mooted plans to develop tidal power here ever reach fruition.

Mr Ambler said: “A further link, to replace our decommissioned original cable EDF1 over the same route, is already on the drawing board. Not only will these links guarantee Jersey a long-term low carbon future, when large-scale renewables such as offshore wind or tidal become viable, they could facilitate the exportation of power from Jersey.”