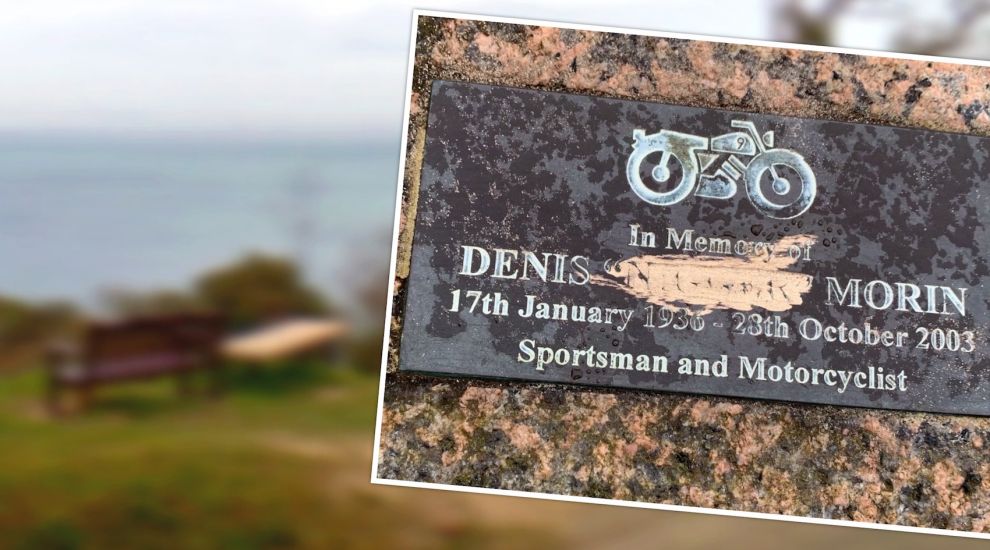 A plaque on a memorial bench which included a racist term will be replaced without the N-word after it was stolen last week.

The offensive slur appeared on a granite bench at the top of Bouley Bay hill in tribute to Denis Morin, who passed away in 2003.

Mr Morin was a member of the Jersey Motorcycle and Light Car Club, where he was referred to by the N-word as a nickname, as he was often covered in oil.

The offensive word was scratched out by Todd O’Donoghue, a friend of Mr Morin, last month, when the Black Lives Matter movement became a global focus, but the plaque has now been removed entirely.

Pictured: The memorial bench is located at the top of Bouley Bay Hill.

Terry Le Main, who knew Mr Morin well, said: “It’s now been stolen but I’ve spoken to the family and there is a plan to replace it, obviously without that word. From his early days as a mechanic at Cleveland Garage, Denis was always splattered in oil, so the name just stuck.

“There was no malice behind it, but times change so getting rid of it is the obvious solution. It also means that the Morin family can move on and remember Denis for the lovely chap he was.”

The resurgence of the Black Lives Matter movement following the killing of George Floyd by a US police officer in May has led to a reappraisal of language and historical links to slavery and prejudice.

In Jersey, a statue of slave trader Sir George Carteret, who is responsible for the naming of New Jersey, was daubed in white paint and its appropriateness has been called into question.

Posted by nigel pearce on Jul 21st, 2020
Am i the only one who is offended by all these groups trying to rewrite history to suit their own agenda? Things occurred in the past which may not be acceptable now, but they happened in different times and circumstances and were acceptable then.
Posted by Steve Liron on Jul 21st, 2020
Nope, I get offended too Nigel. In fact I’m offended by how easily offended everybody seems to be by the least offensive – admittedly in my opinion – comment being made. What happened to sticks and stones may break my bones eh…..
Posted by Jon Jon on Jul 21st, 2020
Sorry I wouldn’t of changed that bench,it was that guys nickname ,how he was known...he was not being racist..to much pandering to these groups now,it’s like this bend the knee business at every sporting fixture ,ridiculous!
To place a comment please login Login »