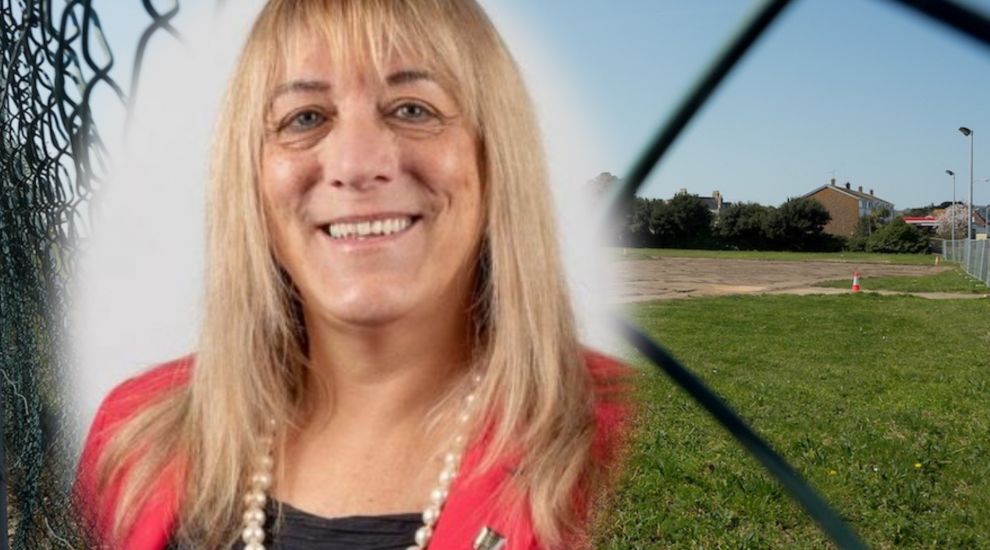 The Constable of St. Lawrence has made an official push to get Millbrook playing field off the hospital site shortlist.

Having previously voiced her opposition, St. Lawrence Deputy Deirdre Mezbourian has now published proposals to knock it off the shortlist which will be voted on by politicians in September.

In a report accompanying her proposals, the Constable explains that the area is “the last open green space from West Park to beyond Beaumont and its designation of Protected Open Space within the Island Plan gives it, I understand, the highest level of protection against development."

“The importance and value to us all of open green space cannot be over emphasised, be that within our town or, as in this case, within our suburbs,” she said.

She also noted that the Citizens’ Panel – a group of islanders responsible for drawing up criteria for the hospital site shortlist – acknowledged the “detrimental impact the hospital would have, particularly on the historic and built character of the area.”

Not only would building there mean the loss of green space, according to the Constable, but it would also be likely to spell the end for Listed buildings in the area, such as St. Matthew’s Church (the Glass Church).

She further added that losing the area would put a stop to charity car boot sales and sporting activities in the area, and also pose a challenge for the Jersey Battle of Flowers.

“Correspondence from the Jersey Battle of Flowers Association strongly objects to losing the Millbrook Playing Fields as it would have a significant effect on the Battle which, as we know, annually attracts nearly 20,000 spectators (many of whom are tourists), as well as involving thousands of local volunteers and participants,” Constable Mezbourian explained.

Speaking to Express, Constable Crowcroft went so far as to suggest that officials had listed sites they already knew would not be met with approval by the States Assembly or public as part of a “cynical ploy” to narrow the list to their favoured zones.

Posted by Richard Milner of leeds on Aug 10th, 2020
So three down and two to go.
Overdale should be removed as access is so difficult. The roads are too narrow as it is. I would love to see how they would get round this problem.
I feel that People’s Park is still the best site available but they should guarantee to turn the current hospital site into a green space upon completion.
Posted by nigel pearce on Aug 10th, 2020
It's obvious that Overdale has been decided on and the public of Jersey have been taken for idiots who wouldn't be able to see through the plot.
Overdale is not the best place for this. It would have better potential as residential use.
Posted by Keith Marsh on Aug 10th, 2020
The Public have already told the Government that Peoples Park is a "No Go Area". I support the view that ALL parks should be retained. As St Helier sprawls ever outward all green spaces are a must for the environment. Overdale is a massive site and could easily be re-developed, once the access has been resolved.
Posted by AndrewRoberts80 on Aug 10th, 2020
Surely the best site is the one that is easiest to access in an Ambulance. We all know that every second counts in such a situation and Jersey already has miles of beaches and Parks galore. What is the point of paying professionals to chose the best site and then rubbishing them when they do their job. Overdale will be the most expensive site to build on with complicated access for Ambulances, Buses, and pedestrians. People's park is by far the most sensible (in my humble opinion).
Posted by Paul Troalic on Aug 10th, 2020
As per usual our politicians, and in particular the council of ministers are displaying their nativity and their lies are being exposed for all to see.
Their ploy was to hand over the decision on potential sites to a supposedly representative group made up of the public.
It is clear to me from reading the requirements for membership that this did not happen and in fac5 the group comprised people of European origin who probably know nothing of the history of the sites let alone visit their and critically appraise them.
The secrecy involved is mind boggling.
Now not only do we have a government that is completely out of touch with the public but now we have a group of people making one of the biggest decisions in our most recent history that don’t have a clue what they are doing and have no personal investment in the decision.
Or States of Jersey has really has sunk to an all-time low in my opinion.
By passing the buck to some unsuspecting group of disinterested people has showed just how callous and stupid they really are.
There is no hope for them.
Posted by Sidi Smith on Aug 10th, 2020
People's Park was previously selected as the best option. Nothing has changed. Our politicians caved in to a vocal minority (5,000 out of 100,000+) I am delighted that the Park is back to be reviewed against the other options. The recent Outcome Matrix has again shown it to be the best option. Cheapest, fast build, great access, and don't forget it's the only one near the bus terminal.
Posted by Jon Jon on Aug 10th, 2020
Who were this group of people who picked these sites..Charlie's Angels? Two sites picked that were never going to be used, leaving only Overdale. Anyone with a brain cell knows a blank site on a level piece of land is the best and cheapest option, hence why Overdale should be ruled out....has anyone noticed why a field directly opposite Overdale on Westmount has had the granite wall removed and security fencing put up...another ploy maybe?
To place a comment please login Login »