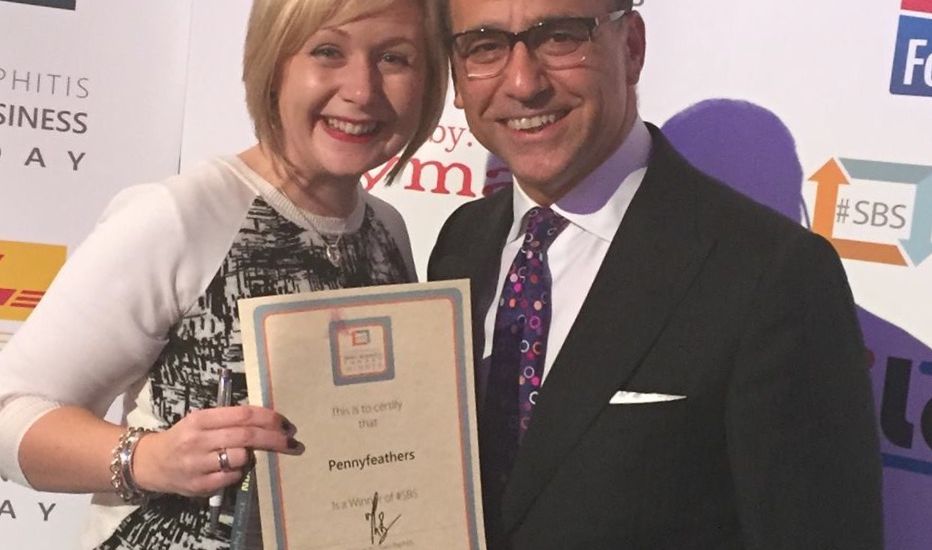 The owner of a Jersey beauty salon got more than pennies for her thoughts about her business – she got some top tips from an old dragon.

Penny Downes met Theo Paphitis at a gala event at the ICC in Birmingham last week after her salon Pennyfeathers was picked as one of the retail magnate’s favourite small businesses on Small Business Sunday.

Every Sunday between 5pm and 7.30pm small business owners have to sell their business to Mr Paphitis in just one tweet. Each week he chooses his favourite six to re-tweet.

The St Clement salon was the first Jersey business to grab his attention when Penny tweeted “Pennyfeathers a small Jersey salon putting the treat back in treatment” and beat off stiff competition last year from thousands of other small businesses.

Before picking up her award from Theo himself she got to spend the day networking with other winners and to hear from other well known business people including the director of online furniture store made.com and Rob and Paul Forkan, the founders of Gandy Flip Flops, who lost their parents in the 2004 Asian Tsunami and who wanted to make money to build an orphanage.

Penny said: "Apart from being quite inspired about building a healthy business, I took a lot from their advise about budgeting for marketing, not spending a fortune, and using social media."

Penny then got to spend ten minutes talking to Theo about her business in Jersey.

She said: "Everyone else got seconds with him, I got 10 minutes, a large chunk of time, I wouldn’t give up. He asked me about the salon, he knew Jersey very well. He asked if I had enjoyed the day, what had I taken from the day and I got him to sign his autobiography. It was very exciting. He’s a really genuine, down to earth gentleman, he makes you feel at ease."

Penny said she'd encourage anyone with a small business on the Island to have a go at tweeting him on a Sunday as it's had a really positive effect on her and her business.

She said: "The win is a boost to your confidence, to get the support from Theo and the other winners and just for the whole experience and meeting people and listening to them. It was a really uplifting and inspiring event. I came back with so many ideas. I just couldn’t get them down on paper quick enough!