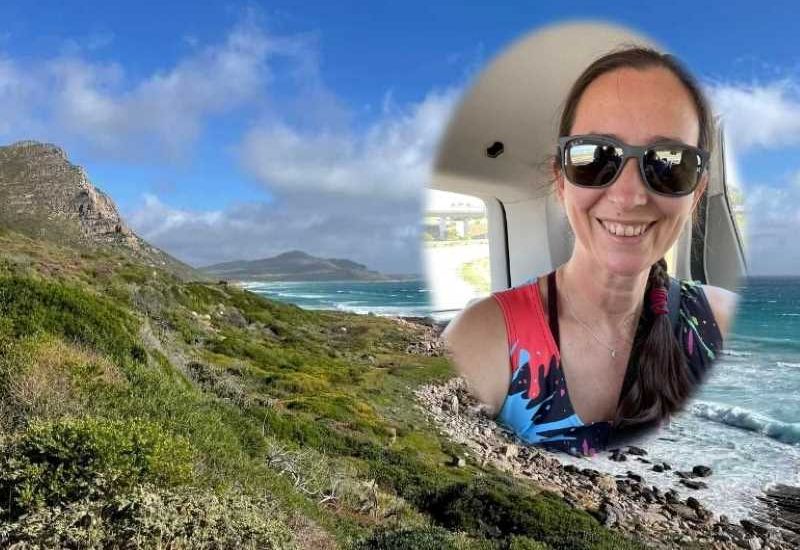 A long-awaited trip back home to South Africa is going to last longer than expected for one Guernsey resident after the omicron variant of covid-19 was discovered midway through her holiday.

Nina Mattinson lives in Guernsey with her husband Jeremy. She works in financial services and spends a lot of her spare time running, including with the Thirty Thursday group which she founded.

Like many others who have settled in Guernsey, Nina had gone a long time without seeing her family. Nina and her mum, who is not well, had gone nearly four years without seeing each other.

Nina's pre-Christmas trip was meant to last two weeks. She flew to South Africa last month and was due to return to Guernsey this past weekend and go back to work today.

However, after a few days in South Africa, Nina woke up to numerous messages from friends in Guernsey warning her that the UK had put South Africa and other countries in Southern Africa on its travel red list after discovery of a new variant of covid-19 now known as omicron. 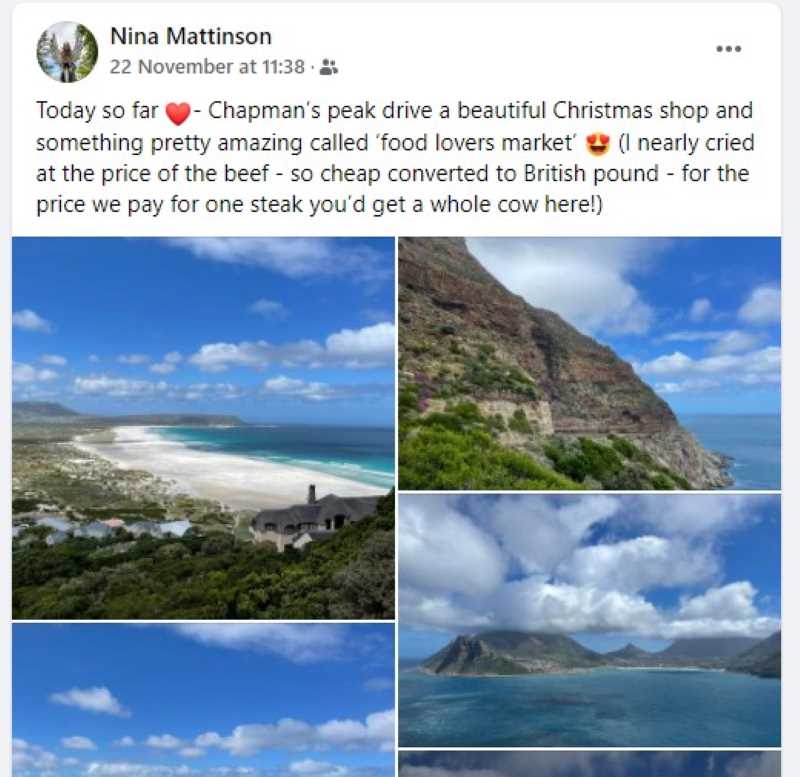 Pictured: Nina was enjoying her trip home to South Africa when travel restrictions were suddenly imposed following the discovery of omicron.

In a separate piece published today, Nina tells Express readers in her own words about her experience since the unexpected imposition of firm travel restrictions on anyone leaving South Africa.

She believes people directly affected by the sudden changes in travel rules should have been offered advice and support sooner.

"I had absolutely no idea what to do," said Nina.

"Almost immediately, panic set in. There was a lot of confusion and uncertainty when trying to speak with anyone in the travel industry. Having had this news effectively on a weekend, I couldn’t get hold of anyone who could offer advice as most places you would think to call were shut.

"I was and still am quite angry that no reasonable arrangements had been made for the safe return of UK citizens and residents who were left stranded. I strongly feel that the imposed quarantine charges should have been covered by the UK Government, especially for anyone who could prove flights had been booked prior to the announcement and that they had not chosen to travel at that time."

Nina originally planned to be back at work in Guernsey today. She is double vaccinated and carefully planned the timing of her trip under the previous rules for travel between South Africa, the UK and Guernsey. However, she now needs to pay £2,300 to quarantine in a hotel in London on her way back to Guernsey. That is just one of the many obstacles Nina has faced in her efforts to get back to the island.

"I received no information from the airline or from Expedia, who I had booked flights through. In fact, Expedia agents I spoke with had no idea anything was happening. The only help I had to navigate the minefield was from my husband who was still in Guernsey. He was helping where he could from Guernsey by telephoning the UK numbers to save on roaming fees, etc. There has been so much to deal with."

Pictured: Nina is one of many people affected by the sudden changes in travel rules.

The new travel restrictions were announced a week before Nina was originally scheduled to fly out of South Africa. She asked numerous organisations for help. They included the airlines she was booked with, her travel insurance company, the British Consulate and the UK Government through its website.

Nina was unable to book a quarantine hotel because they had not yet been set up. She had to wait for her flights to be cancelled so that she could re-book them. She needed to arrange pre-travel covid test centres in South Africa and the UK, but was unable to do so without confirmation of flight and quarantine hotel details. She found out that she would need to fill in a passenger locator form 48 hours before flying and include on it all confirmed quarantine information.

Realising that she could not do all this in time for her flight out of South Africa, Nina had to accept that her return to Guernsey would be delayed. This has meant taking additional and unpaid leave from work and thousands of pounds of unforeseen expenditure to stay in a quarantine hotel in the UK and cover other costs.

"It has in the end been impossible for me to get an earlier flight than 13 December to allow myself the time to make arrangements required to travel under red list rules.

"We do not have the money and I would rather have used this money to help my mum get better but my husband is paying my quarantine for me so that I can be home with him and our cat for Christmas Day. I have booked my pre-flight covid test for the 72 hours before the flight. I am doing everything I can to get home and it has been and is a hugely stressful experience and has been extremely costly to me.

"Dealing with the stress from this has been overwhelming and the stress I am having is also impacting on my mum's health and has hugely affected our time together as I have for this last week been trying to sort everything out and not been able to do things with her."

Nina understands that the actions taken by the UK and other countries could not have been foreseen, but she feels that some official guidance should have been ready given the reasonable chance that something like this was going to arise at some point. 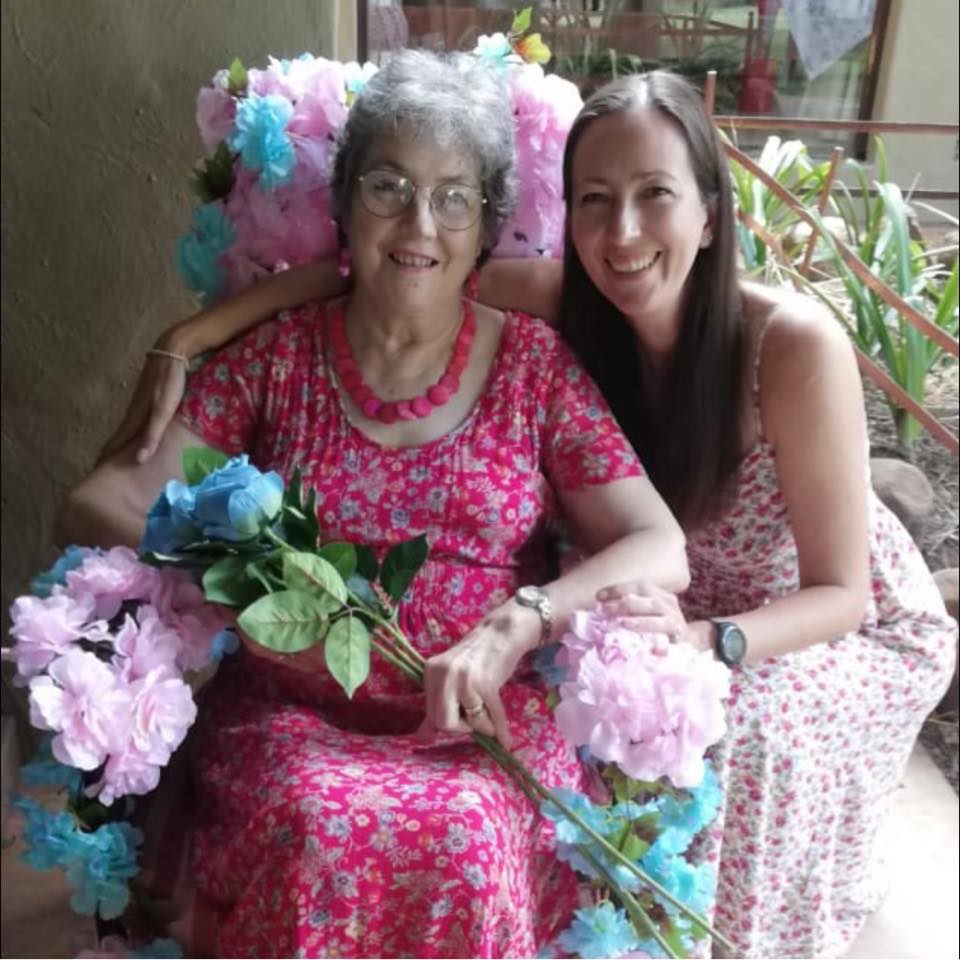 Pictured: While in South Africa, Nina has been spending valuable time with her mum after not seeing her for nearly four years.

"To be clear - there has been no advice from anyone about the best way to deal with this situation.

"Most people could only offer a ‘good luck with it all' as they too would not know which way to turn. If I'd had a clear plan or step-by-step guide, I may have been able to navigate the regulations and book a quarantine hotel, the pre-travel test, etc. in South Africa in the short window I had, but there really was just no time available to make this happen whilst stabbing in the dark at what the best options were for me. I have spent just about every hour of every day researching and looking into my situation, speaking with whomever I could and trying to find the best way forward for myself."

Nina said that in South Africa most people are more relaxed about the discovery of the omicron variant. She said the biggest concern is the economy as it was already struggling to recover from the impact of earlier phases of the pandemic.

"The South African Rand is very weak and has fallen even more following last week's announcement. The country was looking forward to inviting much-needed income from travel. This could impact the country for many years to come.

"South Africans all agree - they may have identified the strain but it did not necessarily originate here and this is effectively crippling the economy. Travel centres such as Cape Town were very quiet while I was there and that was before the announcement. It is sad that the economy of South Africa will be hit so harshly by lack of tourists so close to Christmas."

OPINION: Omicron and my struggle to get home for Christmas - Nina describes the challenges she has faced while trying to get back to Guernsey from South Africa