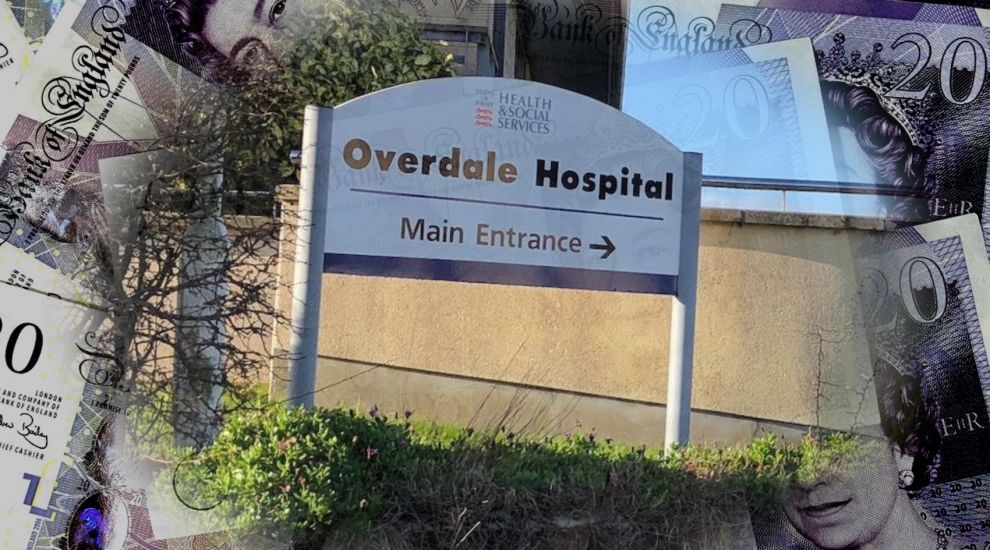 Delivering a brand new hospital for Jersey at Overdale is expected to cost up to £804m, it has been confirmed.

While the maximum cost of building the facility is set to be £550m, the project carries ‘additional costs’ that could reach up to £254.5m.

Those include acquiring extra sites (£25.3m), relocating services currently operating at Overdale (£5m), demolishing the current hospital (£7m), and a contingency fund (£174.3m) to account for any unforeseen issues that may arise.

The breakdown was revealed in a 202-page report explaining why Overdale had been chosen as the preferred site over People’s Park, whose maximum estimated total was £60m cheaper.

While the People’s Park cost had to factor in a £23.1m spend on a replacement park, unlike Overdale, it still ultimately came in cheaper.

“This differential is largely driven by the greater complexity associated with the Overdale site including for example, but not limited to, additional anticipated highways works, demolitions and relocations, topography, programme and planning,” the report explained.

However, it noted that both the Council of Ministers (COM) and Political Oversight Group - a panel of politicians leading work on the future hospital project alongside civil servants - agreed that cost shouldn’t be the deciding factor.

“Both the POG and the COM considered that over its lifetime, the impact that a new integrated health and care facility at Overdale would have on positive health and wellbeing outcomes for islanders outweighed the difference in estimated costs,” added the report. 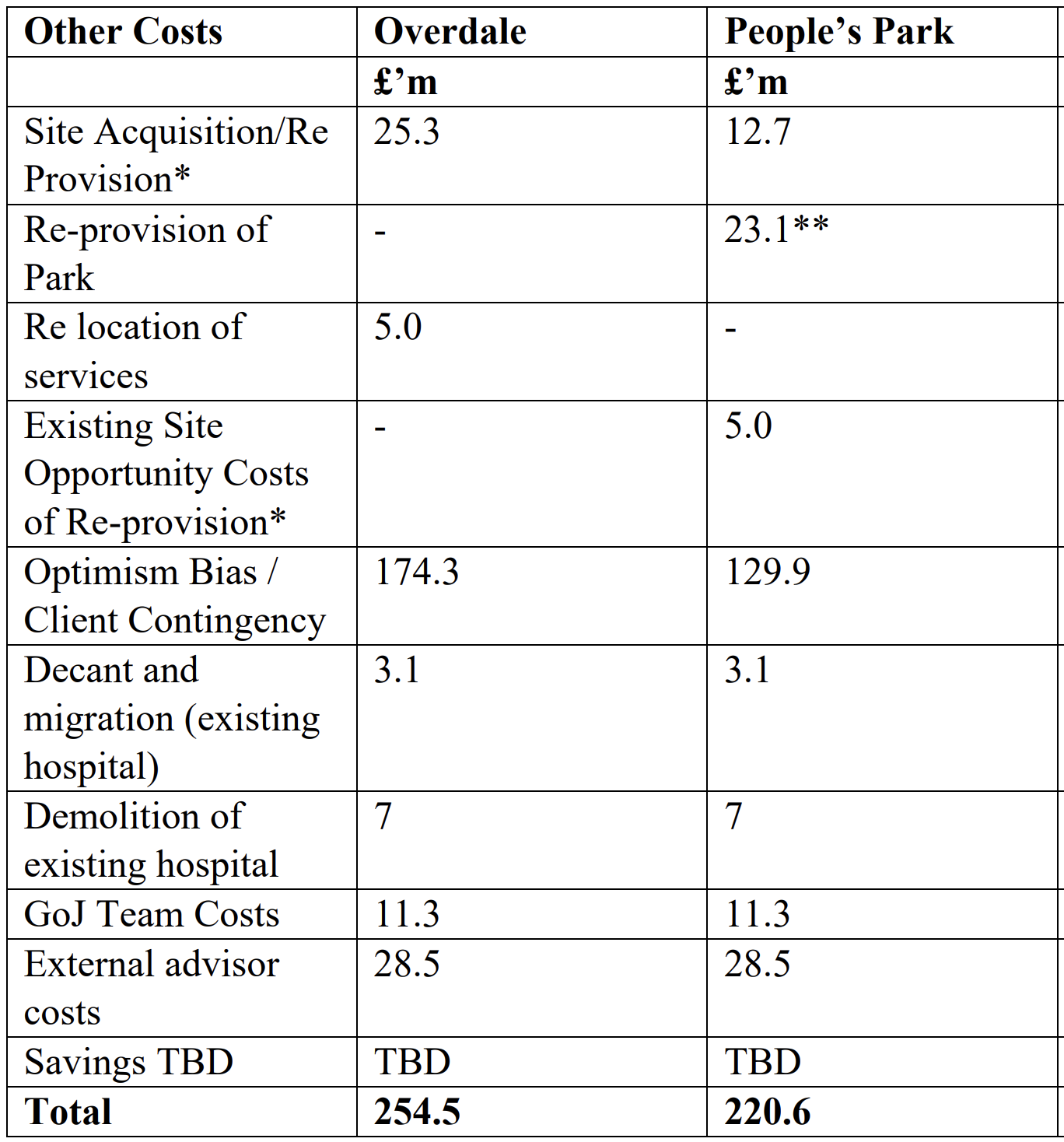 Pictured: A breakdown of the 'additional costs'.

With the maximum costs now confirmed, politicians are now facing the question of how to fund the overall project.

Previous experience would suggest that borrowing is likely to feature - either as a way of funding the whole project or part of it.

For the £466m Future Hospital project - a bid to revamp the current site which was eventually scrapped with write-off costs of £27m - the States Assembly agreed to a “blended solution.”

Under those plans, £275m was to be borrowed, and the rest taken from the ‘Rainy Day Fund’. Currently, the emergency fund sits close to £900m in value.

Prior to that decision, the then-Treasury Minister had been exploring the possibility of financing the project with the help of a £400m Sovereign Bond, inspired by the strong response to the island’s first dip into capital markets in 2014: a £250m bond to fund Andium’s programme of social housing. 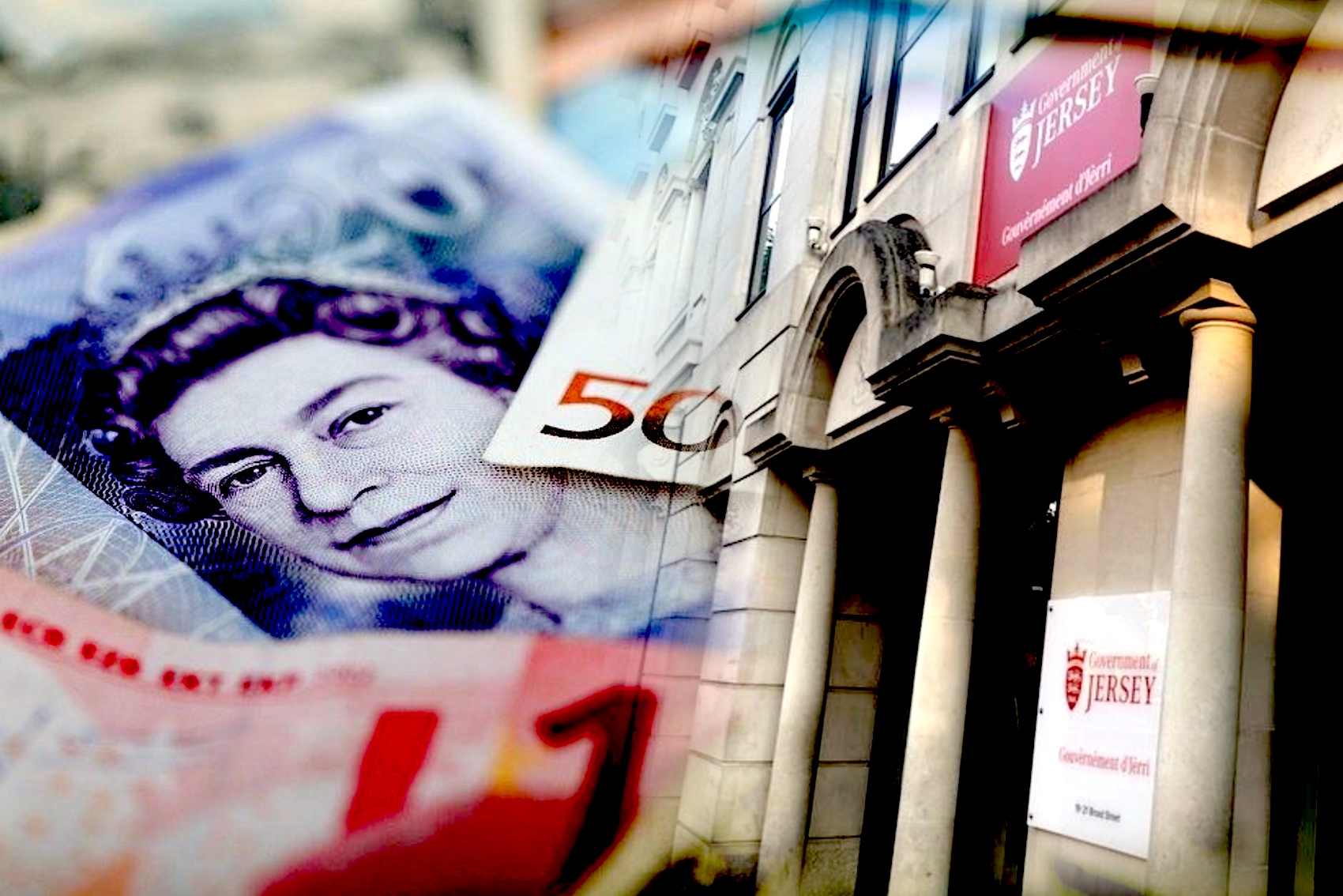 Pictured: Borrowing is likely to feature in any funding plan.

With borrowing, of course, comes repayment interest - something which could push the overall cost of the project above £1bn.

Whatever the preferred funding method, it could be that it is used to fund multiple projects at once, rather than providing a solution for the future hospital project alone.

Minutes from a meeting of the Our Hospital Political Oversight Group last year refer to “discussions about financing the Government capital programme as a whole to achieve economies of scale, as opposed to financing individual projects.”

Chief Executive Charlie Parker, who previously described the Rainy Day Fund as “under-capitalised”, is also working on plans for an “investment vehicle” to fund island infrastructure in the long-term - though it is not clear whether this will encompass critical infrastructure such as the hospital.

He said: “Jersey’s long-term infrastructure investment will remain underfunded while the financial approach remains that all money for a capital project must be raised and ringfenced before any work can proceed.

“The Chief Executive has developed proposals for the future funding of our island’s infrastructure which will enable investment to be accelerated.

“Details about these proposals have been delayed as a result of the pandemic but will form part of our long-term arrangements to rebuild our finances and maintain investment in long-term infrastructure initiatives.”

Posted by Scott Mills on Oct 7th, 2020
with anything done over here, may as well round it up to a biliion
Posted by Denise Shrives on Oct 7th, 2020
The States should bite the bullet and re-locate the Jersey Hemp Company, Warwick Farm is the best of the worst! People's Park should never be built on as it is a lovely green lung in a very busy Parish. I still think the new hospital could have been built where the Nightingale Hospital is, with 2 access roads already there and no homes to be knocked down, what's the problem ?
Posted by L Brindle on Oct 7th, 2020
Has to be approved yet..... Wait for it.... ????
Posted by The old git Git on Oct 7th, 2020
Deffo no change out of a Billion notes maybe even 1.25 billion.
Posted by Private Individual on Oct 7th, 2020
An absolutely disgraceful waste of taxpayers money. A lot of people are going to get very very rich from this, on top of the 70 million they have already stolen from the taxpayer.
Posted by Keith Marsh on Oct 8th, 2020
I very much doubt that any other community of under 100,000 souls would spend ONE BILLION POUNDS on a hospital. Has Jersey gone mad ?
Posted by Paul Troalic on Oct 9th, 2020
I guess there is little point in commenting as no one will listen.
It is an absolute travesty that in these tough economic and uncertain times we should even consider spending nearly £1b on a hospital. This can only be another vanity project.
The decision to spend this money should be left to the people of Jersey NOT the politicians.
We are all going to suffer this massive debt for years to come though this is really not the issue.
Surely someone can make a common sense decision on the size of hospital and amount that should be spent based on the population of the Island, This should be the deciding factor.
But what we don't know is how much money has already been committed and you can bet it's not inconsiderable and there's probably no way of stopping the gravy train now it's moving.
To place a comment please login Login »