WATCH: "We could see the flames... coming down towards us" 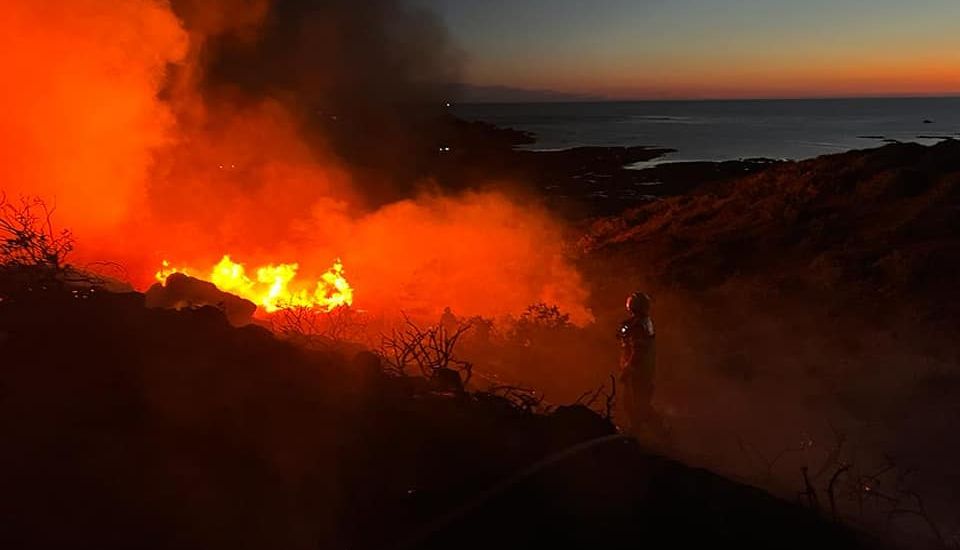 WATCH: "We could see the flames... coming down towards us"

Islanders living near headland where a major blaze broke out on Sunday have opened up about how they are living in fear of further wildfires amid warnings that the continued dry weather could bring more danger.

After receiving several 999 calls reporting a “large area of headland alight” around 21:00 on Sunday, the Fire and Rescue Service sent four of its White Watch team to La Pulente.

Soon after, four more arrived to tackle the fire, backed up by colleagues from the Ambulance Service who had been helping at another incident. 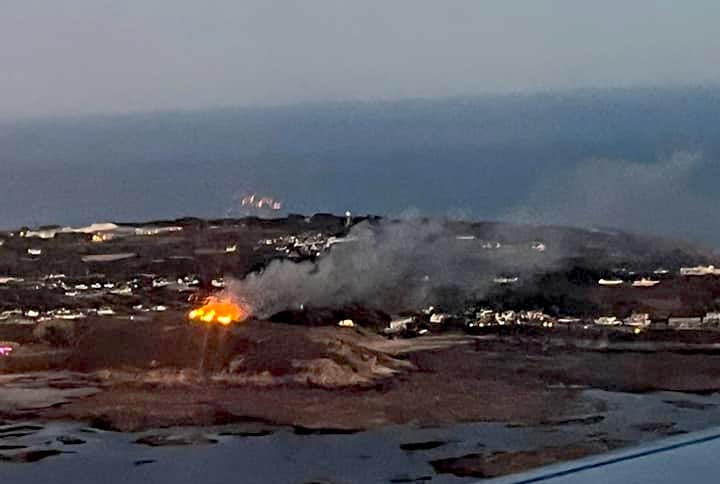 Pictured: The blaze could be seen from the sky.

At the height of the blaze, which could be seen from above, there were 15 firefighters, three engines and one water carrier tackling it.

"We have been worried"

Local resident Sharon Cox said: "Last summer we had a fire with a lad clearing away his portable barbecue into his van which went up in flames.

"The van hit our wall and ended up in the trees."

Since then, she said she and her family "have been worried about young people using the headland, especially with the very dry conditions" more recently.

"It's not really clear who is responsible for that area of land, but we think it is privately owned," Ms Cox added.

"My dogs were shaking with fear"

Her husband was out on the terrace of their house next to Seacrest Apartments, when he called her to "come quickly".

She explained: "We could see the flames on the flat surface at the top of the hill, coming down towards us.

"It was moving so quickly and we live in the closest house to the fire. My dogs were shaking with fear."

"Should we be packing our valuables into the car?"

Martha and her husband called 999, but struggled to get through as so many people were trying to alert the emergency services. They eventually got into contact with Police Headquarters, who informed them that the Fire Service were on their way. 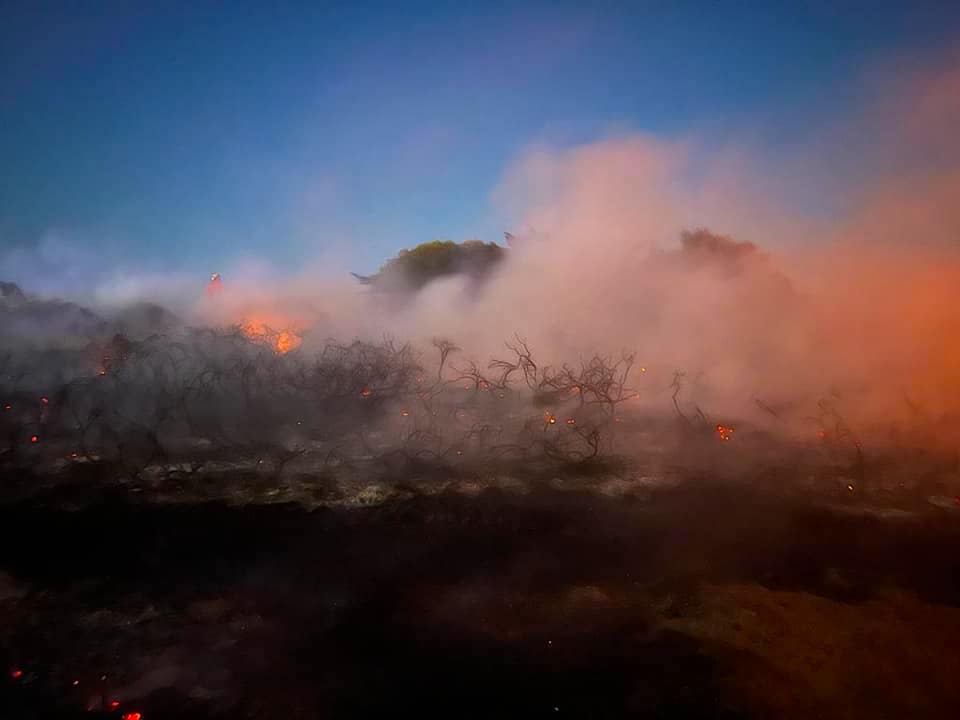 Pictured: At the height of the incident there were 15 firefighters, three engines and one water carrier tackling it.

Martha said: "It took about 20 minutes from us noticing the fire to the Emergency Services arriving. During that time, we just didn't know what to do. I was saying to my husband: 'Should we be packing our valuables into the car? Or getting ready to evacuate?'

"Eventually we decided to water the land boundaries around our house to try and slow the spread of the fire in case it did eventually get to us. Thankfully, the fire service managed to stop the blaze before it reached the field next to our house."

She added: "I have nothing but praise for the Fire Service."

Although the exact cause of the fire is still under investigation, a local petition has also been set up by resident Jono Hackett to ban the sale and use of disposable barbecues in public spaces. 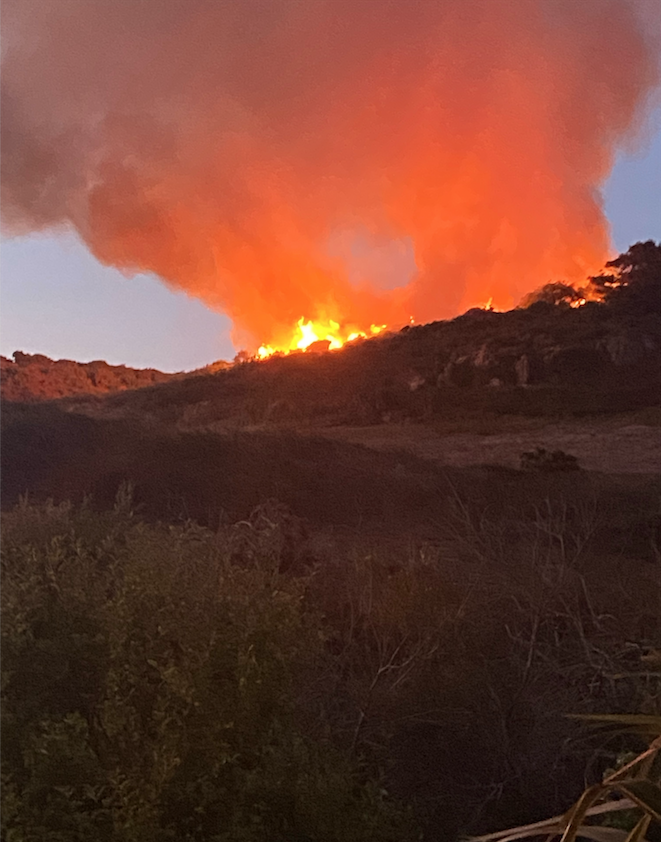 Pictured: The view from Martha's house as the fire was coming towards them.

The Fire Service is also urging islanders to take action to prevent wildfires in the island during the current hot weather and dry conditions.

They are requesting that people refrain from having bonfires, campfires or burning garden waste in the current conditions.

While not calling for Islanders to stop the use of barbecues, the service says it wants people to think very carefully about how they will avoid the risk of them causing a fire by, for example, keeping them far away from vegetation, including grass and, for disposable barbecues, cooling them thoroughly with water before throwing them in the bin.

Chief Fire Officer Paul Brown said: “We have lots of patches of gorse around Jersey which means these areas are especially at risk. With the amount of dry fuel currently and a breeze, any fire that takes hold has a good chance of growing rapidly into an incredibly significant blaze. 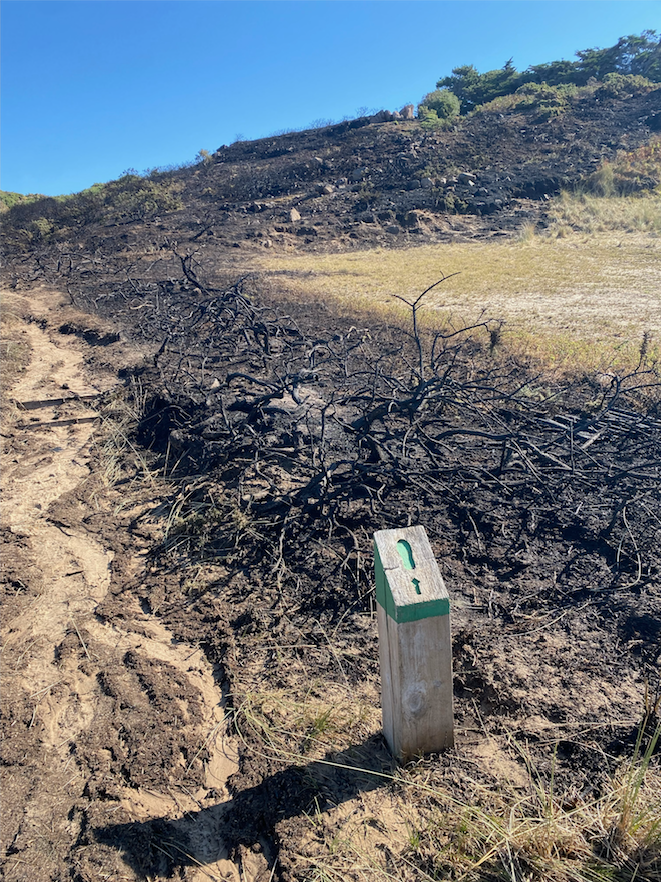 Pictured: The fire left the ground around Martha's house scorched.

"We really need the help of Islanders to help us reduce the risk. As well as taking your litter home with you, don’t smoke or use any naked flames near gorse or heathland. By following a few simple steps, we can all do our bit to protect nature and prevent fires.”

Posted by Private Individual on Aug 11th, 2022
It's really simple put a ban on all BBQs and bonfires in this hot weather.

Why anyone wants to burn rubbish and risk the lives of others is beyond me. Let alone the amount of air pollution bonfires cause and the stench of BBQ why do people feel the need to gas everyone out at this of year?

We need our windows open yet are bombarded every year by idiots burning garden waste in this hot weather and lighting fires.
To place a comment please login Login »

Fundraiser for family who lost home in fire