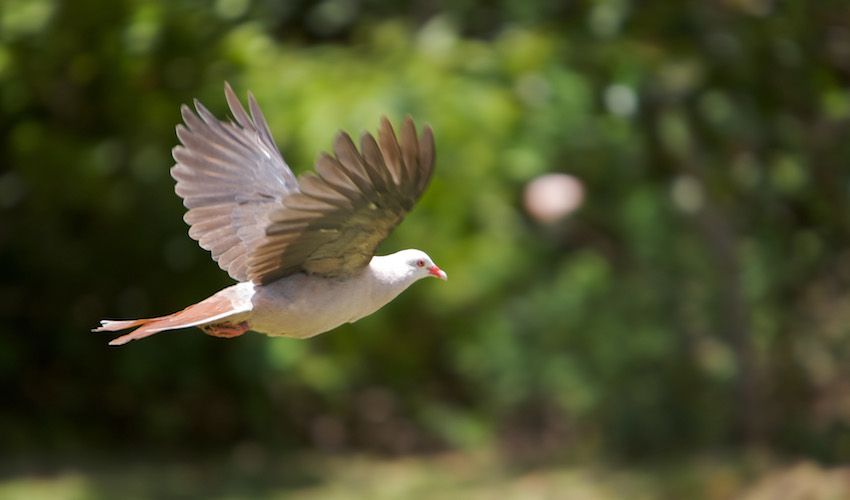 Jersey has played its part in saving what was once thought to be the rarest bird in the world.

Three pink pigeons bred at Jersey Zoo have been returned to their native Mauritius as part of a project to save the species once thought to be the rarest bird in the world.

Hailed as one of conservation’s biggest success stories, Jersey Zoo are following in their founder’s footsteps to save the pink pigeon after Gerald Durrell led the way in setting up the first ever captive breeding programme for the “precious” birds.

Back in the 1970s when Gerald first brought the pigeons back to Jersey, it was thought that there were only ten of the birds left in the wild due to deforestation and the introduction of non-indigenous predators to their habitat.

Now, three descendants of these same birds that were brought over to Jersey Zoo at this crisis point for the species are being returned to their native island home of Mauritius to join a breeding programme aiming to restore missing genes to the wild population.

Durrell’s Deputy Head of Birds Harriet Whitford, who accompanied the birds during their translocation to Mauritius, said: “Durrell has held this beautiful pigeon for 40 years and is incredibly proud to be returning these birds to ensure the genetic health, and survival of this enigmatic species in its homeland.

“This repatriation will hopefully be the first of many, and is an example of the vital role zoos can play in helping to prevent the extinction of a species.”

Currently, the population of pink pigeons is reported to be stable at around 470 individuals in the wild.

Conservation efforts have resulted in the species being down listed from ‘Endangered’ to ‘Vulnerable’ on the IUCN Red List of Threatened Species in 2018, meaning that the species is now considered to be at lower risk of extinction.

The birds bred in Jersey are being transferred to a different captive breeding programme in Mauritius to ensure that pink pigeon chicks have a greater genetic variability.

This will stand them good stead when they’re released to the wild as it helps maintain the health of the population by providing better protection against disease and pests as well as making the species more adaptable to environmental changes.

Vikash Tatayah, Conservation Director of the Mauritian Wildlife Foundation, added: "A study of the genome map of the species by the University of East Anglia showed a genetic diversity of about 8% that was not present in birds living in the wild; the local population was genetically impoverished.

Pictured: The birds were once regarded as one of the rarest in the world. (Jersey Zoo/Gregory Guida)

“With the repatriation of these birds, which have different genetics, we will be able to reinforce the generations to come. We are at a stage of conservation and rehabilitation of a threatened species rarely seen, even at the international level.”

Elaborating on the programme in Mauritius, Kevin Ruhomaun, Deputy Director of the National Parks and Conservation Service in Mauritius explained: “Once in Mauritian territory, the birds were quarantined for a period of three to four weeks in an aviary of Bras d'Eau National Park before being sent to the Gerald Durrell Endemic Wildlife Sanctuary in Black River for the needs of the breeding program.

"At the same time, Durrell and other zoos will continue to breed birds that will eventually be repatriated to Mauritius in the years to come."

The translocation of the pink pigeons, as well as Harriet Whitford’s travel to Mauritius, was kindly funded by a private donor and the Air Mauritius Foundation, which is committed to supporting other repatriations in the future.