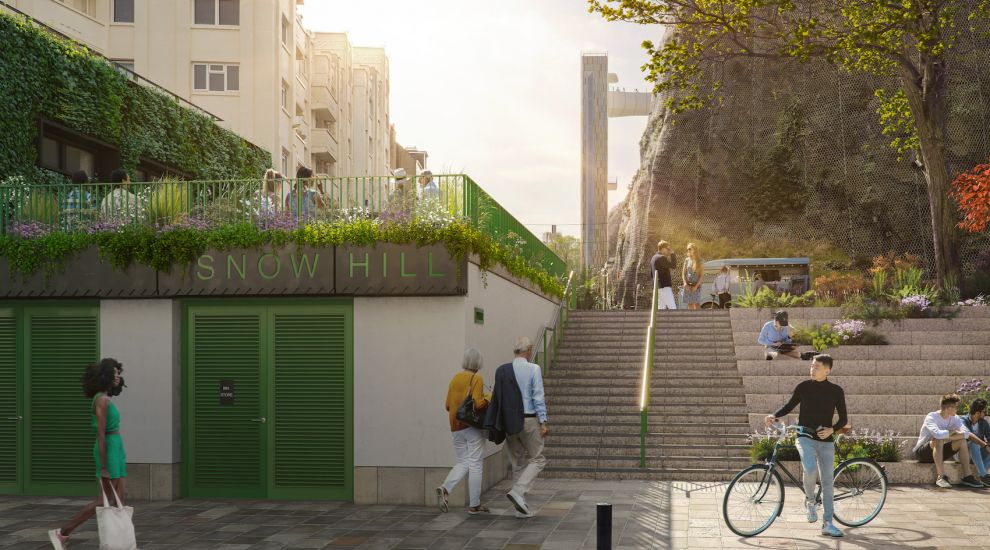 A new passenger lift and bridge connecting Snow Hill car park to Fort Regent could be constructed, and a leafy roof added to the nearby toilets, if Planning gives the project the green light.

The proposals, which include further improvements to the Hill Street and Snow Hill area, were drawn up by the States of Jersey Development Company on the request of Government and have now been submitted as a planning application.

If approved, the lift will be constructed next to the Stormwater Cavern’s entrance.

Other elements of the plans, which were overseen by landscape specialists Gillespies, include:

The taxi rank pick-up and drop-off point would be retained under the plans, while the motorcycle parking in the area would be moved to an undercover zone in Green Street car park. 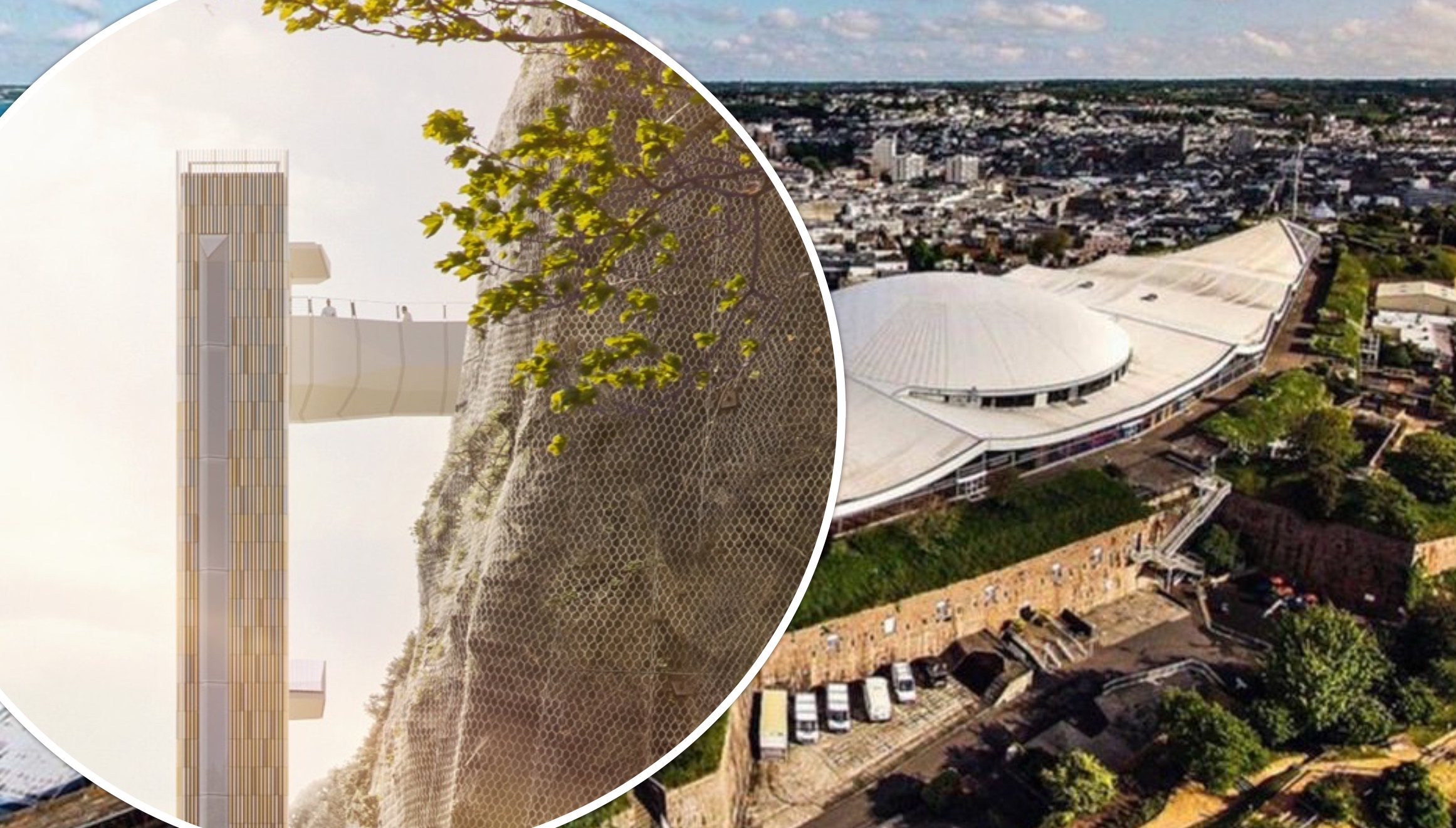 Pictured: The lift will allow islanders to travel directly to Fort Regent from Snow Hill.

Constable Simon Crowcroft has already thrown his weight behind the proposals.

“This offers an exciting opportunity for town residents and workers to easily access Fort Regent. The Fort is a valuable asset for St. Helier and enhancements to the external landscaping will coincide with the delivery of the lift,” he said.

The site was previously home to a cable car station was installed to transport visitors to the Fort. The cable cars were extremely popular and continued to operate from the 1970s until the late 1980s. 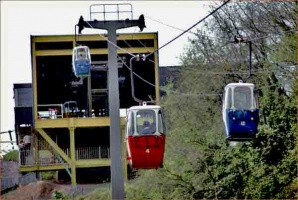 Pictured: The cable car service stopped in the late 1980s.

Discussions over access in the years that followed have since proven a key barrier to redeveloping the Fort.

Once the cable cars were scrapped, many complained of difficulties in accessing the leisure centre, with pedestrians having to either enter via a lift from Pier Road car park or walk up Mount Bingham.

In 2019, Socrates Architects floated similar proposals to create a lift on Hill Street and revamp the area joining La Motte Street and town. 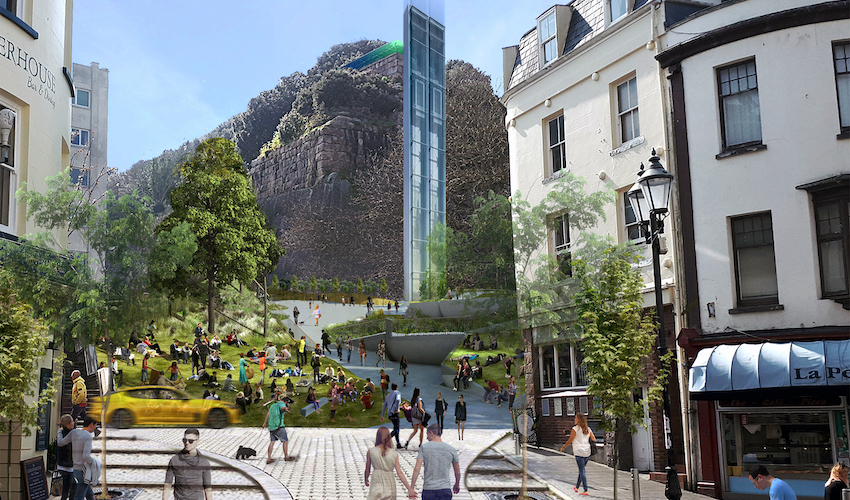 The States of Jersey Development Company said it did consider an entrance on Hill Street, but decided against due to the number of Listed buildings in the area and potential difficulties in stabilising the rockface in that area.

If the lift gets the go-ahead, it will be another step in the current Government's plan to regenerate the Fort.

Last month, work began on creating a 'walkway in the sky' around the Fort - accessible landscaped gardens around the Fort where islanders will be able to enjoy panoramic views of St. Helier.

Video: The Chief Minister and Infrastructure Minister pitching in to clear dead wood and make way for the 'walkway in the sky' last month.

Yet to be decided is what internal changes will take place under the 'Future Fort' plan, and the fate of the iconic dome roof.

A survey of islanders conducted last year suggested that an events/conference space capable of hosting between 500 and 2,500 people would be the most popular option. The concept of a 'leisure box', cinema and bowling alley was the next most popular idea.

Lowest in the rankings were plans for a casino and hotel.

What is known is that sport will be moved out of the Fort, in favour of upgrading and developing new facilities elsewhere. Last week, a £3m plan to update Oakfield sports centre was approved by the Planning Committee.

Chief Minister Senator John Le Fondré chairs the Regeneration Steering Group - a panel of politicians and senior civil servants tasked with oversight of and considering improvements to public buildings and the public realm - which asked the States of Jersey Development Company to bring forward the Fort Regent access plan.

“I am very pleased that a solution has been found to create pedestrian access from Snow Hill to Fort Regent," Senator Le Fondré said.

"This application is a major first step towards the Government’s commitment to regenerate Fort Regent and I am looking forward to the wider regeneration plans being developed later this year, following the appointment of the Master-planning design team.”

Posted by Guy de Faye on Feb 8th, 2022
I invite Express readers to contrast these latest plans with a proposal put to the Government of Jersey in January 2018.

The central concept was to maximise use of the Snow Hill Cut by constructing a multi-storey car park that linked to the Fort Regent rampart. The first floor had to be higher than normal to accommodate access to the Cavern, but this created the opportunity for an additional bus station on the ground floor that could provide sheltered parking for double decker buses, together with taxi facilities alongside.

Dedicated parking opportunities would be offered to Pier Road residents, to compensate for the change in outlook, which would be enhanced with "greening" of the new structure.

Access to the Fort would be via a series of escalators and travelators which, unlike lifts, can still be used in the event of mechanical breakdown. The entire scheme could be privately funded, with car park revenue paying for construction and maintenance, eventually leading to a steady revenue income. The intention was that all parking spaces would offer free battery charging.

Government of Jersey is currently recruiting a "Fort Regent Creative Development Team", but this process is now being bypassed by the Jersey Development Company "on the request of Government" - which could also translate as an expensive folly being orchestrated as a pre-election publicity gimmick by a handful of ministers. Kindly weigh the evidence!
Posted by Graham Nears on Feb 8th, 2022
And the reason for this is . . . ?
Posted by Scott Mills on Feb 8th, 2022
Election time, why when the fort is being dismantled to nothing, apart from the conference centre (so I've heard - YAWN!). Leafy roofs, garden furniture. That's it I'm definitely out of here, leaving the loonies to their tunes!!!
Posted by Bruce Willing on Feb 8th, 2022
If, and it is a big if, the illustrated lift is built, the top connecting route to the Fort must be enclosed to remove the suicide risk.
Posted by Austin Marsh on Feb 8th, 2022
What is the point there is nothing up the fort any more .idiots
Posted by Denise Shrives on Feb 8th, 2022
About time - please, just get on with it.
Posted by Keith Marsh on Feb 8th, 2022
Yet again, The Chief Minister is only happy when he is spending OUR money.
Such a folly, when the future of the fort is still unknown.
Time for an election and to get rid of ALL present ministers.
Posted by Danny Moisan on Feb 8th, 2022
Yawn! sorry I have been listening to the Fort Regent saga for too many decades now! is there an election coming? yawn.....
Posted by Scott Mills on Feb 8th, 2022
ps anyone hoping the election will bring in some brains and understand of the public must think again. Different faces...but as they say in asia....same,..same...but different (faces). Just look at the history of Jersey politics this century to understand this
Posted by John Dabs on Feb 9th, 2022
This won't be any ordinary lift, think Santa Justa.
To place a comment please login Login »