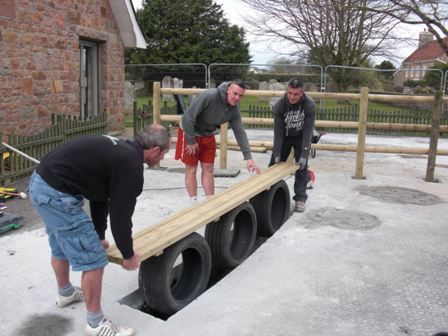 A Second Co-op Locale will be opening in St John in the next few weeks – but it will be on a much smaller scale than the Society’s other shops and only open for young shoppers.

Work has started to create the “mini play shop” which is part of a makeover for the popular playground in the centre of the village.

The Co-op have helped pay for the little shop and the rest of the playground is being funded and managed by the St John Youth & Community Trust. It’s their second project  – in 2010 they put in a skate park for teenagers on the site of an old tennis court at the recreation centre.

The play area in the church grounds had been in need of some “TLC” for a number of years so the trustees decided it was time to do something for younger children in the parish.

Chairman of the St John Youth & Community Trust Andrew Lewis said:  “We saw an opportunity in the heart of the village community to improve an already well-used facility.  It is with thanks to the generous donors comprising local businesses, charitable foundations, individuals and family trusts that we have managed to secure sufficient funds to make our vision a reality.”

A design was agreed with the help of a team from Romerils and the old playground is now being removed and levelled. It will take about two weeks to install the new flooring and the modern play equipment and should be open in time for the Easter holidays.

The St John Youth & Community Trust was set up five years ago in memory of Peter Larbalestier whose legacy provides recreational facilities for both young and old parishioners.

School to get 3G pitch on St. John field shared with new homes

Constables can now be removed immediately by court