“A poppy is not just for commemoration” 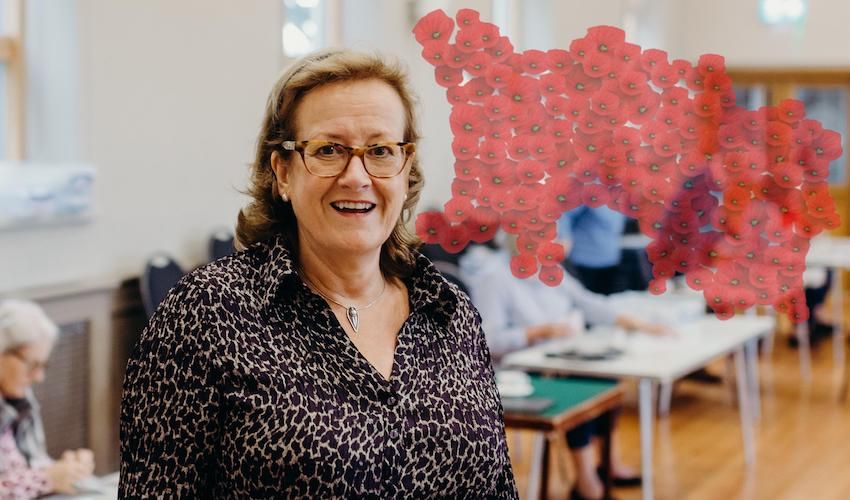 “A poppy is not just for commemoration”

The local poppy appeal organiser is encouraging islanders to buy their poppies ahead of Sunday to not only remember those lost in battle, but also support former servicemen and women.

Alison Opfermann says this year’s Poppy Appeal so far is down in terms of donations and sales of poppy pins, possibly due to bad weather and the distraction caused by the Rugby World Cup.

She explained that with a “tremendous year” in 2018 with the commemoration of the end of the First World War and the upcoming 75th anniversary of Jersey’s Liberation in 2020, the team expected 2019 – “the in-between year” – to be bit down. However, Mrs Opfermann says they have had “some huge challenges.”

“We didn’t get our supplies from the UK in time which was nothing to do with us,” she explained. “And then we did have the bit of a distraction, shall we say, of the Rugby World Cup, which was on both Saturdays when we would have normally expected to see the large numbers of people in town coming into the shop and buying the enamel pins, and the weather. And the weather’s still not playing ball!”

On the eve of Remembrance Sunday, she is appealing for the generosity of islanders and inviting them to buy a poppy pin if they haven’t had a chance yet.

There will a pop-up stand outside the main Boots on Queen Street between 10:00 and 16:00 today and the Picquet House-based shop will be open until 17:00.

Mrs Opfermann reminded that it is still relevant to buy poppy pins as they are not just for commemoration. “The money from the Poppy Appeal actually goes to support former servicemen and women who are encountering difficulties in their life now – either still in the services or out of the services retired – and they need all kinds of support,” she explained.

Local businesses have thrown their support behind the appeal, each in their own fashion. 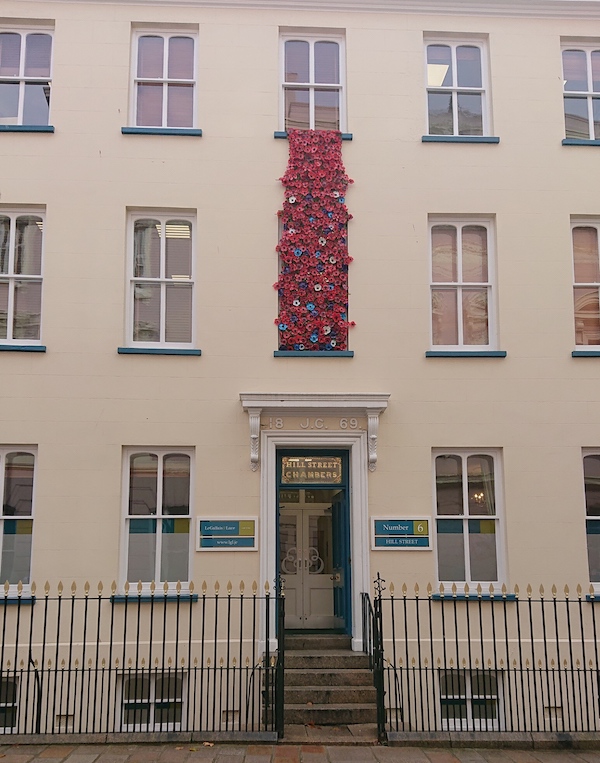 Inspired by the Women Institute’s display of plastic poppies at the Town Church last year, employees at Le Gallais and Luce have made their own outside their Hill Street offices.

Under the direction of Nicki Brittain, who works in the firm’s probate department, staff collected plastic bottles in April and then spent many evenings and lunchtimes to complete the over 350 plastic poppies that feature in the display.

As well the red poppies, Le Gallais and Luce have included purple ones to remember the animals lost during war efforts; white ones “to pay tribute to those who died in conflicts, but emphasising an ultimate commitment to peace,” and blue to pay tribute to the French nationals who lost loved ones during conflicts.

Ms Brittain also created necklaces, broaches and earrings which are being sold at the firm’s reception, with all proceeds going to the British Legion.

Meanwhile, Granite Products has added poppies to the livery of their brands new mixer.

Islanders are encouraged to post pictures of the mixer to the Royal British Legion - Jersey Facebook page. Simon Clowes, General Manager of Granite Products, has promised to provide an additional donation to the Poppy Appeal if over 100 people post their photos.

The Annual Remembrance Day Service and Parade will take place on Sunday (10 November) at the Cenotaph in the presence of His Excellency the Lieutenant-Governor Air Chief Marshal Sir Stephen Dalton, GCB, ADC, the Bailiff Tim Le Cocq, and the Deputy Chief Minister Senator Lyndon Farnham.

The ceremony will start at 11:00 with a gun salute and two-minute silence after which wreaths will be laid. A service led by the Dean of Jersey, the Very Reverend Mike Keirle, will follow, as well as a marching parade and a motorcycle ride-past.

Calls for ex-armed forces not to avoid seeking help