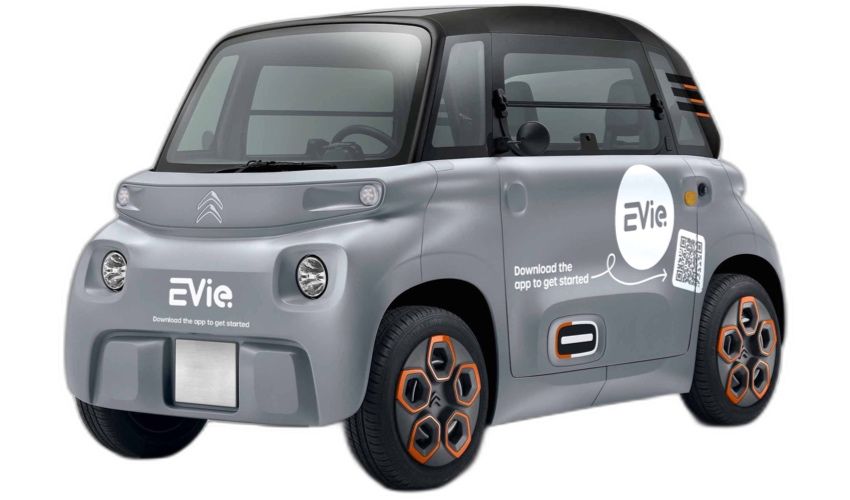 Official endorsement of car-sharing and possible Government funding is a “seminal moment” for green transport business Evie, its founder has said.

This week, Infrastructure Minister Tom Binet said that taxpayers may invest or take a stake in Evie to encourage people to share vehicles rather than owning one that sits in a space for most of the time.

His announcement coincided with the arrival of a new addition to the Evie fleet: a small twin-seat electric quadricycle made by Citroen called the Ami.

The firm has brought 12 Amis to the island. It hopes to expand this to 100 – allowing people to make single journeys around the island, as they can with Evie bikes.

“If we can deploy more cars, which makes them easier to find and drop off, it is a virtuous circle; more people will use them because they are easier to find.

“At the moment, if you pick up one of our electric cars from opposite the bus station, you have to drop it back there.

The arrival of the first Amis is a small step on the way to a new business model, which introduces A-to-B travel. This could mean, for instance, hiring a car to drive to the Airport and leaving it there; or picking one up at the Airport when you arrive, using the app to check availability.”

Mr Breeze said that there were many advantages to car-sharing.

“Cars spend 96% of their lives doing nothing, so they tend to be very expensive under-utilised assets,” he said. “They need somewhere to go – and transport planners have worked out that each car needs 3-5 spaces to make it useful.

“The Government plan for another 7,000 residential units by the end of the decade. The current ratio is 1 unit to 0.7 parking spaces so that is almost 5,000 additional vehicles arriving in Jersey, based on each space being filled.

“And if you need 3-5 parking spaces per car to make it worthwhile, that is an awful lot of additional parking.

“If, however, with car-sharing you reduce that ration from 0.7 to, say, 0.2 spaces per residential unit, that is a significant reduction.

“It will drive through the change in behaviour which we are seeing in many European cities.”

He said: “There is a natural marriage between us and Andium: they have under-utilised spaces in some of their developments and we can provide the cars which can fill those spaces and be shared by residents.

“We are renting spaces off Andium where we believe there will be demand.

“Andium is also committed to add charging points to every space and how they prioritise that roll-out is driven by where we think the demand will be.

“Our relationship with Andium is extraordinarily positive and without it, it would certainly be more on an uphill battle to promote car-sharing and zero-carbon travel.”

Posted by SimonBevens28 on Nov 20th, 2022
Perhaps put some at parish halls for those who don't live in town. This is a really good idea, I will gladly get rid of my car as I rarely use it now I work from home. Perfect for Jersey!
Posted by Private Individual on Nov 21st, 2022
Absolute garbage, I do not wish to share any space with someone who may have an infectious disease such as covid!

These people are really deluded if they think the majority of people are going to give up their BMW's and Audi's to drive a poxy junk electric car.

Taxpayers money should not be used to prop up a failing private company.
To place a comment please login Login »

Filling in St Ouen's Bay quarry with waste will be "delicate"