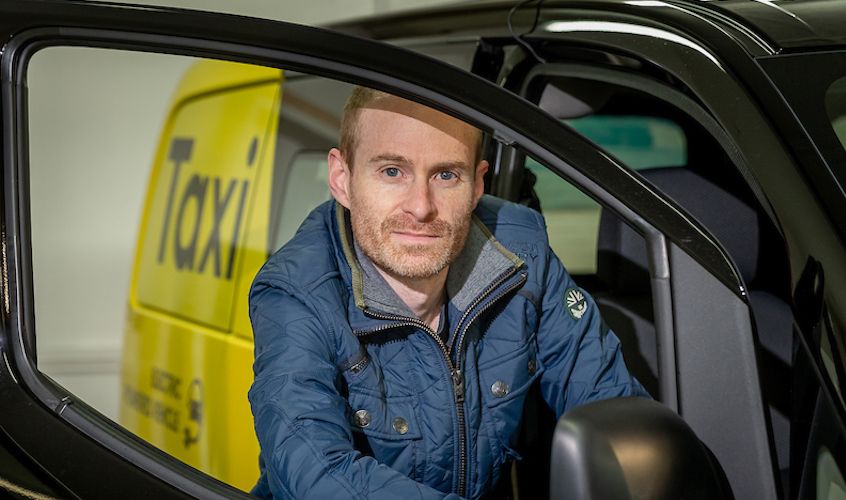 Protecting clients from too much risk is key to this local hedge fund manager's day job. But he's putting that caution to one side as he delves into the taxi business.

It’s been a difficult year for those working service industries. As the covid rules have changed to allow more interaction, some businesses have seen a return to similar levels of activity before lockdown.

Taxis have kept going, although business levels may take time to return to what they were - so why is a company more associated with a ‘carback’ service, now branching out into that sector?

Alex Morgan, the director and one of the main shareholders of Home James, explained his plans to Express... 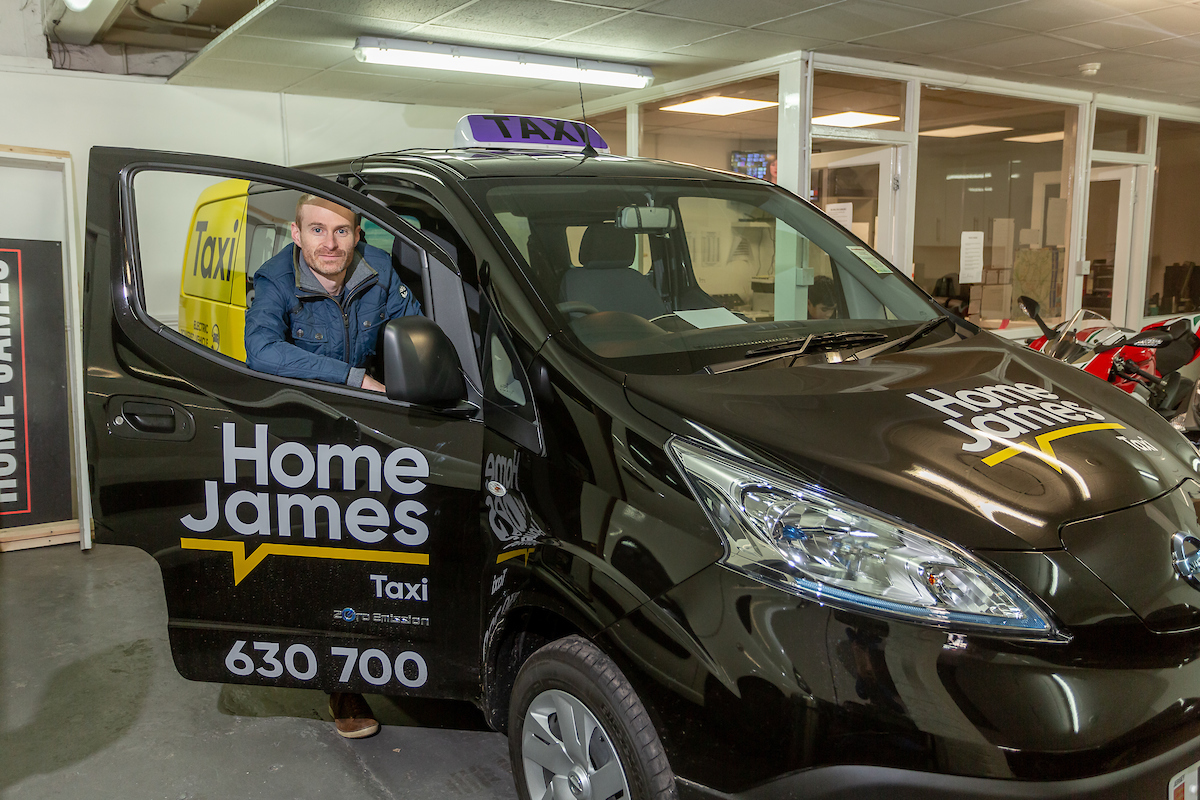 Pictured: Alex's day job as a hedge fund manager allows him to pursue other projects, including his latest venture with Home James.

It was a chance encounter in La Paz, the capital of Bolivia, that prompted Alex Morgan to leave his native Tasmania where he’d been helping his father run a bookshop. He was no stranger to being in one place, and then another, having lived in Singapore and Brunei as a child. His parents were teachers and liked to combine their jobs with travel.

His move here came about during a trip in South America where he had joined the same tour in a converted army truck that his now wife Natacha, was on. She was from Jersey, and as Alex had been a fan of Gerald Durrell in his youth, they started talking.

“The problem with Tasmania is it’s very beautiful, but it’s a long, long way away from anywhere where anything’s actually happening. I was looking for some kind of career, this was post-university days, and I kind of hijacked her world trip and convinced her to let me come back to Jersey.”

At university he had studied economics and arts, the Australian equivalent of humanities. That included studying Japanese and Mandarin and spending time in China which helped him improve his language skills. In Australia they learn Indonesian, Japanese and Mandarin in school because they are more useful than French, German and Spanish. 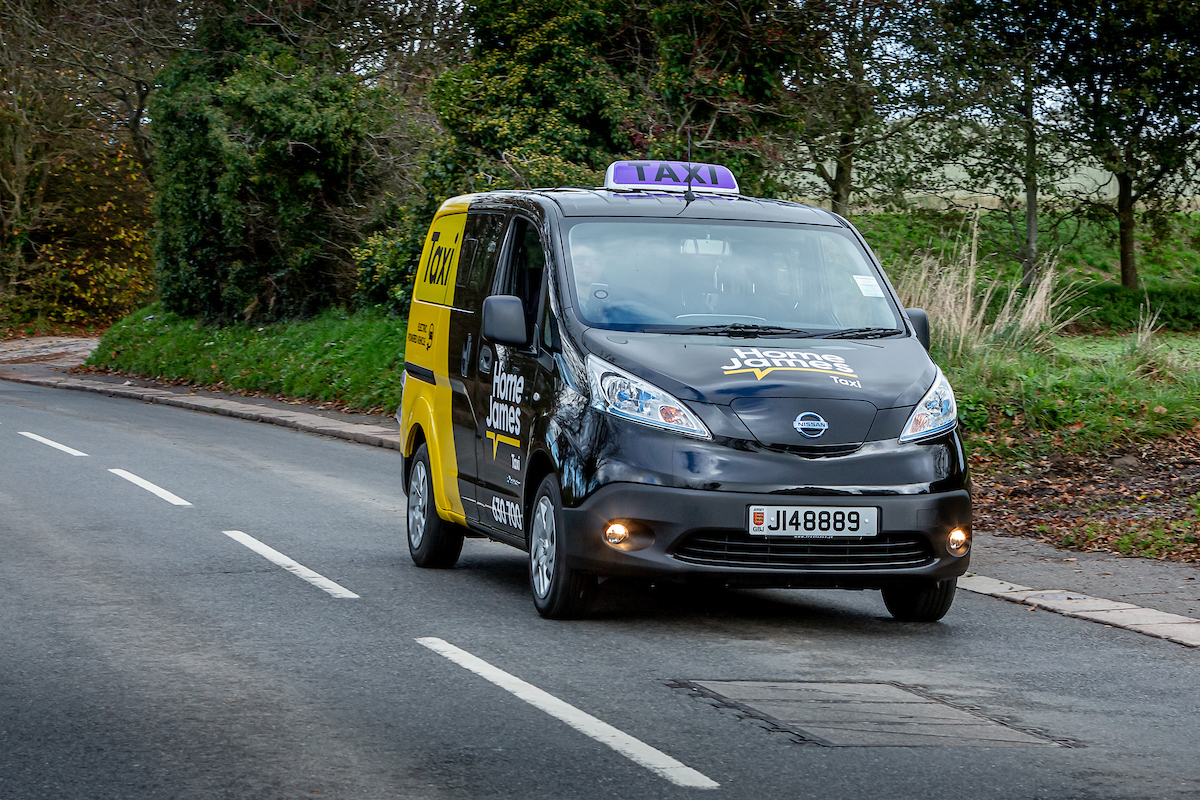 Pictured: Alex moved to Jersey after meeting his now wife Natacha on trip in South America.

“You haven’t got that European cultural and lingual introduction, but you can get your head around them, and Japanese and Chinese share a lot of the same characters in their script, but even though the pronunciation will be totally different, the meanings of the actual characters are the same. I find them fascinating, just a totally different way of speaking and thinking. But I felt apart from doing something at university out of interest, I needed to be able to establish a career, so I did economics as well.”

And although he has fewer opportunities to practice his languages, Jersey has been a good base to get established. Falling into accountancy helped Alex understand the mechanics of business and showed him how to avoid some basic errors. When he and his father bought the bookshop, an existing business, they made a fundamental mistake.

“We gave the financial statements to our accountant to review for us. He said it looked fine and then about six months later, a real schoolboy error, we realised the owners who both worked full time in the business had not been posting their salaries as expenses. If they had, it would’ve been a loss-making entity rather than a profit-making one. I now know that it’s a classic trick people use when selling their business which we didn’t realise at the time. Had we known, we may not have bought it, certainly not for the price we paid. That hit home quite hard that there is so much that can be hidden away in these books.”

Alex moved from accountancy to hedge fund management and for four days a week is the Chief Operating Officer at Perdurance Asset Management. It gives him the freedom to pursue other projects and was involved in a start-up business that was eventually sold to Nasdaq. 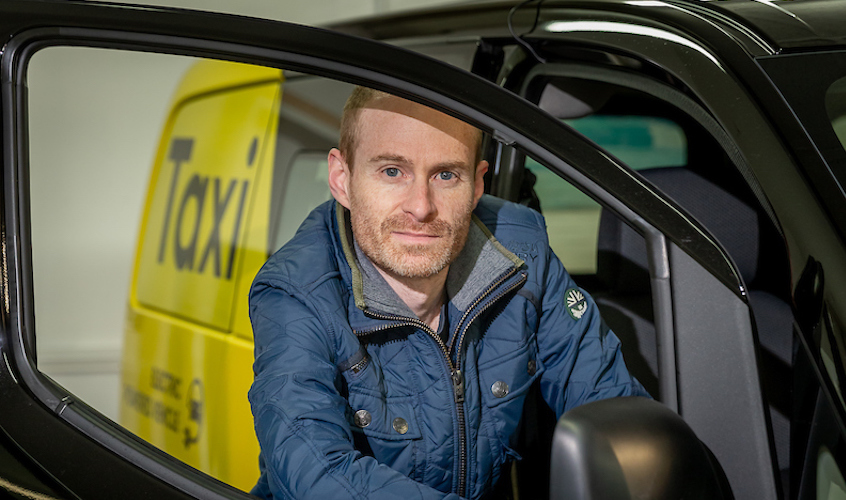 Pictured: Alex could see how there were ways to develop the car valeting company, including launching a taxi service.

He looked through the Lakey offshore website for businesses for sale, looking for ones that interest him. That’s when he saw Home James pop up. Not knowing anything about the business other than it seemed to be doing well, and he could see how there were different ways to develop it.

“The guy who helped to run it was a fabulous guy called Miguel Pereira and he was really energetic and entrepreneurially minded, and I thought we could make a good team. So, I went for it and we have gradually been dipping our toes into trying different things.”

They started offering mobile car valeting in 2017 and as that expanded, they decided to look at taxis. Home James already had a booking service that has staff answering calls, but some might see launching a taxi service during a global pandemic as risky.

“We felt the time was right now because so many people are battening down the hatches just trying to survive; when you are launching something new you don’t expect to be massively busy on day one. So maybe this is the way to softly dip your toe and figure out how it works and gradually get started and be someone positive who is trying to grow something and employ people during tough times.”

The government agency DVS, he says, want to see more taxis on the roads and have been helpful. And, with an average age in the industry in the region of 60 plus, there is an opportunity to bring that down and make it more of a career.

“Our drivers with Carback tend to be younger with families. They are doing it as a second job, or even as a third job. I think for some of them if they could see there is a way to gradually build up their island knowledge and kind of graduate into taxis then that’s a way for them to build a career as well. We are happy to help be part of that, and the other thing we want to be part of is the move to electric vehicles.” 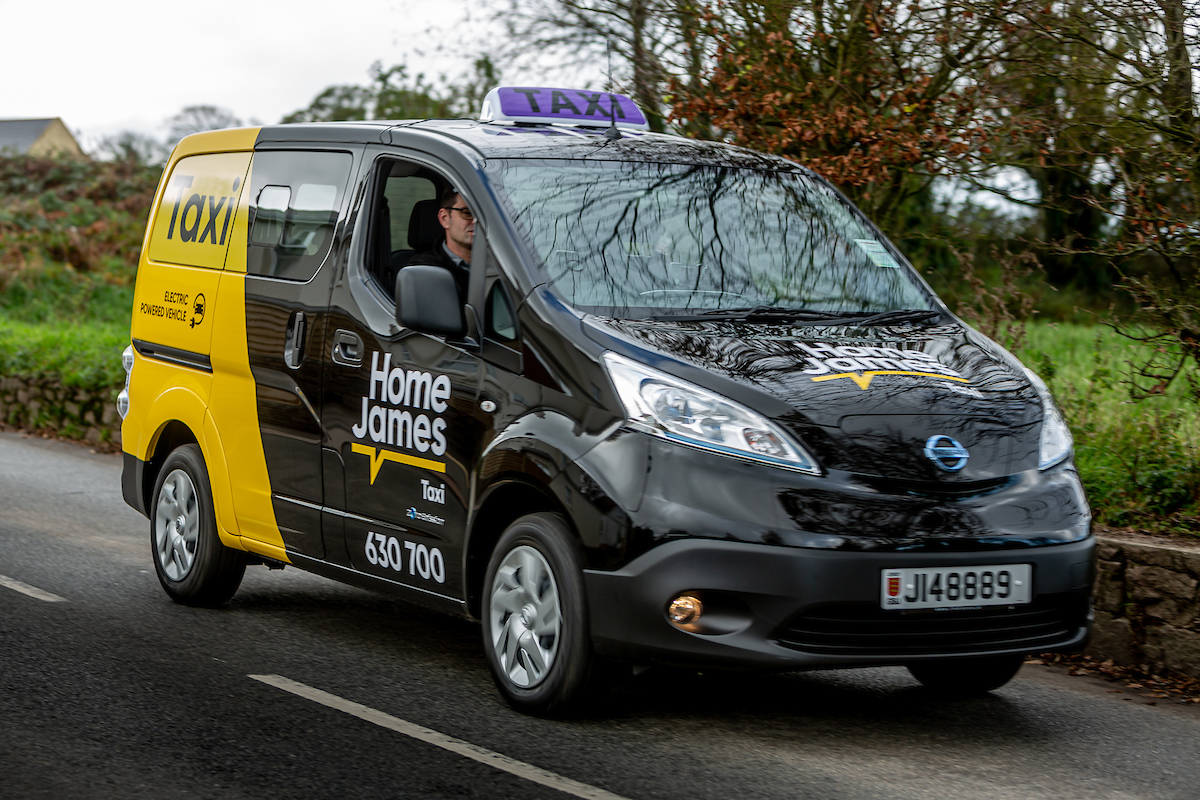 Pictured: The entrepreneur, who worked with start-up EVie, wants to move towards electric vehicles.

The first company vehicle under the Home James banner will be all electric. Alex worked with EVie when it was getting off the ground and with the general move towards electric vehicles, why not taxis?

“Our idea is just to build up a little pool of drivers, some initial customers and understand how it works so that when we come out the other side, drivers who were more reluctant will see that we’re up and running. The other side is we want to start up an academy and go to some of the school careers fairs and say, ‘have you thought about taxi driving as a career?’ That will get more younger people into it and change the whole flow.

“It feels to me like it’s ripe for disruption and that’s what we like to do. Younger, newer vehicles, more customer-focused service, we’ll see what we can do.”

There are lots of ideas for taking the business forward. In the ‘carback’ service there is a pool of 30 to 50 drivers which fluctuates through the year. In the taxi side of the business there are four self-employed drivers who work when they choose to, plus one other who’ll drive the six-seater company taxi.

And Alex, who likes to understand a business from the inside, is no stranger to taking his turn behind the wheel.

“I quite like to get involved just to understand, because it’s very hard to strategise and develop a business if you don’t actually know how it mechanically works. What is it like for a driver when you turn up at a house party and you can’t find the person who ordered the vehicle, or you’re up at the Trinity Showground and there’s 50 cars and taxis trying to get out at the same time. No one can move and it’s pouring with rain. You can empathise much more, and actually it’s fun.”

And this seems to be typical of someone who likes to keep busy. I ask whether there’s still that underlying wish to pack up and head off around the world again, and Alex says that hasn’t fully gone away, even though he and his family are very much settled in Jersey.  But it’s not necessarily a geographical change that he’s after. 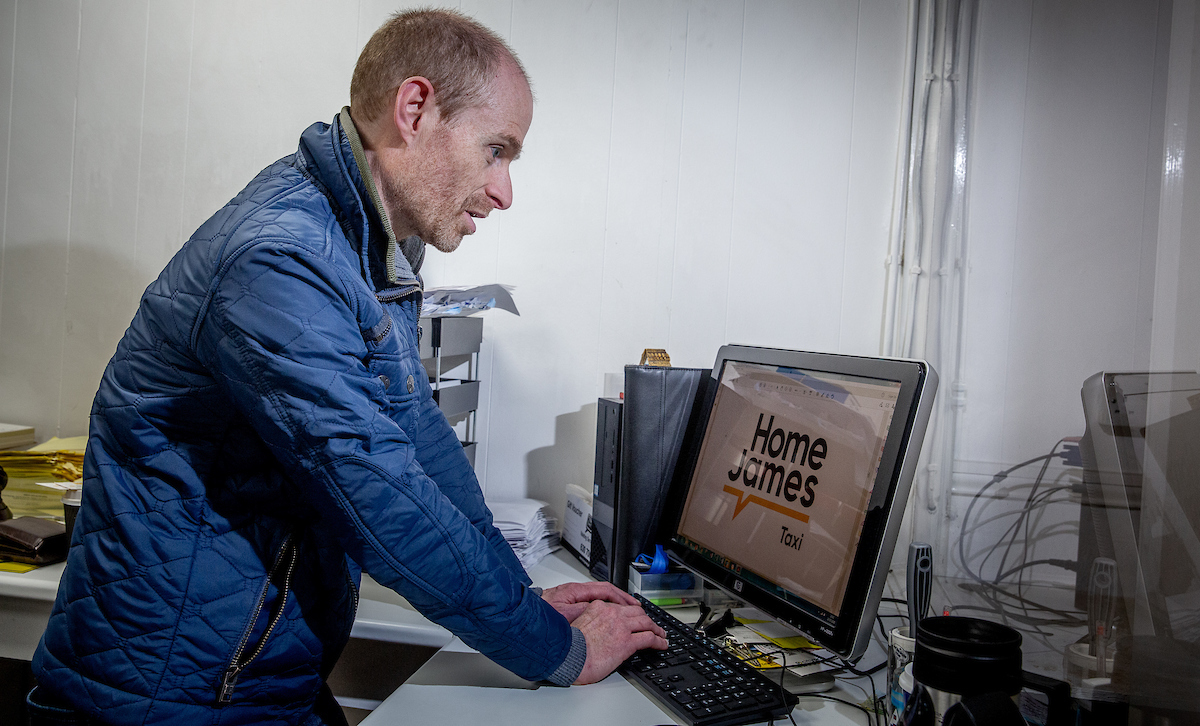 Pictured: Working with Home James gives Alex the opportunity to take risks, something he needs to rein in for his day job.

“I like to have lots of things on the go. The thing that terrifies me the most is that in ten years' time I could still be buying my lunch in the same sandwich bar. I like the idea that each morning I don’t really know what’s going to happen. Hedge funds are great for keeping the lights on and paying the bills, and it is intellectually interesting work. But with something like Home James, because we are trying to start new businesses and because it’s an area I’m not quite familiar with, it throws up all kinds of challenges, from HR to dealing with government departments, all sorts of things I would not otherwise have exposure to.”

And talking of exposure, as a hedge fund manager in his other job Alex is looking after other people’s money and assets in an industry that is very much about not exposing clients to too much risk. But as an entrepreneur looking after his own business interests, he has to put aside some of that caution.

“Instinctively I’m more entrepreneurial and I’m much more a risk-taker for myself. That’s one of the reasons why I like to do these projects because it’s an outlet for risk taking. But it’s not just roll the dice. You have a plan; you have a strategy and you go for it.

“In the hedge fund world everything is very much structured and monitored so that you protect your investors' money. And that’s fine because it satisfies the disciplined side of my brain, the accountant for whom every penny has to be accounted for. But the exciting part is taking the risk and the risk that something might fail. Not everything has worked and lots of things I’ve looked at I've rejected because they don’t add up.”

And that entrepreneurial spirit that is tempered by good business sense goes back to the days when at university, Alex ran a sweet stall with a friend back in Hobart’s Salamanca Market. He made enough from that venture to buy his first house.

“It’s fun,” he explained. “Let’s see if we can create something from nothing and if it doesn’t work you do something else.”

This article first appeared in Connect Magazine. Read it in full HERE.