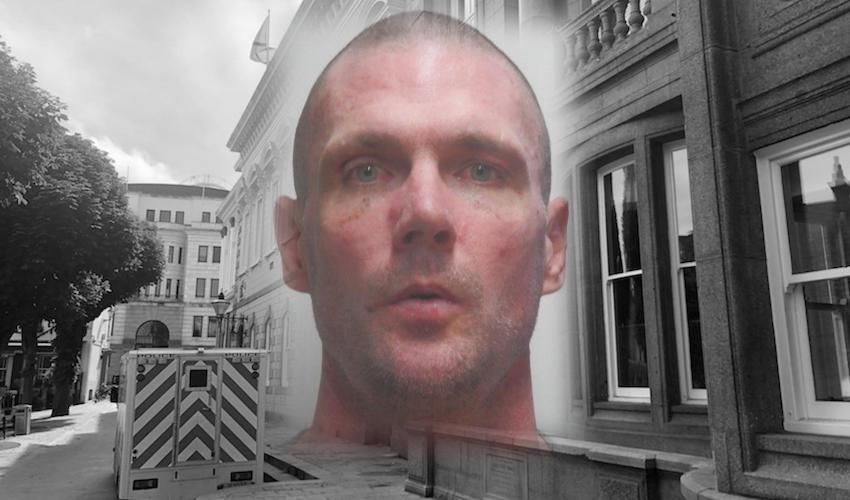 A 41-year-old man convicted of raping and sexually assaulting a woman in a local hotel has been put behind bars for seven-and-a-half years.

Brett Kean will also be indefinitely restricted from contact with his victim by a restraining order.

His sentence came yesterday, after he was convicted of one count of rape and two charges of sexual assault after he attacked and stalked a woman at the Hotel Sandranne in 2016.

Kean has always denied the charges, insisting that the contact was consensual, even throughout a four-day jury trial in the Royal Court which ultimately reached the unanimous decision that he was guilty on all counts.

Video: Brett Kean leaving the Royal Court on another occasion.

Now, he has been put on the Sex Offenders’ Register for a minimum of 10 years and will indefinitely be prevented from contact with his victim – whom he harassed on the phone and in person in the days leading up to the attacks.

Throughout the course of the trial, the Court heard testimony from Kean’s victim – only referred to as Miss X to protect her identity – who recalled how her rapist had made “disgusting” comments after he had assaulted her.

She broke down briefly after telling the jury that Kean had said, whilst girls always tell men to ‘stop’, there was no need to until they began to scream.

Pictured: The rape and sexual assaults took place at the Hotel Sandranne in 2016.

At his sentencing, the Solicitor General Mark Temple appeared for the Crown and Advocate Francesca Pinel represented Kean.

The Police say that they “are committed to investigating these crimes and bringing the offenders before the courts to face justice” and that they have “specially trained officers who can help victims of sexual abuse through the traumatic process of disclosure and also reassure them that help and support is available from a number of agencies who offer guidance through the various stages of the criminal justice programme.”

Kean was taken back into custody to begin his sentence.