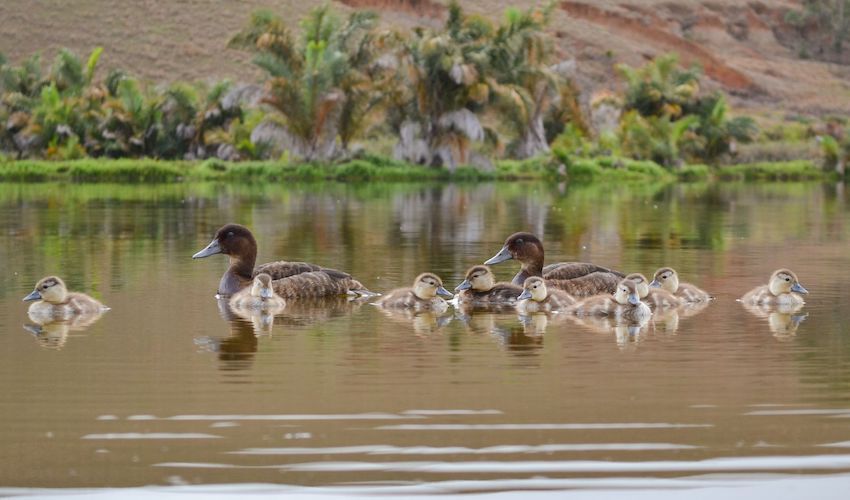 A mission save the world’s rarest duck has hatched success much earlier than expected, as the birds bred at Jersey Zoo have gone on to have their own ducklings in the wild.

The Madagascar pochard duck, once thought to be extinct until a chance discovery of the last remaining birds kickstarted a breeding programme in the hopes that the critically endangered species could be saved.

After the release of 21 captive-bred pochards by a team of conservationists from Durrell and the Wildfowl & Wetlands Trust (WWT), a dozen ducklings have been spotted on a remote lake in northern Madagascar – marking the first step in re-establishing a population of the ducks in the wild.

The ducklings are made up of two broods – one of eight and one of four – and their discovery has defied expectations as diving ducks normally breed for the first time at a later stage in life.

The world’s rarest duck has bred in the wild

12 Madagascar pochard ducklings have been sighted on Lake Sofia, where 21 captive-bred ducks were released just a year earlier!

Commenting on the unexpected find, Durrell’s Wetlands Manager Felix Razafindrajao, who was part of the team that first discovered the ducklings, said: “I am happy and proud, as well as a little surprised, that our released birds have produced ducklings within one year.

“Despite the release techniques being a world- first, it’s clear that our methods and the careful preparation and planning have worked to save the ‘Fotsimaso’. After much hands-on effort to rear birds in captivity, and to transport and release them at this remote location, it’s fantastic to see the ducks take this next critical step for themselves.”

WWT’s Project Manager Peter Cranswick added: “Reintroduced animals normally take a while to settle into their new site, and first breeding attempts are often unsuccessful, so this is a wholly unexpected but very welcome development.

Pictured: The ducklings have been spotted on the lake far earlier than expected. (Durrell Madagascar)

Although the little feathery bundles are a promising sign for the species, conservationists note that the young still have many challenges to overcome – including finding food in a lake that’s in such poor condition.

A monitoring team that was initially based at the lake in 2018 to track the released pochards over the last year will now be observing the ducklings.

Already, they have been observed taking artificial food provided on feeding platforms by project staff. With cyclone season underway, it is crucial that the birds grow and develop their first full feathers that will provide waterproofing and warmth as the weather deteriorates over the coming month.

A multi-agency partnership has been working to improve the condition of Lake Sofia to give the ducks, other wildlife the best chance in life, as well as ensuring it provides for the local communities that depend on it.

Pictured: The ducklings are being closely monitored to ensure they have the best chance at survival. (Durrell Madagascar)

Durrell’s Project Manager, Dr Glyn Young said: “This is a remarkable step in this project to save and restore the Madagascar pochard. When we started in 1989 and found no hope for the species’ survival until 2006, things looked very bleak.

“But we never gave up and I am so proud on behalf of our partnership and for all of our Malagasy colleagues that this pivotal milestone offers hope that the pochard may one day be widespread across Madagascar’s wetlands.”