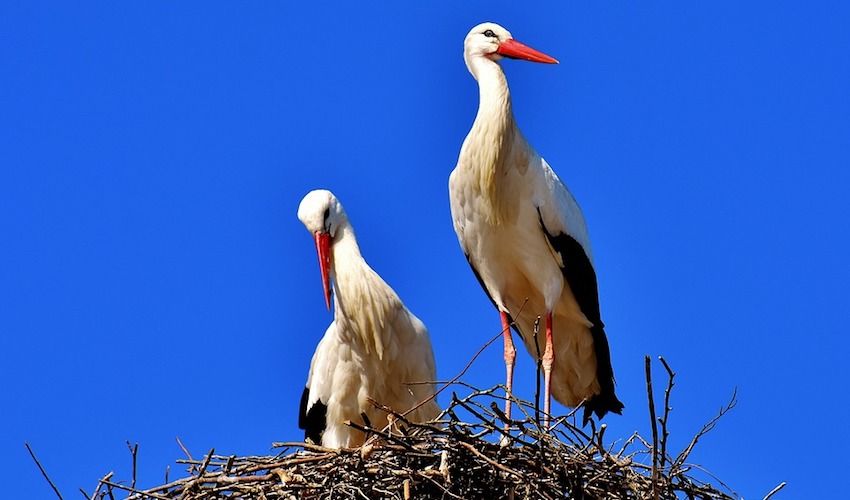 From far-flung archipelagos to the top of an oak tree in Sussex… Jersey Zoo’s latest conservation mission to encourage an endangered British bird to nest for the first time since the Civil War has ‘beaked’ conservationists’ interest.

Working as a key partner in the project to help re-establish a breeding population of White Storks in their native home of Southern England, Durrell – along with a number of private landowners and other conservation organisations – are waiting with baited breath after a nesting pair were spotted on the Knepp Estate in West Sussex.

The lovebirds are certainly the ‘stork’ of the town, and the country, with national efforts in place to ensure that their chicks manage to fledge – making their pairing the first successful nest in Southern England since the end of the Civil War.

The White Stork Project is a partnership of private landowners and nature conservation charities, including Durrell, which aims to restore a population of at least 50 breeding pairs to southern England by 2030.

Pictured: If the chicks manage to fledge, it will be the first successful nest in South England since the Civil War.

The project aims to give the species a helping hand with a phased release programme over the next five years to share the ‘bird-en’ of repopulating Britain with storks.

At least 250 white storks will be released at several sites in Sussex and surrounding counties, and the first releases aimed at establishing local breeding populations, as seen for the first time at Knepp this year, have already taken place. They will be supplemented in late summer each year by the release of captive-bred juvenile storks reared at Cotswold Wildlife Park.

The success of the project is being monitored by Durrell which is also working with the local communities around the release sites. The zoo’s Project Officer Lucy Groves will be watching the top of the Knepp Estate oak with particular interest: “It’s a real privilege to watch and follow the behaviours of these charismatic birds, particularly the nesting.

Pictured: Durrell's conservation mission began through the work of Gerald Durrell who established the zoo 60 years ago.

“I am excited to work with the local community as I believe these beautiful birds will really capture the public’s imagination and hopefully become a positive symbol that there is hope for the natural world,” she said.

It is not clear why the large birds failed to survive in their native British Isles, but it is thought that a combination of habitat loss and over-hunting led to their decline. It is also speculated that, due to their being symbolically associated with the rebellion during the Civil War, the species was targeted and persecuted.

The owners of Knepp Estate Charlie Burrell and Isabella Tree said they are hopeful the breeding pair on their land will prove a good omen for the rest of the programme.

Charlie observed: “We are thrilled to see these wonderful birds starting to nest in Sussex once again. A raft of recent reports have brought into stark focus how close we are to ecological collapse, but there is still hope. Projects like the rewilding of Knepp show that when allowed to do so, nature can heal itself.”

Video: The Knepp Estate was former farmland which has been actively 'rewilded' to protect natural species. (Youtube/Knepp Estate)

Isabella added: “For centuries the stork has been used as a symbol of rebirth and renewal, and we hope its return to Britain will help kick-start a movement for the wider restoration of nature.”

In addition to the Knepp Estate, Durrell are working with the Cotswold Wildlife Park and reintroduction experts the Roy Dennis Wildlife Foundation. Other release sites include Wadhurst Park in Sussex and Wintershall Estate in Surrey.