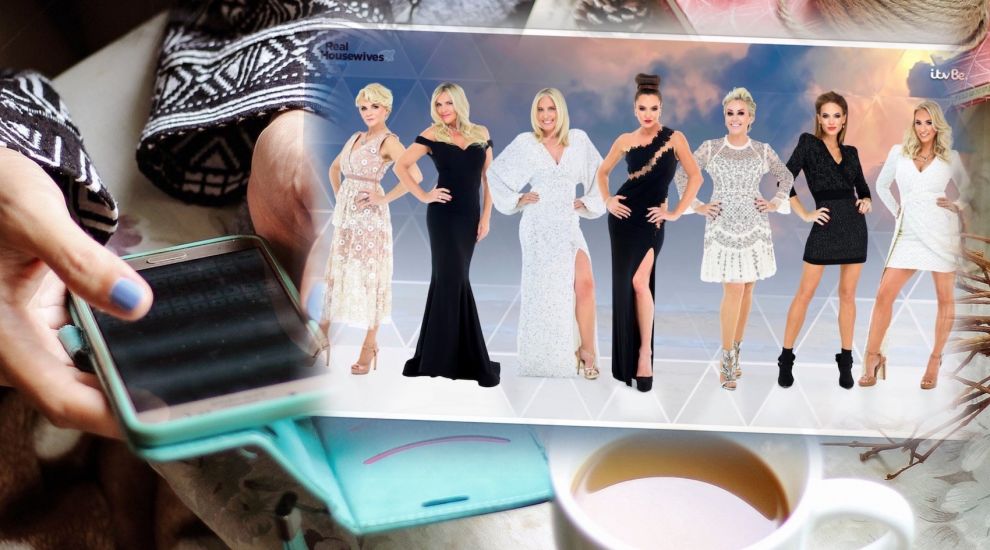 National promotion for Jersey, some harmless fun between Christmas and New Year...or an example of 'trash tv' at its worst?

Last night the 10 episodes of ‘The Real Housewives of Jersey’ premiered on ITVBe and ITVHub.

Commissioned by ITVBe and produced by Monkey Kingdom, the ‘structured reality’ show was filmed in the island in August.

As might be expected the reaction on social media was...mixed, with some praising the scenic shots of Jersey - and others lamenting the portrayal of the island as just a playground for the 'rich and shameless.'

So happy my aerial shots are getting such great feedback! Thanks everyone ????@RHOJersey @VisitJerseyCI #RHOJersey

The first episode opened on a series of aerial shots captured by local photographer Marc Le Cornu, also known as Bam Perspectives. Jersey was described as “awash with glamour, glitz and plenty of gossip” with the voiceover noting that “what it lacks in size it makes up for in attitude."

Dr Hartmann could also be heard praising the island’s rich culture and heritage and comparing the island to a mix between Ibiza and Menorca.

The series had been the subject of much speculation and comments online, with many questioning whether it would be beneficial for the island.

A lot of the comments light-heartedly made fun of the show and how heavily scripted it is.

@FoodieScottish wrote how it was so bad they couldn’t stop watching.

#RHOJersey is so bad it’s good. Who would have thought there would be a Scottish Kris Jenner wannabe pic.twitter.com/AkIpEyH6be

So, self isolation has meant I completed #RHOJersey in two days. Never heard such commotion about what happened in a graveside in Australia in the 90s.

@SamF_H from London, who finished watching the show in two days due to being isolation, pointed out he had never heard “such commotion about what happened in a graveside in Australia in the 90s”.

#RHOJersey I’m sorry all this is giving me is #WishYouWereHere 90’s vibe... pic.twitter.com/H3hiy9bpFH

Not everyone seemed to enjoy the new series though with someone pointing out they hadn’t seen “anything so laughably awful in ages”.

I think the fact that Jersey is back to front really foreshadows what this series is gonna be like... #realhousewivesofjersey #RHOJersey pic.twitter.com/yP6tUUb6E4

Local musician Alfie Butel however said that the “back to front” logo should have been a warning.

@pepper6012 said she had got bored seven minutes in due to the show being “overproduced”.

According to writer and musician Jonathan Socrates, the Real Housewives rank just behind Brexit and Covid – we are not sure what the ranking is but we don’t think it is ‘The best things to happen in 2020’.

#RHOJersey how are they a housewife with no husband haha

Some jokingly pointed out the inaccuracies in the show, like @NiicolRogers90 who asked ‘how are they a housewife with no husband?’.

#RHOJersey oh dear... to make it more accurate they should of had an episode where they went to the Water Splash, a bit of shopping in Marks & Spencer and then to KFC for a bargain bucket.

Meanwhile Jon, @JFDT29, made some suggestions to make the series more realistic, which involved an outing to the Watersplash, shopping at Marks & Spencer and KFC for a bargain bucket.

All people would see online were moaning comments when they should’ve been embracing the fact that a movie had the word #Guernsey in the title. Same thing with #RHOJersey. Embrace it, the island looks amazing. Must admit - it’s no #Bergerac ????

A Guernseyman named Paul (@paul_gsy_ci) reminded everyone the show was meant to be “a bit of fun” not reality. He said the negativity surrounding the show was akin to the one surrounding the 2018 movie ‘The Guernsey Literary and Potato Peel Pie Society’, adding that people should be embracing the fact the series has Jersey in its title.

However, he added, the Housewives have nothing against Bergerac.

Despite diverging views on the series, everyone agreed the ‘moonie’ was the funniest scene.

Posted by Steven Simon on Dec 29th, 2020
#RHO Jersey, trash telly between Xmas & New Year who cares heavily scripted the shots of the island look amazing. Well done & bet they had a blast. Even if they did open themselves up to some criticism. Made me laugh
Posted by Dave Mathews on Dec 30th, 2020
I thought it was funny how it mocked the people who say we all live on Yachts and drink Champagne. No doubt some people will be simple enough to believe it all!
Posted by Gary Hudson on Dec 30th, 2020
Sorry, even though l know a couple of the players, l could only dip in and out of the 1st episode, as l found it to be so dire l felt there was no way l could spend time watching it to the full. The next episodes are off the menu, sorry. I will add though the camera shots of the island are stunning, pity the programme itself is so bad
To place a comment please login Login »