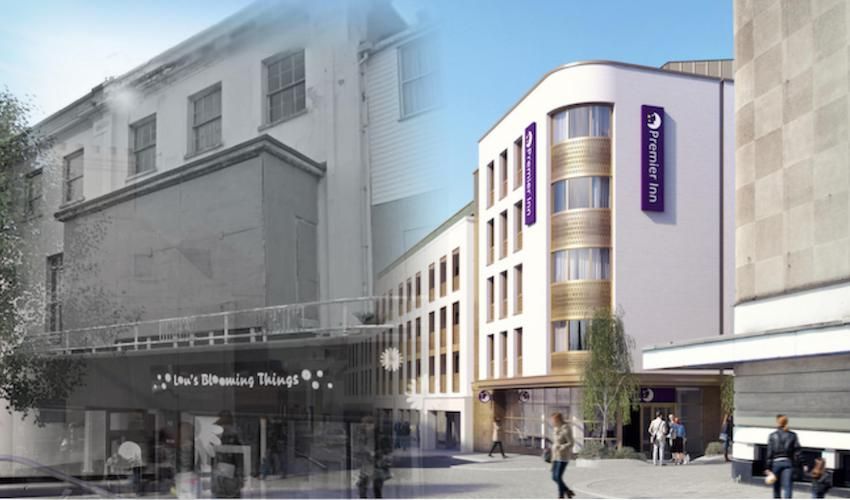 Heritage campaigners’ passionate pleas to save two run-down Regency villas from demolition have failed to prevent £70million plans to bring housing, shops and a Premier Inn to the north of town.

Urgent calls from those determined to protect the old townhouses were unable to prevent the buildings’ fate being sealed by a majority decision from the Planning Committee Panel.

So divisive was the application that it caused a rift amongst the panel of politicians deciding its fate with the Planning Committee’s Chairman Deputy Russell Labey saying he couldn’t “in all conscience” approve the plans - but his three co-panellists all gave it the go-ahead.

The £70million project to redevelop the area opposite the old Odeon cinema on Bath Street promises 100 jobs, 145 apartments and a 122-bed hotel. It comes as part of wider plans to revitalise the north of St. Helier, and follows the approval of the nearby Gas Place development and Town Park extension project.

Video: The development firm outline their proposals for the site (Le Masurier).

In order to bring the development to life, however, two Regency-era buildings will have to be demolished – provoking strong criticism from heritage groups.

Save Jersey’s Heritage even put forward an alternative strategy which would allow for the site to be developed in a way that protects the listed buildings. This was rejected by the site's owner, local development firm Le Masurier.

At the hearing, several people spoke both against and in favour of the application.

Amongst the objectors were former States Member and Chairman of the Planning Committee, and founder of ‘Save Jersey’s Heritage’ Alastair Layzell.

Addressing the Planning Committee, Mr Layzell expressed concerns about the layout of the design.

“When holidaymakers walk out of the Premier Inn and turn right to walk into town, they’ll be confronted with a wall of five storeys that says nothing about the charming island they’ve elected to visit but could be in ‘Anywhere Town.’”

Dubbing Le Masurier’s plans as “old-fashioned,” Mr Layzell called for a more flexible, cooperative approach from the developers to allow for St. Helier to retain its heritage as well as benefitting from contemporary designs.

“It’s the best of both worlds - but it requires a level of understanding and urban design that is absent in these proposals.”

Mr Layzell was joined in his opposition of the scheme by Head of the Jersey Architecture Commission Antony Gibb, President of the Société Jersiaise Alastair Best and CEO of the National Trust Charles Alutto.

Even the States-own Historic Environment Officer Tracey Ingle offered her team’s “strong and sustained objection” to the plans given the impact on the Regency townhouse and other nearby listed buildings.

But their objections were ultimately set aside for the potential benefits to tourism, housing and regenerating that area of town.

Pictured: The run-down Regency buildings will not be spared demolition (Google Maps).

Speaking in favour of the application were: Constable of St. Helier Simon Crowcroft; Chief Executive of the Chamber of Commerce Murray Norton; Chief Executive of Jersey Business Graeme Smith; Owner of the ‘Cog and Sprocket’ bike shop in front of the Regency buildings Ian Williams; Senior Pastor of the Freedom Church – based in the opposite Odeon building – John Stuart Jones; Manging Director of the nearby Daily Globe wine bar; and islander Martin Woodley.

Representatives from Le Masurier and Axis Mason - the architecture firm who designed the scheme - also spoke in favour of their plans.

Constable Crowcroft urged the panel of his fellow States Members: “If you turn down this application we will have to live with another ten or 20 years with increasingly run-down buildings.”

He continued by saying that “the only people who are investing in this part of town is the private sector [and] I think we should bite their hand off.”

Ultimately the application was passed with three votes – Constable Philip Le Sueur and Deputies Rowland Huelin and Graham Truscott – and the panel’s Chairman Deputy Labey voted against the proposals.

Reasoning out his decision, Deputy Labey said that although the scheme is “very seductive” due to the promise of regeneration to the area, but that “some of the development appears a bit soulless to me.”

His co-panellists felt that although it was unfortunate to lose those buildings, the benefits of the scheme in terms of the economy, tourism and links into town outweighed the loss to heritage.

Pictured: An impression of what the development will look like (Axis Mason).

“We are proud to deliver Jersey’s second Premier Inn, which will be ready in 2021, and also helping to meet Jersey’s chronic housing requirements with 144 apartments, plus underground parking, to be completed in 2022.”

“This substantial regeneration will also create a new public pedestrianised route from the Millennium Town Park to the Library and on to the Central Market beyond, providing vibrancy, essential connectivity and a new gateway into town.

He added that construction is due to start in January.