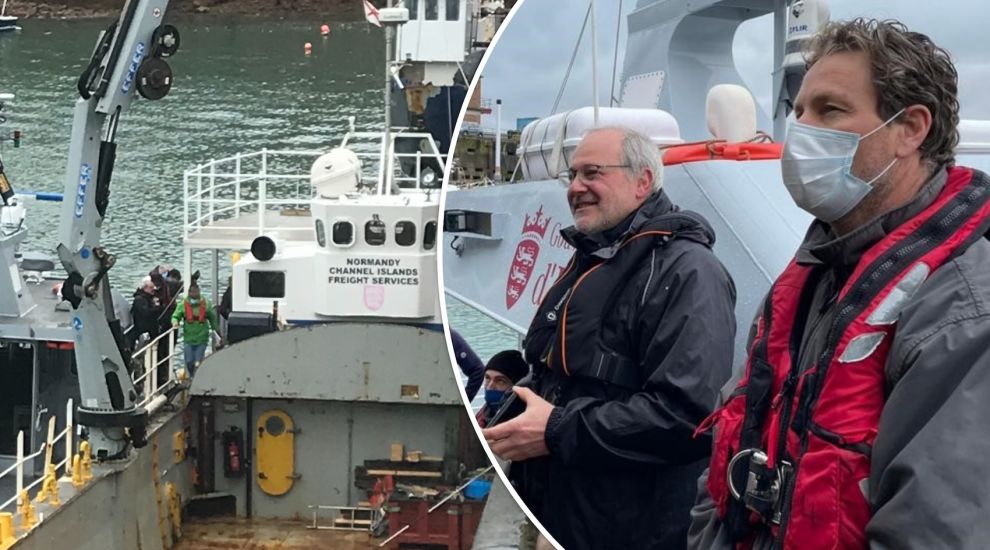 The Assistant Minister leading emergency talks with French officials to resolve the fishing crisis has told Express they were “positive” – but feelings on the French side remain stormy.

He was on board the Jersey’s Norman Le Brocq patrol vessel, which had pulled up alongside the Normandy Trader hosting French fishermen for physically distanced discussions.

The discussions finished shortly before 13:00, after which point the roughly 70 boats that had swarmed St. Helier harbour began to retreat. 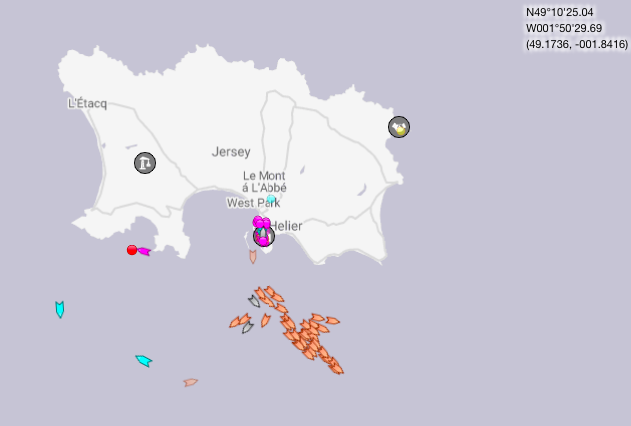 Pictured: The boats are now backing off and returning to France.

Talking immediately afterwards, Deputy Guida said: "It was very friendly discussions and there was no animosity whatsoever. Today’s demonstration was an understandable show of intent and solidarity from a large part of the Bay of Granville fleet.

“They had perfectly legitimate grievances and they simply wanted someone to solve them.

“Most of what was wrong was communication problems because we needed information to issue the licences and that was not forthcoming from the EU.

“There was bound to be issues when we introduced the new regime and the biggest issue was clearly the lack of quality in the data, and that did not happen because of Jersey."

Video: The talks underway between Assistant Minister Gregory Guida (on the Norman Le Brocq) and French officials on the Normandy Trader this morning.

He continued: “We were expressly told that we could not speak directly with the French so any request had to travel Jersey-London-Brussels-Paris-the regions and back again. The data we received at the end of that line just wasn’t good enough quality because it was lost in transit. That was the problem.

“We are now able to speak with them directly. The data must still come from the EU via the UK but we have now been given the ability to talk to the fishermen directly to query any missing data. That is an important step forward.

“They are very happy to be able to speak with us directly. They are not entirely happy with the conditions, but they understand the terms of the trade agreement

“We will also be re-establishing a liaison committee with French and Jersey fishermen, and their administrations, so there will be a mechanism for ongoing discussions, as we did under the old Bay of Granville Agreement.

“The EU, of course, has the right to query any conditions but the conditions themselves are perfectly legal and legitimate. 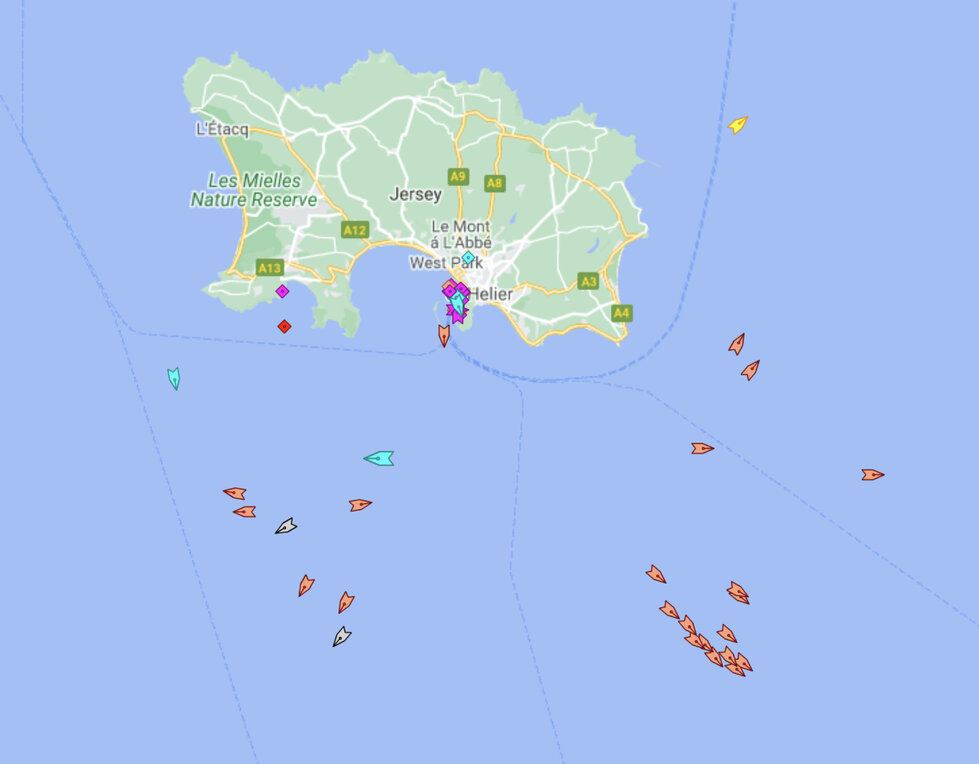 Pictured: The French fleet disperses and boats return to their home ports along the Bay of Granville, from St Brieuc to Cherbourg.

Chief Minister Senator John Le Fondré commented later in a statement: “We recognise that there have been challenges in the implementation of the new trade agreement. Speaking directly to the fishermen has enabled both parties to better understand how those challenges will be addressed, and we are proposing the establishment of a forum which will enable the Government of Jersey to continue to engage with all fishermen in the region openly and constructively.

“I’d like to thank Deputy Guida and all the other parties whose work has enabled the French fishermen to leave Jersey knowing that they had been listened to, and that a step has been taken towards resolving the issues that have arisen during the move to the new trade agreement.”

However, French fishermen told a Ouest France reporter that the talks had left a salty taste in the mouth.

It's been reported that they still want the Minister for the Sea to act on the threat of pulling the plug on Jersey's electricity supply.

On Twitter, Cyril Piraud, Captain of Granville vessel the Pearl, was quoted as saying over the radio: “It’s sh*t, I am disheartened… I do wonder why we even came to see them. They say it’s the French Government’s fault for not giving the right information. They are going to kick us out little by little if we let them, the Minister should act on her treats. This should continue on land. We need to cut them off, that’s the only thing left to do.”

Captain from the Marie-Catherine (Lorient) was said to have commented that “it’s over for new boats who have never fished here. They want to kick the young ones out".

The reporter said that "violent action is not on the agenda", but the fishermen remain furious and are awaiting action from Jersey.

It comes as the European Commission accused the island of breaking the terms of the UK-EU Brexit deal with their new fishing permit system.

The island maintains, however, that they have acted in line with legal advice and in good faith, with respect for all scientific and technical requirements of the trade agreement.

In a meeting this morning, Prime Minister Boris Johnson reiterated that the UK Government would continue to offer its assistance in working to resolve the dispute. 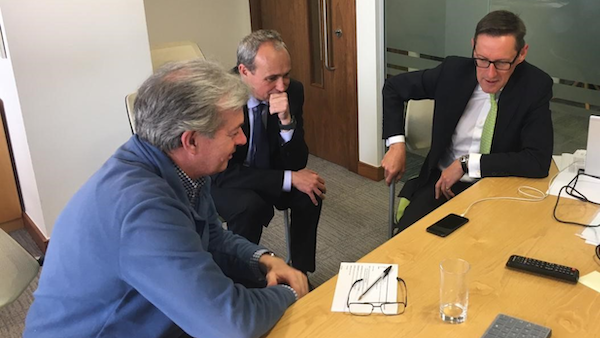 He told the Jersey Ministers that the Royal Navy vessels would remain in place "as a precautionary measure".

However, this evening it's been confirmed that the vessels have been recalled to port in the UK, although the Prime Minister said they would remain "on standby to provide any further assistance Jersey requests."

In his comments, the Prime Minister also appeared to back Jersey in the face of the EU's allegation that its licence regime had broken the terms of the UK-EU Brexit trade deal: "The Trade and Co-operation Agreement brought in changes to fishing arrangements between the UK and the EU. Jersey authorities have a right to regulate fisheries in their waters under this agreement and we support them in exercising those rights.

"We will work with Jersey to support the discussions underway with the European Commission."