The Return of the Pink Panther... in Jersey 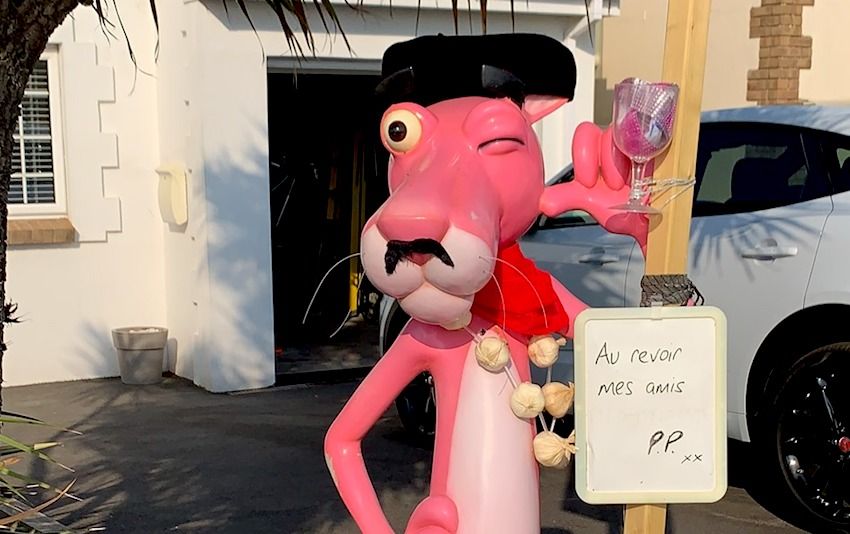 The Return of the Pink Panther... in Jersey

A Pink Panther statue that was kidnapped from a local home has made his way back home unharmed... clasping a bottle of champagne, a baguette, and a tale of a 'wild' night out.

The five foot figurine, which for months has advertised a house for sale on St Clement's Coast Road, and was a familiar site to hundreds of passing motorists, mysteriously disappeared on Friday night.

The distraught owners, who are soon moving to France, put out an appeal on social media pleading with anyone who could help solve the case to contact them.

The first clue they received was from someone who spotted a man and woman walking down St Saviour’s Road near Domino’s very early on Sunday morning with the rose-coloured feline tucked under their arms.

But, fortunately there was no need to call in Inspector Clouseau...

Days later, the now-moustachioed panther was found in a nearby car park by a dog walker, clutching a baguette, a bottle of a champagne and a notice proudly stating: "I'm baaaaaaaaaack."

"Sooooooo sorry for going on the missing list... The gorillas threw me a surprise leaving party and when they 'Go Wild', they really GO WILD!!" it read.

"We are all feeling a little bit delicate and extremely ashamed for making you worry. Here's a bottle of bubbles as a peace offering and I promise this will be my last blow-out (in Jersey anyway). Vive la France."

Following his return, his owners updated the Pink Panther's local fans in a post on Facebook: “Pink Panther is home!! He’s clearly been on a drunken night out with new ‘friends’ who certainly seem to have looked after him, but we’re all nursing sore heads maybe for a couple of days!"

They also took the opportunity to share their gratitude with those who had helped with their investigation into the 'missing' creature.

"Jersey community you are the best! Thank you to the dog walker who knocked our door to tell us Pink Panther was in the car park, with a bottle of champagne, a baguette and a story. He’ll be back out in the front garden in the next couple of days – and this time with a padlock or tracking device attached. Thank you for all your kind support."

Islanders were delighted to hear the update, with numerous members of the local Facebook community sharing their "relief" to see the Panther back in his rightful place.

"Glad he's back. I loved seeing him in your garden, always made me smile. Let's hope his head is not to sore after all his drinks!" one wrote.

Another fan added: "Great news! Bet he could tell you a tale or two though."

It's likely not the last we'll hear of the Jersey Pink Panther, who'll be accompanying his owners on their travels across the sea.

Pictured top: The adventurous - if a little hungover - Panther in question, who had become a fond site for passing motorists, runners and walkers in St. Clement. (Jersey Pink Panther/Facebook)