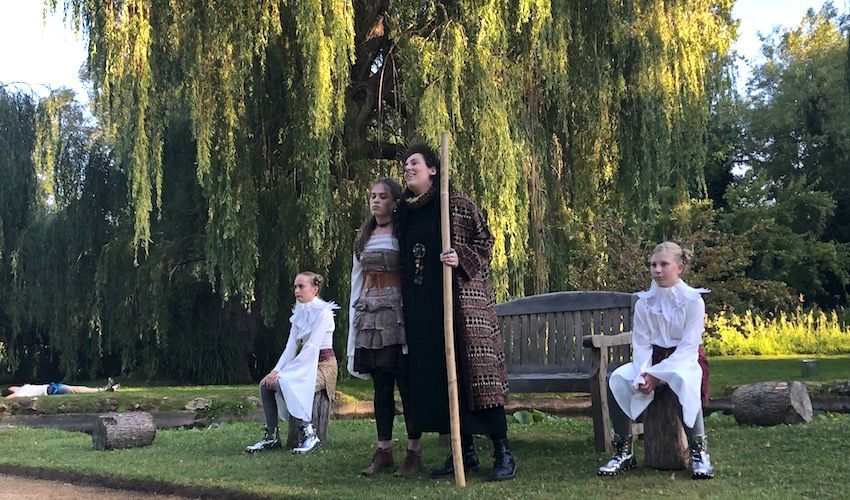 The melancholy magic of Shakespeare’s last play filled the grounds at Samarès Manor last night as a vibrant ensemble of actors carried a fresh rendition of ‘The Tempest’… in 90 minutes.

Seldom is Shakespeare so succinct, but this bold production by Daniel Austin wastes no time - breathing new life and sense into the Bard’s world of illusion, wonder and betrayal.

As ever, Austin’s cross-gender casting and inter-generational company creates an intriguing cast who draw you in, subvert your expectations and bring lightness to an often dense and complex text.

Particularly impressive was the decision to cast five actors – Hettie Duncan, Lily-Mae Fry, Peter Jones, Fynn Mason and Kate Meadows – to embody the monster-slave Caliban as a writhing mass of mouths and limbs. The physical discipline, vocal power and visual impact of this choice was quite breath-taking – an effect which is not easy to achieve in an al fresco context.

Pictured: The synchronicity of the five actors playing Caliban was particularly impressive.

Great sense was made of this mischievous play – even by the production’s youngest cast members. Tamsin Hollyman’s Samarès debut saw her deliver a wistful Miranda, giving a winning clarity to a role often perceived as thankless.

In fact, the production was full of unexpected portrayals. Amongst them, Nicole Twinam’s stoic but vulnerable Prospero brought a delicate nuance to a role which is often played with unfeeling swagger. Twinam’s command of the stage was only enhanced by playing opposite Mac Galvin’s nimble and “moody” Ariel.

However, the whip-smart performances of drunken double-act Stephano (Richard Pedley) and Trinculo (Andrew Davey) provided the comedic apex of this all-rounder production set in the picturesque Manor’s Japanese gardens. There’s great skill in portraying drunken humour without straying into the realm of caricatures and this understated and intelligent duo definitely made for charming and immensely watchable fools.

Pictured: Richard Pedley as butler Stephano was a charming fool - even in drink!

As more wasn’t made of their relevance within the style of the production itself, the beautiful regal-meets-steampunk costumes were left a little incongruous.

Although crucial moments of this pacey adaptation were occasionally lost due to slight staging misfires and a couple of sluggish transitions between scenes interrupted the rhythm – this was an otherwise vigorous version of Shakespeare’s 37th play.

But ultimately, everyone in the cast seemed to acknowledge the bitter sweetness of ‘The Tempest’: the sourness of Prospero’s tyranny on an island not really his own, the unsettling sorrow of a Caliban desperately seeking alternative servitudes and the self-aware illusions conjured up by the mysterious island where the play is set.

Grab a picnic basket, bring a fold-out chair if you want to be guaranteed a comfortable seat and head down to the Manor for a perfect storm.