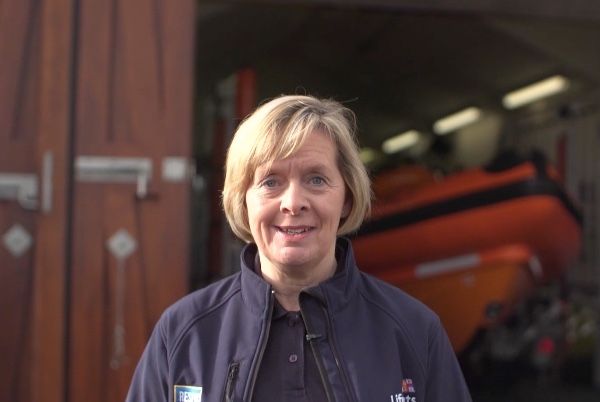 The RNLI Director who led negotiations with the former St. Helier lifeboat crew has announced her resignation from the lifesaving charity.

Community Lifesaving and Fundraising Director Leesa Harwood will officially step down in October 2018, after nine years with the organisation.

During that time, she oversaw and led the merging of the RNLI’s operational and fundraising teams.

More recently, she was tasked with diffusing rising tensions with the former St. Helier RNLI crew.

She visited the island on numerous occasions in the months following a mass walk-out, prompted by the standing down of coxswain Andy Hibbs.

Pictured: Ms Harwood visited the lifeboatstation last year in a bid to resolve ongoing tensions between the charity and St. Helier crew.

Ms Harwood described her time with the charity as “rewarding, humbling and fulfilling.”

“It has been an absolute privilege to work with such an incredible team of staff and volunteers here at the RNLI and to have been able to add value to this very special charity. Now though, commitments outside work mean that I can no longer give the time and energy that this role demands and after 9 years at the RNLI it is time to move on.”

Paul Boissier, RNLI Chief Executive, added: “I would like to thank Leesa for her commitment and the leadership she has shown over the last 9 years.  She has been instrumental in some brave decisions that have set us up for success in the 21st century.”