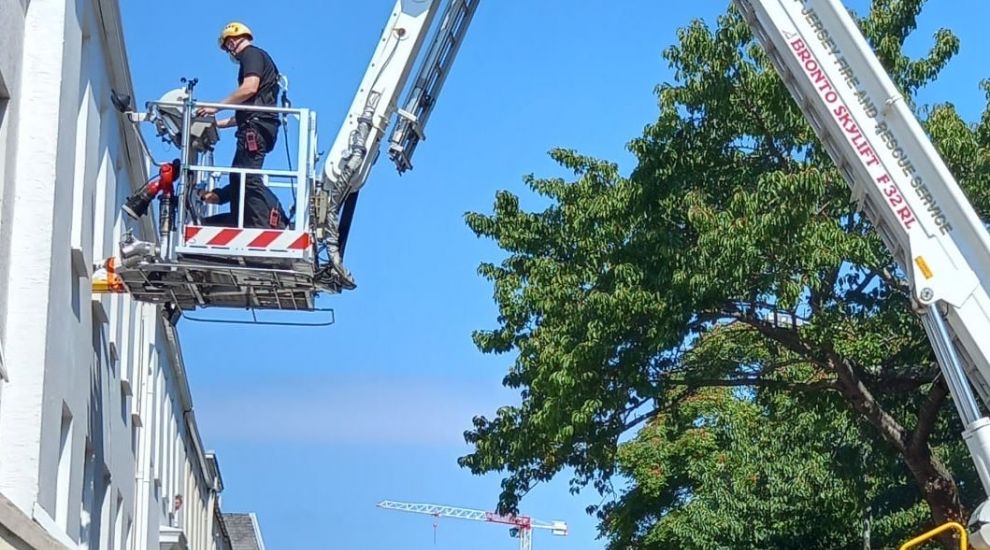 Several roads had to be closed for around an hour this afternoon to enable a patient to be stretchered out of a home via an upstairs window during a “medical emergency”.

Jersey’s Fire and Rescue Service was called to St. Saviour’s Road by paramedics shortly before 13:00 after it was decided following an initial assessment of the casualty that “the best course of action would be to extricate them horizontally on a stretcher from the first-floor window of the property.”

Using an aerial ladder platform, firefighters carefully removed the patient from the building and brought them to a waiting ambulance.

Both St. Saviour’s Road and its adjoining roads were to be closed throughout the process for the safety of the public and the safe operation of the aerial ladder platform.

The roads were reopened around 14:00, and the rescue team thanked islanders for their “patience and understanding”, while apologising “for any inconvenience caused.”

Fire and Ambulance are no longer operating on St.Saviour’s road, thanks to everyone for their patience and understanding and apologies for any inconvenience caused. pic.twitter.com/JvmP8lqVcS

Islanders have since praised the efforts of all involved, with one Facebook user lauding the “excellent inter-service cooperation”.

Pictured top: Jersey Fire and Rescue Service were praised for their efforts in extricating the patient using their aerial ladder platform. (JFRS)

Local firefighters on the road to deliver fire engines for Ukraine