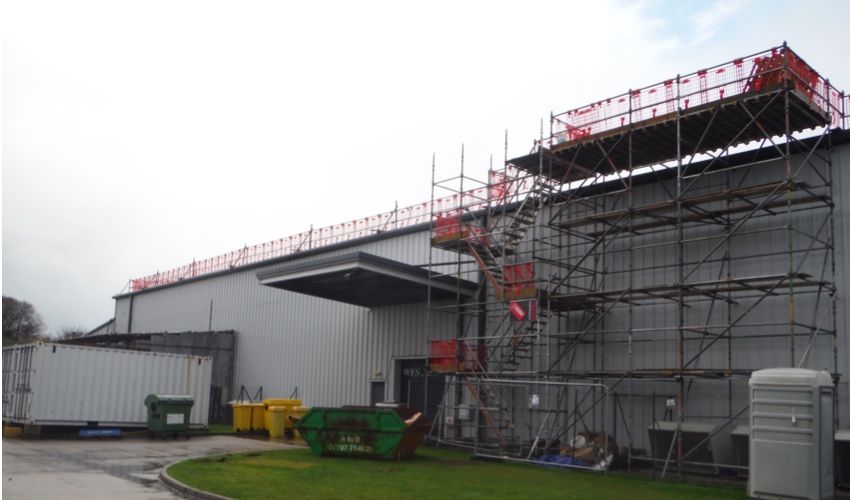 A scaffolding company has been fined £35,000 after a 45m section of guardrail weighing half a tonne collapsed in high winds.

No one was injured when the section fell about 8m from the roof of the Jersey Dairy building in Trinity in December 2020, however a dairy employee had walked under it moments before.

In the Royal Court on Friday, A&A Scaffolding Solutions Limited was fined for breaching the island's Health and Safety Law, something the company had admitted at the first opportunity.

A&A had been asked to provide scaffolding at the diary by Sunworks Ltd, which was installing solar panels on the roof for Jersey Electricity.

A&A originally specified that 25 scaffold towers should be erected to secure the 237m guardrail, which was needed to protect the panel installers.

Sunworks, however, instructed that there be no scaffold towers used to support the roof scaffold edge protection or guardrail, and there should be two loading bays – for workers and materials to reach the roof – and one staircase. 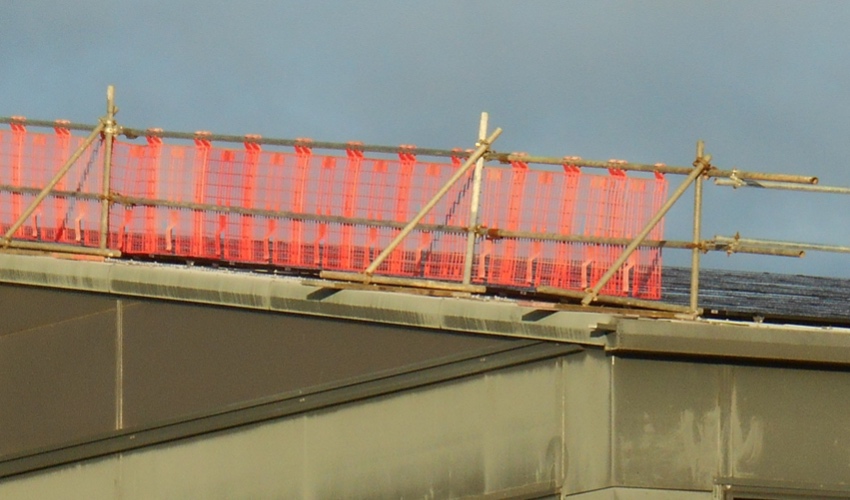 Pictured: A section of remaining guardrail photographed after the collapse.

In setting out the facts of the case, Crown Advocate Chris Baglin said: “At this point, [A&A] should have informed JE that they could not erect the scaffold as requested to industry standards and to meet their obligations under the Health and Safety Laws.

“A&A maintains that they did so inform Sunworks that the scaffold requested was not to industry standards. A&A duly provided a scaffold, that while it met the client’s requirements, fell below industry standards and was unsafe and unstable, as demonstrated by its failure and collapse on 4 December 2020.”

To erect the guardrail without towers, A&A built a largely freestanding structure resting on the roof which was secured with ‘pressure ties’.

The company did not commission its engineering consultant to draw a detailed design nor did it carry out an adequate risk assessment, as it should have done, the Court heard.

Advocate Baglin continued: “The construction of the scaffold took place between 21 September and 16 October 2020 and comprised the installation of some 237 metres of single, roof mounted guardrail fitted to the roof, plastic brick guards fitted to the guardrail to prevent objects falling through the gaps in the guardrail and the two scaffold loading bays and staircase access.

“In relation to the brick guards, Sunworks requested they be fitted on or about 15 October. [A&A] fitted the brick guards, despite advising against their use because, as they stated, ‘they act like a sail in high winds’.

“Again, [A&A] should not have acquiesced to the client’s request where health and safety was compromised, all the more so as the existing structure was not properly secured to the building. That statement did, of course, turn out to be sadly prophetic.”

The lawyer said that a section of guardrail had collapsed inward onto the roof on 2 November 2020, which was repaired and additional clamps were fitted.

However, at around 05:35 on 4 December, 45m of guardrail collapsed to the ground, prompting an investigation by the Health and Safety Inspectorate, which led to the prosecution.

Defending A&A, Advocate Adam Harrison said that the company believed at the time that the structure had been safe but conceded that it had been wrong.

He said that the firm, which was represented in court by its founder and director Alex Wareham, had learned important lessons from the incident, including not accepting input from clients or contractors on the design of critical structures, and always waiting to receive the advice and calculations of a competent engineer.

Advocate Harrison added that the company took health and safety very seriously and it had taken practical steps to avoid accidents in the future, including buying new equipment and updating risk assessments.

He said the Crown’s suggested fine was too high and proposed, in light of the company’s initial plan for the guardrail and its other mitigation, that a fine of between £30,000 and £40,000 was more appropriate.

Commissioner William Bailhache, who was sitting with Jurats Elizabeth Dulake and Karen Le Cornu, agreed, setting the fine at the mid-point.

“The erection of scaffolding is a high-risk business and the defendant acknowledges that it fell short in this respect,” said the judge.

However, in light of the evidence, he said the Court "hesitated" to call the case a flagrant disregard of the law and it took into account the firm’s clean record up to this point.

A&A were also ordered to pay £5,000 towards prosecution costs.

Pictured top: The scaffold at the Jersey Dairy before the collapse.