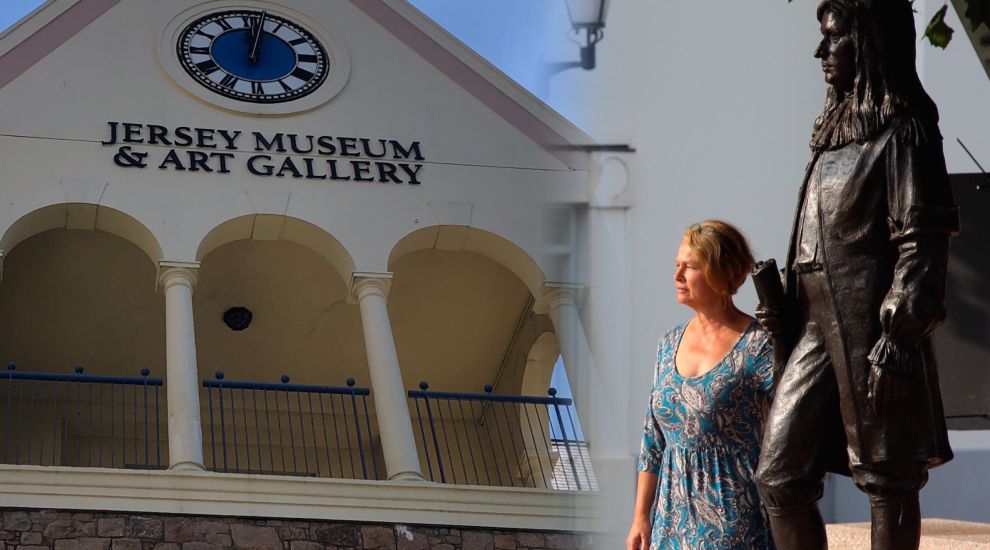 The sculptor behind the statue of New Jersey founder and slave trader Sir George Carteret is calling for it to be moved to a museum.

The figure was erected in St. Peter in 2014 to commemorate the 350th anniversary of the founding of New Jersey.

While the accompanying plaque acknowledges Sir George’s key role in island history, it does not reference the fact that the privateer supported and profited from the trade of enslaved people or the Lenape, the native people that occupied the New Jersey land.

In the wake of the global Black Lives Matter movement, protestors have called for the statue’s removal, with some protestors going so far as to cover it in paint.

The first time, in June, white paint was thrown over the bronze figure.

Then just last week, Sir George’s hands and feet were doused in blood-like red paint, and his limbs bound in paper chains.

Speaking to Express, sculptor Laury Dizengremel says she never would have made the sculpture had she known Sir George made money from the trade of enslaved people – something that only came to her attention following the first attack.

The artist explained that ethics play a large role in her work, and that she will gladly refuse a commission if she doesn’t feel comfortable about the subject – regardless of the sum offered for it.

This was the case, she said, when she was asked to recreate boxer and convicted rapist Mike Tyson. 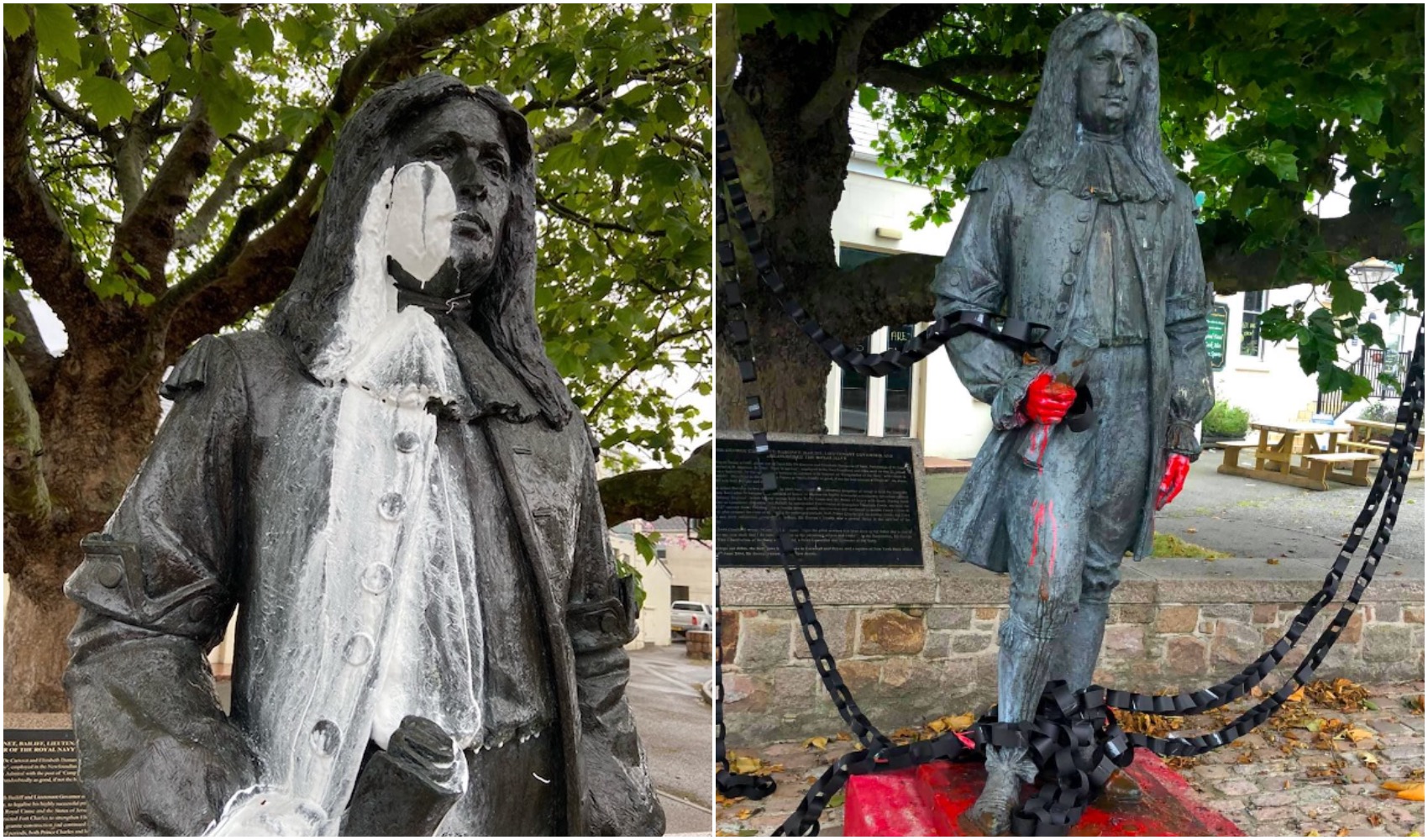 Pictured: The two attacks on Sir George in June (left) and August (right).

“The guy was a violator of women… I’m too much of a feminist to have wanted to have ever done Mike Tyson.”

However, she said she unfortunately did not come across Sir George’s “unsavoury past” during the research period in advance of making the work.

As well as reading about his life, Laury met with historian Frank Falle and Ned Malet de Carteret, one of Sir George’s descendants.

She also kept in close contact throughout with St. Peter Constable of the time John Refault, who commissioned the work.

Laury said the revelation of Sir George’s past to her led her to question, “Did these guys know then go ahead and commission anyway?” 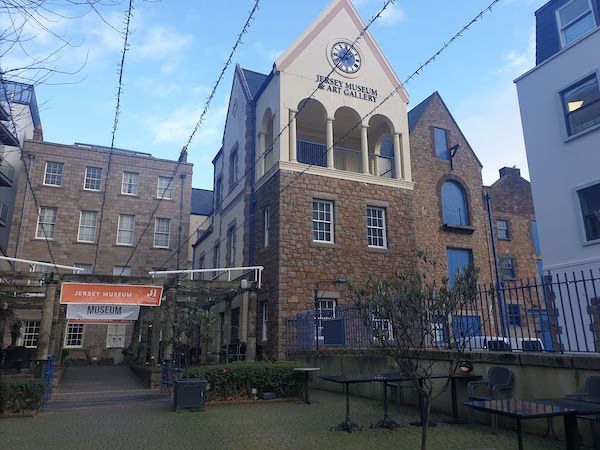 Pictured: Laury thinks Jersey Museum would be the most appropriate location for the statue, where it is secure and can be presented with its full historic context - the good and the bad.

However, she said she is giving all involved “the benefit of the doubt” – instead putting it down to a failure of due diligence, for which she also accepts responsibility.

What’s clear now, she said, is that the statue must be removed.

“If I weren’t the artist I might have a different viewpoint – melt it down. For me as an artist it would be difficult to melt it down…

“This is the first sculpture I’ve ever had in my whole life that’s been defaced and I’ve made sculptures around the world. The first time I was seriously shocked, now I think this is going to happen again and again… That monument should not be there because it’s now attracting way too much ire.”

She continued: “I deplore this controversy. I wish I never had anything to do with it. I wish I’d never made that sculpture but I did, so now that I’ve made it the best thing I can think of is shove it in a museum – that sounds like a good idea with an interpretation that gives the full picture of this guy.”

She added that this would also protect it from further attacks.

While some have argued that an updated interpretation board alongside the St. Peter statue explaining the more negative aspects of Sir George’s life would bring a balanced end to the saga, Laury says that she does not believe this would be enough. 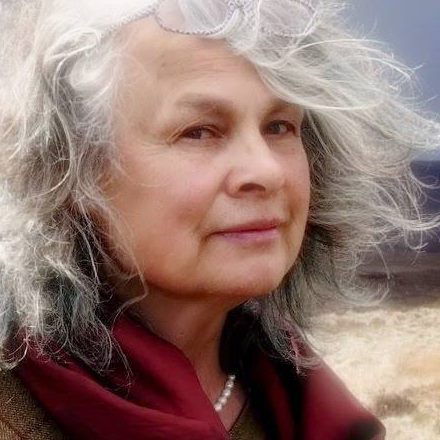 Pictured: Laury says her ethics factor into her work, and she regrets ever making Sir George Carteret.

“Are people going to let it go if there’s a new plaque made? If it says, ‘This man was good for X, Y, Z reasons and he was bad for X reasons, it has now come to light that he had unsavoury links to the slave trade,’ would that be enough? I don’t think that would be enough. I think it has to go into a museum.”

Laury added that she supports calls for a counter-monument – and would even be happy for the most recent defaced version of her work to feature in a museum or public building.

That way, she explained, it would take on a new meaning, representing various layers of Jersey history: Sir George Carteret’s era, and this latest chapter as islanders seek to reconcile with their ancestry.

“I have tried to never be a prima donna. I try to have a sense of humour. One of my impulses when I saw this latest [attack on the sculpture] was, ‘That’s pretty creative – it really works as an installation that shows how people feel.’

“You could take the whole thing and put that in a museum, with the red paint, with the chains, and say, ‘Ok, this is the art piece now.’ The original art piece and the defacing shows the upset that it caused because people felt strongly enough to go and do this.”

Posted by The old git Git on Aug 19th, 2020
Maybe they should demolish St Ouens manor if he bought that with "Slave Money"
Posted by nigel pearce on Aug 19th, 2020
Ridiculous suggestion. We must not give in to a few agitators who are trying to rewrite history. Will we have to demolish churches because of the actions of the clergy in the past?
Posted by Scott Mills on Aug 19th, 2020
We'll have to send the Royal Family statue of Queen Victoria, and living royals to the museum. They profited from the trade as well. More people/organisations were involved. Let's pretend history didn't happen, or compare it to 21st century world.
Posted by Yvonne Raynes on Aug 19th, 2020
Why should it be moved because of a few stupid people. History is history and should be remembered so that the same mistakes will not be made again. Does that mean that the pub will have to change its name.
To place a comment please login Login »