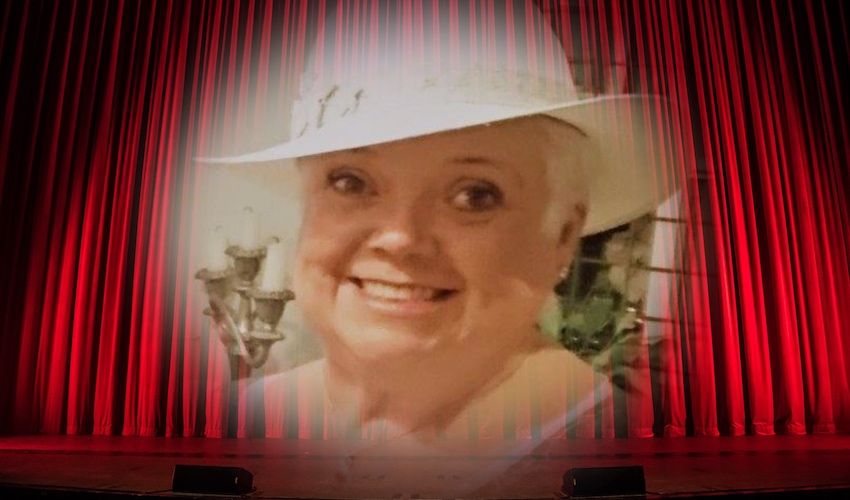 Tributes have poured in for a "vibrant" and "towering presence" on the local arts scene, praising her talents and mentoring qualities, after she passed away at the weekend following a long illness.

Jane Wakeham is remembered by many who knew her either through her work at Channel Television, on local theatre productions or as the Principal of the Jersey Academy of Speech and Dramatic Art (JASDA).

Many of Jane’s friends also knew her from her teenage days as a “badminton star” or as a proficient bridge player, Jane and Michael Blackie recalled on Facebook, describing her as “a larger than life character, in all senses, who we shall all miss”.

“But it was the theatre and all aspects of drama that were central to her life and she delighted in passing on this love to her pupils,” they added.

Juliette Hart’s son, Joe, was one of Jane’s first pupils at the Jersey Academy of Speech and Dramatic Art (JASDA) in 1996.

“We became friends through our love of poetry and her wonderful approach to teaching - Jane instilled such easy confidence in her pupils and she always helped them to pick the perfect poem or prose for performance in exams and the Eisteddfod,” Juliette told Express.

“Jane and Joe shared a wicked sense of humour and he never wanted to miss class, it was too much fun.”

Jane was a regular presence in the Eisteddfod, having competed from a very young age right up until last November when she won her classes - “as usual!” Juliette said - and came away with yet more trophies and cups.

“Even as her illness progressed, causing her voice to deteriorate, she could still command the stage and evoke such emotion,” Juliette said. “Her comic timing was brilliant too.”

“I will not forget her readings of Maya Angelou's ‘Still I Rise’ and Louis MacNeice's ‘Prayer Before Birth’where she brought strength to each word and held us spellbound,” Juliette recalled.

“Another highlight of La Poèt'tie was her performance of Titania with a Jèrriais-speaking Oberon.” 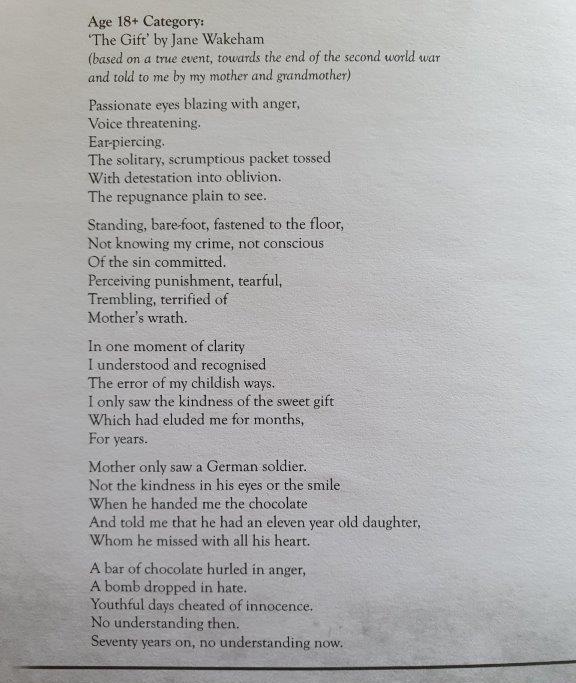 Pictured: Juliette kindly shared one of Jane’s poems, ‘The Gift’, which won the Liberation 70 Poetry Competition.

Jane also performed her own poetry – described by Juliette as “sometimes sensitive, sometimes funny, but always amazing” - at the monthly open-mic.

“She encouraged and inspired everyone,” Juliette said. “She was hugely talented and full of love. It is upsetting to imagine that I will no longer be in her presence, that she has left the stage.

“By coincidence, I was holding a copy of ‘He Wishes for the Cloths of Heaven’ by W. B. Yeats as the phone rang, to bring the news to me of Jane's death. I know she would've loved that.”

Jane’s many talents were also praised by Deputy Russell Labey, who met her over 30 years ago.

“It was laughter at first sight!” he recalled. “We worked together at Channel TV and on lots of theatre productions, she really was a superb director, a poet, a lover of language and a very fine teacher to her speech and drama students, many of whom scooped the top prizes and cups at the Eisteddfod.

“The loss of such a lovely, kind vibrant and fun friend is difficult to endure.”

Deputy Kevin Pamplin praised Jane’s mentoring qualities, noting that she helped many islanders not only with speech and drama, but in other elements of life.

RIP: Dear Jane. You’ve played many parts in many fabulous & sometimes outrageous ways, but your best role was the one of friend to many who now miss you, like me. Rest now in the great green room in the sky. We will meet again soon. Thank you ❤️ pic.twitter.com/EjThe2Uwsl

“Of course, you can’t teach talent, you can support and encourage - and that’s what she did for many,” he said.

“That extended beyond her love of theatre and to those further afield with her ability in the face of illness to teach courage with her wicked humour in place as ever.

“She was very supportive to me and shared that love and support to my own children and we will never forget that and her, and send our love to all saddened by her loss.”

The Jersey Green Room Club also remembers Jane fondly as a “much-loved member”. Jane was heavily involved with the local drama club - from directing, producing, and partaking in its productions to even sitting on the Management Committee.

The theatrical group expressed their condolences to Jane’s family and friends. “Our heartfelt thoughts are with all those who knew and loved Jane at this sad time,” they added. “Our memories of Jane will live on at The Jersey Green Room Club."

"I have many memories on stage with Jane throughout the years, she was a very dedicated member when involved in a production, she was very professional and had a dry sense of humour,” Guy Le Sueur, the Club’s President, said. “Jane was respected by all and will be sadly missed, especially by the amateur dramatic community.”

Annette Perkins, the Club’s Vice President, knew her “dear friend” Jane for 40 years. She says the pair had lots of fun on productions.

“A memory of her is when she played an underwater fairy in Robinson Crusoe,” Annette recalled. “She came on stage with slippers and snorkel. She could make fun of herself, which was lovely. I am going to miss her dearly and know that she will also be missed by the am-dram society."

Local theatre production company, TC Productions, described Jane as a “towering presence in the local arts community” in a heartfelt post on Facebook.

“A woman of many parts, a talented actor, writer, director, an inspirational drama teacher, the list goes on,” they wrote.

“She was a great collaborator in Jack Higgins (later TC) productions and directed with enormous flair, creativity and élan, four of our finest productions.”

Express would like to extend its condolences to Jane's family and loved ones.

Posted by Denise Shrives on Apr 29th, 2020
It was a privilege to know you, when ever we meet it was not like we hadn't seen each other for ages we just feel into "chat mode". God speed dear Jane, heaven is going to be more fun now that you are there. Deex
Posted by Paul Troalic on Apr 29th, 2020
So saddened by Jane’s death. I knew her mum and dad when they ran the Roseville Street post office and I was an auditor. They were lovely people and Jane was a huge credit to them. She was a huge personality and a real fighter. RIP Jane. Heaven will welcome someone very special.
To place a comment please login Login »

FOCUS: A year as Police Chief