Shoppers find something fishy in the water 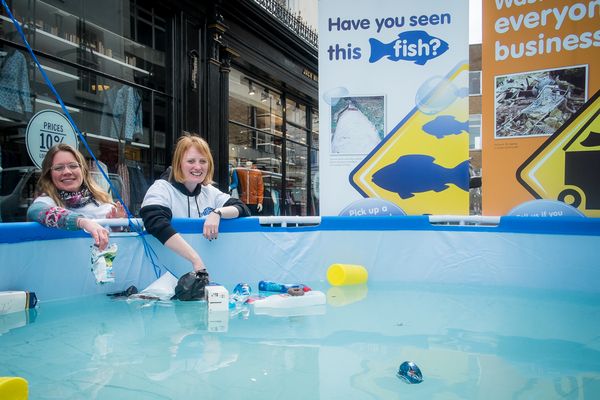 Shoppers find something fishy in the water

Campaigners held an unusual demonstration in town yesterday to show shoppers the harm that tipping chemicals down the Island’s drains can do.

The Island's champion surfers, swimmers and sailors all waded into a mock polluted pool set up on the high street to show their support for Blue Fish Fortnight – a campaign being run by the Environment department, Eco-Active and Jersey Water to reduce the amount of pollution reaching the Island’s water.

British and European champion surfer Arlene Maltman said: “I’ve surfed in France in areas where at times they’ve had to close the beach because the water is polluted. That’s not an experience I relished and it made me appreciate just how fortunate we are in Jersey to have clean seas. I hope that by raising awareness of good practice it can stay like that, but we all have to play our part in acting responsibly.”

All the Island’s surface water drains on the roads are designed to take rainwater to the nearest stream, reservoir or the sea. But tipping harmful waste like paint, oils, sediment and litter into those drains can pollute the drinking water and cause damage to wildlife and their habitats.

The Water Pollution (Jersey) Law was introduced by the States 14 years ago which has helped reduce the number of water pollution incidents and improved the quality of the Island’s water. But the Environment department still investigate more than a hundred reports of pollution each year and with one litre of solvent being enough to pollute 50 Olympic-sized swimming pools, it only takes one spill to have a big impact.

As part of the campaign, the Island’s secondary school students have been learning what a chemical spill can do to our waters.

They have been working with TV footage put together by the Environment department and Transport & Technical Services. It shows mock chemicals being poured down a drain at Rue de Près and bright green polluted water making its way through the countryside to the coast. The students are producing news reports on the incident and the winning one will be broadcast on Channel TV.

And in primary schools children are putting together presentations to show their classmates what they have learnt about water pollution.

Local sailor Tracey Watson said: “We live in such a beautiful Island with beautiful beaches and many of us enjoy the variety of water sports on offer.  To keep it this way, it is crucial to raise awareness of protecting our waters from harmful pollution.”

As part of the campaign, a large blue fish will be projected on the wall of the incinerator at La Collette during Blue Fish Fortnight.

Here are some of the substances that can cause pollution: