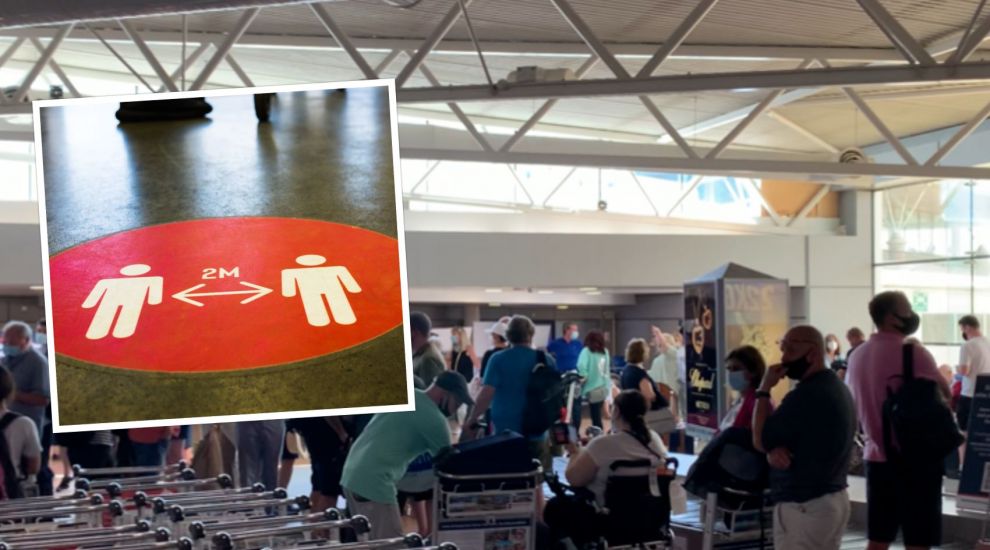 Lack of space at the airport is preventing passengers to maintain “optimal distances” at peak times, Ports of Jersey has admitted.

Ports of Jersey said the large number of passengers coming through their ports and the PCR testing area are causing the arrival process to take longer than usual.

The explanation came after a traveller contacted Express to voice their concerns over the crowding happening at the airport arrival hall on Monday, after arriving at 13:15 from London Heathrow.

“We queued for nearly two hours with no ventilation and no social distancing, this is a definition of a super spreader event,” they wrote.

Pictured: A passenger said they had queued for nearly two hours with no ventilation and no social distancing.

Contacted by Express, a Ports of Jersey spokesperson said Government guidelines were still being applied at the Airport.

“Since the advent of the pandemic we’ve introduced a series of wellbeing measures at both the airport and harbour, including the compulsory wearing of masks, seating divides, hand sanitisers, regular cleaning and frequent PA reminders,” they said.

“We continue to advise passengers to be aware of the space surrounding them and to take every measure to protect themselves wherever possible, abiding by the guidelines we have established.

“In addition to these measures, we also have staff in the baggage reclaim hall monitoring the queue and reminding people to maintain social distance wherever possible.”

Pictured: "This is a definition of a super spreader event," the traveller said of conditions in the Arrivals Hall on Monday.

However, they added they were experiencing difficulties in ensuring the guidelines are respected given the large number of people arriving in “peak summer season”, all of whom have to receive a PCR test upon their arrival, lengthening the process.

“At peak times, such as Monday for example, where arrival numbers are high, there are a larger than usual number of passengers awaiting testing and, as we are constrained by space, it is not always possible to maintain optimal distances,” they said.

“We continue to monitor the situation and of course any new guidance given to us by either the Government of Jersey or relevant transport authorities will be implemented.”

Posted by Donal Dolo on Jul 21st, 2021
Well you need to make it possible
Posted by Robin Mallet on Jul 21st, 2021
March 2021 London Heathrow I arrived from Brussels. Arrivals hall full to bursting, at least 2-3000 people queuing for Border Control. I queued for four and a half hours, social distancing, what is that? However we were provided with free bottles of water. Two hours is not too bad really.
Posted by Keith Marsh on Jul 21st, 2021
Everything is possible, just needs good management.
Posted by Roy Dean on Jul 22nd, 2021
2 hours with 2,000 people and of course a Virus is respecting 2 metre social distancing..
I love virus, how they are so humanistic and sensible
To place a comment please login Login »