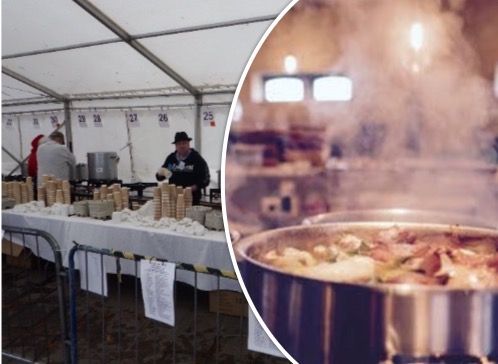 Whether you went quirky with artichoke and coffee or a pumpkin and granola or played it safe with a classic leek and potato, if you enjoyed a sip of soup in the Royal Square yesterday, you’ve helped more than 100 islanders who will spend their Christmas in one of the island’s shelters.

This year’s soup kitchen by the Shelter Trust – now in its nineteenth year – raised more than £12,000 for homeless people in Jersey.

That money will go towards operating the island’s four homeless shelters, and the 400 people who seek accommodation and support from the Shelter Trust each year.

One in four of the Shelter’s current clientele are under 25, and the amount of females seeking help is also on the rise.

The Trust gives those people a valuable helping hand during the festive season – and throughout the rest of the year – with access to washing, cooking and laundry facilities.

Pictured: Hungry crowds queuing up for their soup as the marquee doors opened at 10:30.

Richard Robins, Treasurer of the Jersey Shelter Trust, told Express that he was delighted with the outcome of the event.

"Yesterday was a great day. The weather was perfect and we had wonderful support from the public of Jersey. We received several generous donations on top of donations for soup and this helped us to reach our target funds raised of just over £12,000," he said.

Thanking everyone that got involved, he added: "We are so grateful to all the restaurants and community groups who donated our 40 soups and to all the islands’ bakeries who donated bread. Finally, a big thank you to our sponsors LGT Vestra who covered all our financial costs which means that every penny raised will go to the Shelter Trust for Jersey’s Homeless."

FULL MENU: The Soup Kitchen's back! What's your flavour?