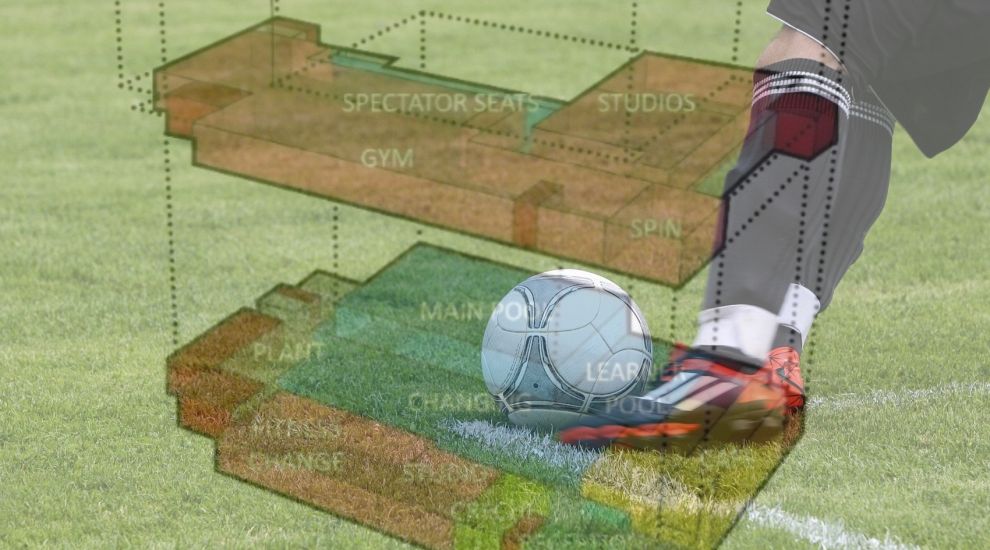 Express takes an in-depth look at the £100m plan to dramatically change the sports landscape in Jersey and the 10-year timeline to achieve it.

The Government has today launched its 'Inspiring Active Places Strategy' to build three new sports hubs, an Island Stadium, and refurbish a number of old facilities across the island.

As part of the new £100m project, a timeline has been released which will see sport leave the Fort for good in 2022, and the first of the new facilities up and running by around 2024.

While the Government says no dates are set in stone, they've released a roadmap Though the Government has emphasised that its current 'Inspiring Active Places' timeline dates "are not fixed at present", and that for purposes of investment planning, a roadmap of the decade has been outlined.

In this piece, Express breaks down the plans and facilities for each new project, and looks at the potential future of sport in Jersey...

Stage One of the plan will include the redesign of both Oakfield and Springfield Stadium to facilitate the rehousing of clubs currently based at Fort Regent.

Deputy Hugh Raymond confirmed yesterday at a press conference that clubs at the Fort would only be moved out once appropriate alternative facilities were ready for use. 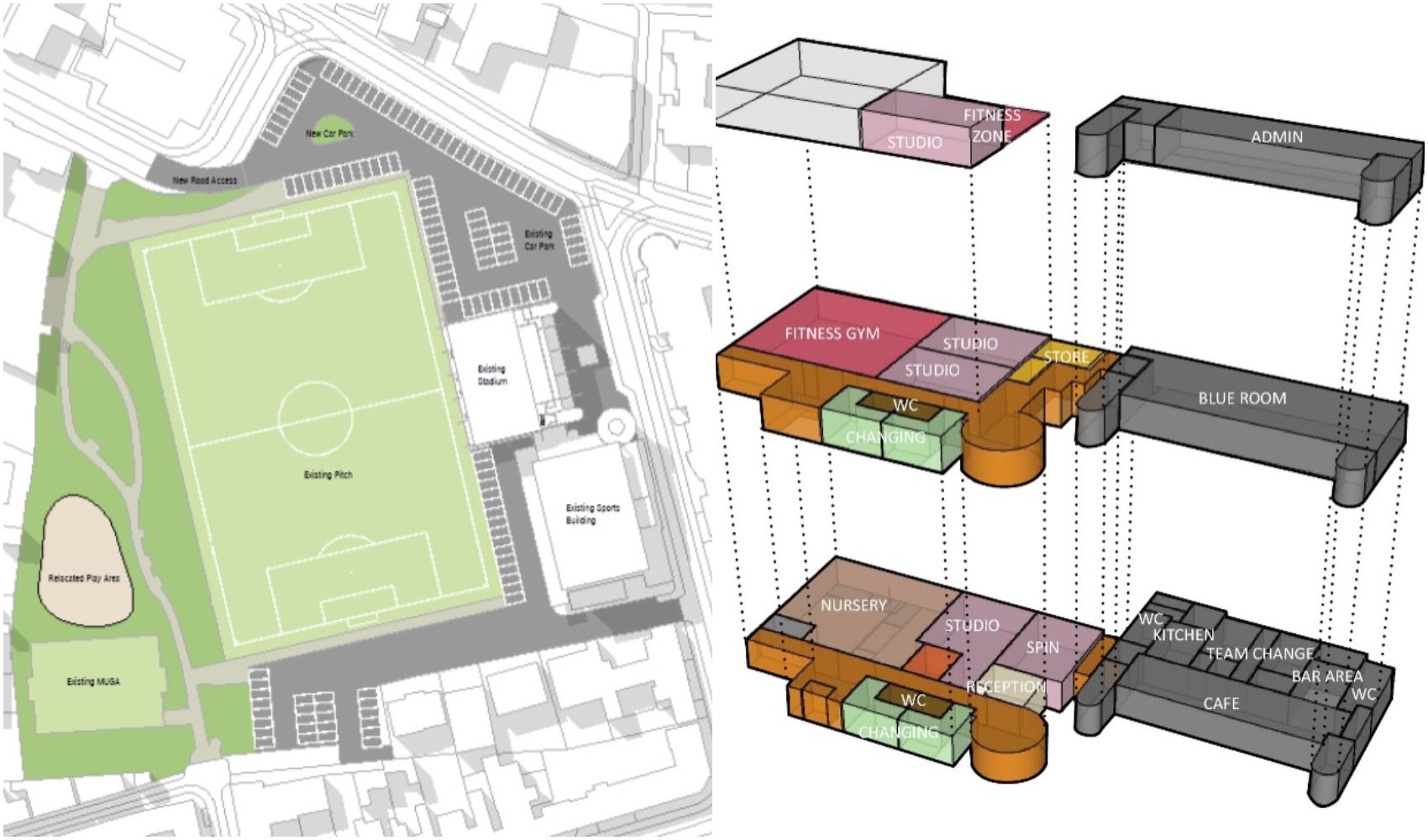 Pictured: Springfield will be one of two facilities given immediate investment to ensure all of the Fort's sports clubs have somewhere to go when moved out of the facility in 2022.

However, funding sources are yet to be decided.

The strategy document says that the following is planned for the centres:

The first of the new facilities to be built fully, the Le Rocquier site is described in the strategy "as the public sport and wellbeing hub for the east of the island". 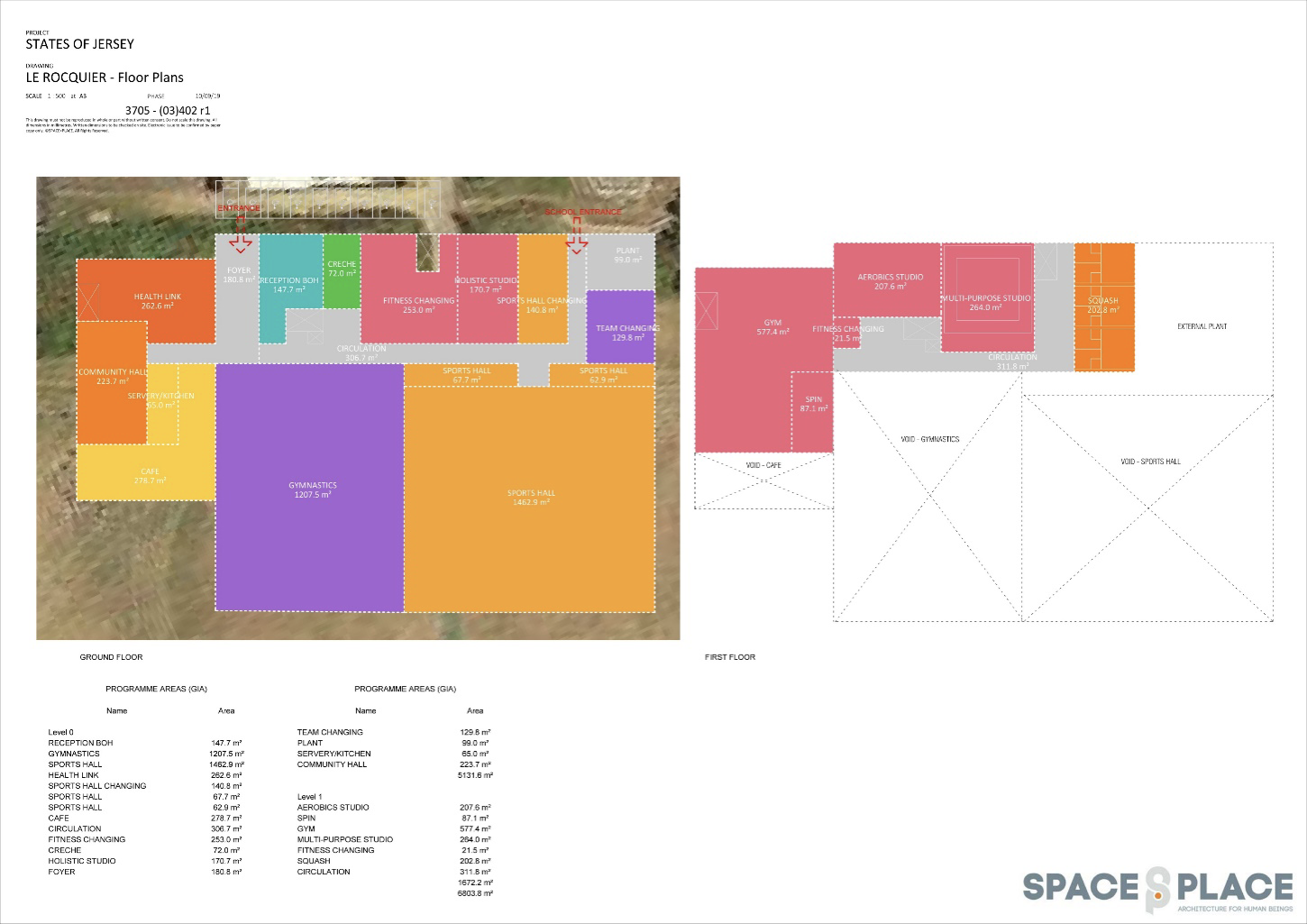 Pictured: The Government's timeline puts Le Rocquier's facilities as the first of the new buildings to arrive, coming in 2024/2025.

This, the document says, should address the key issue of "a lack of provision" in the East highlighted by individuals and clubs during the consultation process.

The Le Rocquier 'hub' will include:

Separate to the existing leisure centre, the new development at Les Quennevais is to be split into two phases.

The first a new 3G pitch, and potentially a skatepark.

Explaining why they had split the process for the site and deliver these aspects of the site early, the Government cited "the need to deliver the netball and skatepark facility as a priority, but also the opportunity to deliver a community 3G pitch to meet the training and fixture requirements for football clubs, thus taking pressure off existing grass pitch sites."

It was originally envisaged that the site would also accommodate netball, but it was later decided that tweaks to the Oakfield site would deliver this part of the strategy sooner.

It comes after consultants KKP - who wrote the strategy document - concluded Springfield Stadium would have insufficient capacity (currently 1,000) to hold events such as the Muratti, as well as support the growth of football and ensure that the Jersey Bulls "can meet its requirements for promotion into the higher league." 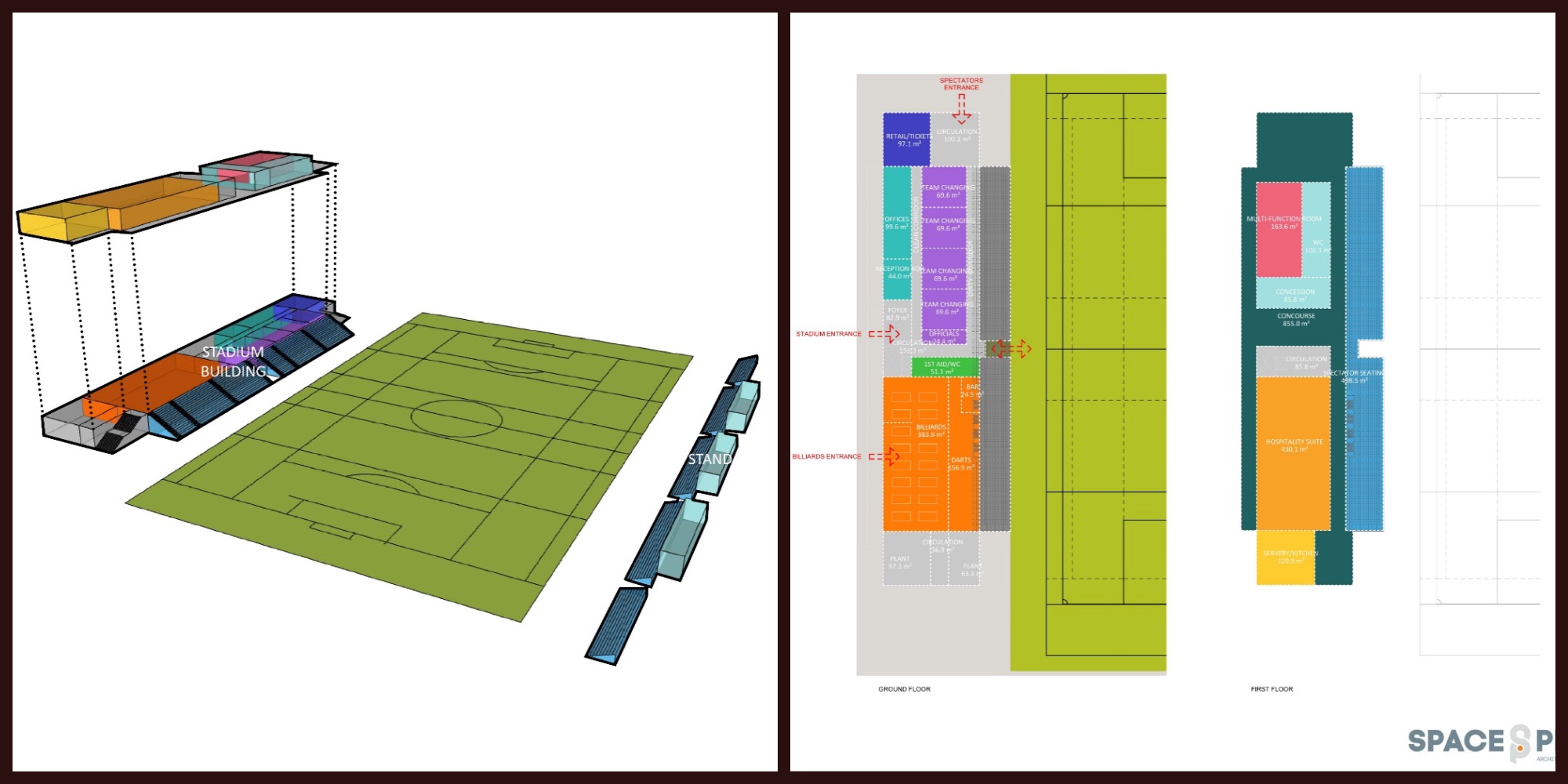 Pictured: A new location for the Island Stadium is yet to be decided on.

Like the rest of the projects, funding has not yet been figured out, though the report says it "will require public/private partnership and it is likely private funding will be required" to make it a reality.

Similarly, a location is yet to be found, although it has been confirmed that the Fort will not be in the running as a potential site.

Core features of the stadium would include:

However, the strategy notes that Springfield will not be altered until the Stadium is built.

If the Island Stadium is developed and built, Springfield's existing leisure centre will be refurbished and condensed into "a smaller, more compact public sport and wellbeing hub offering a combination of indoor and outdoor sports facilities, health and fitness as well as a community health premises." 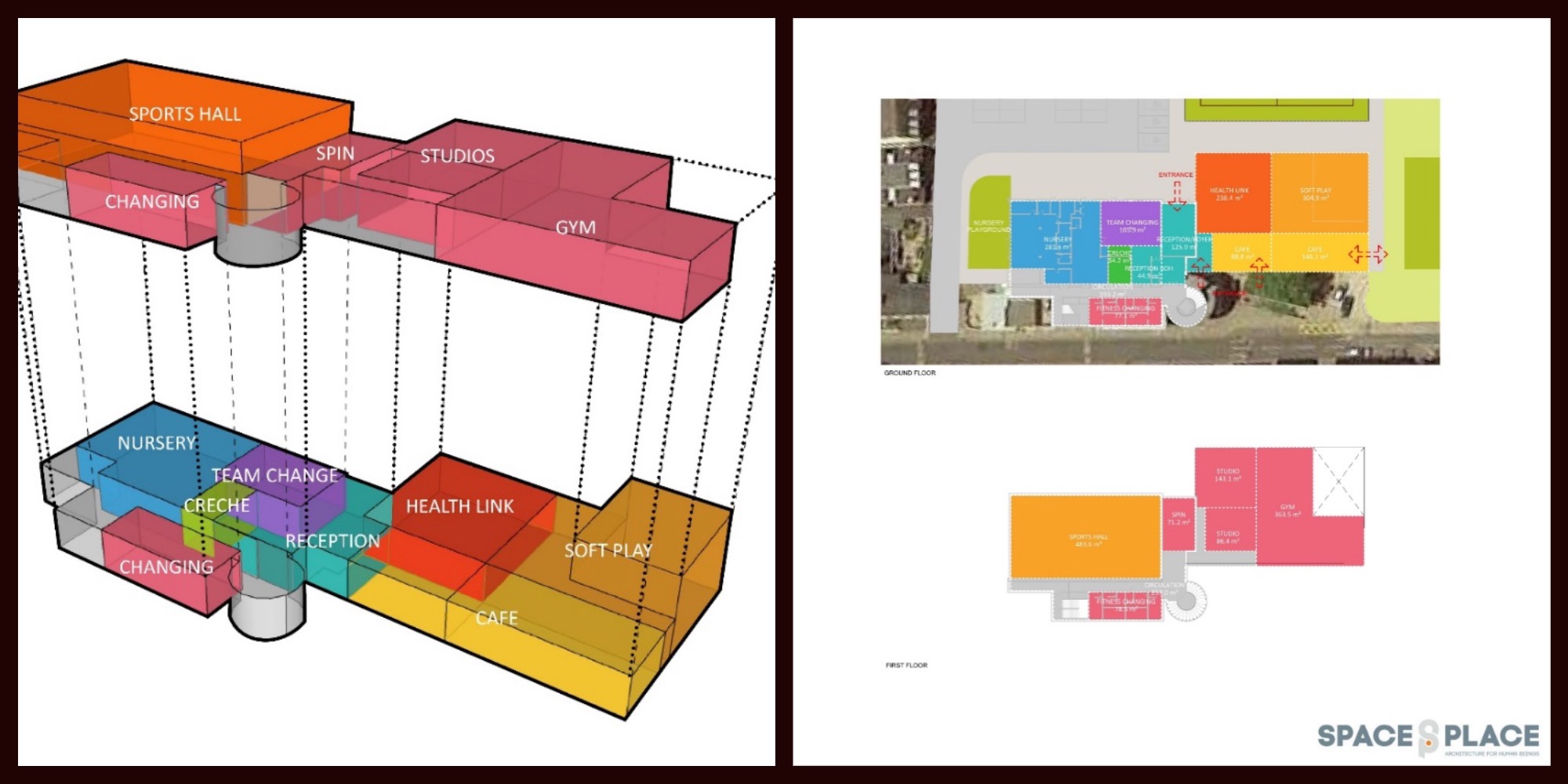 Pictured: Plans for Springfield Stadium would see its leisure facilities condensed and remaining outdoor area transformed into a community park.

The stadium pitch would also be transformed into two five-a-side pitches, with the remaining site turned into a community park "with the potential for a destination outdoor play facility."

Other facilities would include:

A new St. Helier multi-purpose facility, built for 2030, is described in the plans as "the main swimming and fitness facility on the island," which will accommodate most Fort Regent members.

Pictured: St. Helier's facility would be the "main" central fitness facility on the island.

With the Jersey Development Company looking to create a new island community in the Waterfront, the strategy says that the Government and the JDC are "working jointly to identify the most appropriate location to develop a new town centre sport and wellbeing hub."

With the lease to multiple Waterfront facilities being broken in 2027, the aim will be to have a full facility up and running by 2030, complete with:

Though there is no guarantee it will be based at the Waterfront, plans also state that if it is, "there may be an opportunity to develop a residential block above part of the facility", creating potentially 90 apartments across three floors.

Finally, Les Quennevais will complete phase two of its redevelopment into a "sport and wellbeing hub" by 2032, rounding off the strategy.

The facility will also include a 'health outreach' facility, branch library and community hall, which the strategy says will reinforce the role of physical activity in health and wellbeing. 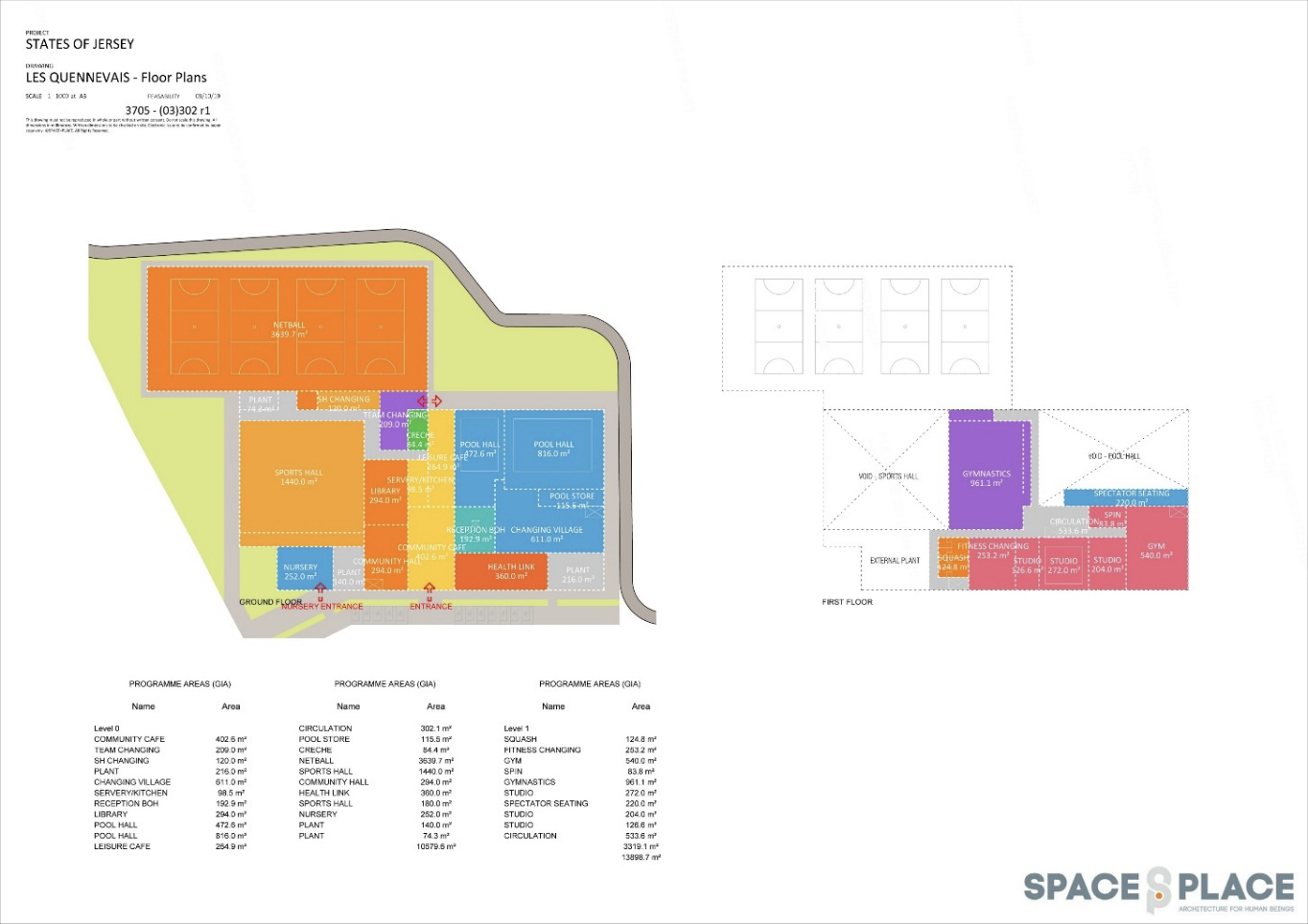 Pictured: The second phase of Les Quennevais' new development will be the last step in the strategy.

The old leisure centre will then be demolished, with its remaining footprint used to extended parking for the new site.

The full facilities planned for the eventual site are: